Dynasty Running Back Sell Candidates for 2023 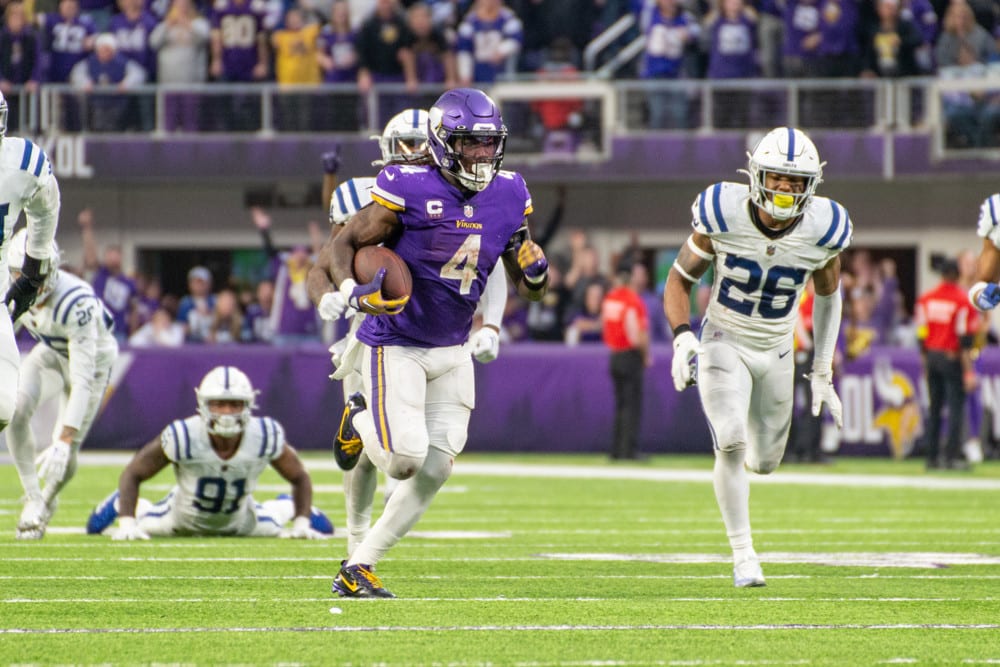 Dynasty Running Back Sell Candidates for 2023

Today we are going to talk about Running Backs you need to move on from in dynasty and their trade value. The running back position can be highly frustrating in dynasty leagues, especially for new dynasty players. Historically redraft has really valued the RB position and in a dynasty, it is much more like the NFL. The volatility at the position and the short shelf life really devalues the position.

Just looking at the list, you can see that you might be a year too late on selling and you lose profit by doing that.

Henry is obvious and has been the pick for the last 2-3 seasons. Last season he was on fire scoring 24.2 (PPR) fantasy points per game, but he did miss 8 games. This was no surprise after he had 681 carries and over 700 overall touches the previous 2 seasons.

Henry has been a workhorse and the time is coming. On a positive note, he has been healthy this year. He missed Thursday’s game last week, but most speculate that he would have played if the game had some meaning.

Austin Ekeler is a player whom a lot of people will break the rule because of his usage. We will find out here soon. He didn’t slow down this year with a career-high 22.1 (PPR) fantasy points a game. Ekeler has been used in the passing game with 381 receptions on 484 targets in the last 6 seasons. Ekeler has had 790 carries in that span as well and has only had 200 rushing attempts or more in one season (206).

Ekeler had 301 carries in his first 4 seasons. In the past 3 though he has had 116, 206, and so far this season 183 rushing attempts. His unique career arc and usage will make for an interesting case study. This could allow him to break the standard and this hope also allows you to trade him for more.

James Conner has had a resurgence with the Cardinals and last year he was a huge value for fantasy football managers. This year we saw the regression and we saw the injuries pop back up. However, since returning from injury Conner has been one of the best fantasy Running Backs in football. Conner is under contract for 2023 and this late-season resurgence could help open up a selling window.

Assuming Kingsbury returns is a questionable thing, but if he does return it will help Conner. The Cardinals have had great fantasy RB production under Kingsbury with different backs. That being said, Conner is a 27-year-old back and the Cardinals could look to replace him soon.

I would stash Keontay Ingram, but I would not be surprised if the Cardinals brought in a back next year either. I have sold all of my Conner shares and I suggest you do too.

James Conner and Leonard Fournette were 2 screaming sales the last off-season. Both of these players were regression candidates and aging assets. If you kept Fournette and you still have him on your roster, this season has been tough. His value really sank at the midpoint of the season with injuries and inefficiencies. This was made much worse by the emergency of Rachaad White.

Since returning from injury though, Fournette has out-snapped White which has also brought some decent production. Hopefully, this can open up a small sell window, especially if you have no trade deadlines. The Buccaneers do have him under contract, but they can get out of that too if necessary.

This could be trouble if Fournette were to go to a new offense. An offense where he is not getting the type of targets and goal-line looks he has gotten in Tampa.

Alvin Kamara is a player that has had high efficiency and lower usage throughout most of his career. Similar to Ekeler, he has only had one 200+ rush attempt season in his 6 seasons. Kamara has three seasons of 100+ targets for four 80+ catch seasons. Kamara really misses Drew Brees and Sean Payton. Kamara has only had 47, and so far 55 catches in the last 2 seasons.

In 2021 he had 18.1 fantasy points per game and this year he is down to 14.7 fantasy points per game. Kamara appears to be heading for a breakup with the team and a potential suspension is also looming. Kamara is also going to be 28 years old next season. He will be a harder player to sell right now, I would recommend holding until we get some news.

If he gets traded or we get some news that confirms his return it will give you an opportunity to sell. A trade would be the best-case scenario for Kamara managers based on his recent usage.

Aaron Jones is another player that has really not gotten that bellcow type of usage. Jones had 236 and 201 rushing attempts in 2019-2020. The Packers typically have had a compliment to Jones with Jamaal Williams and now A.J. Dillon. Jones carried the ball 171 times last year and 187 times so far this year. His targets have been consistent with 68,63,65, and so far 65 in the past 4 seasons.

Unfortunately, his performances have been inconsistent on a week-to-week basis. Jones has had some massive games, but has been known to disappear at times. In the last 2 seasons, he has had 15.3 and 15.2 (PPR) fantasy points per game. Much lower than 2019-2020 when he had 19.7 and 18.5 fantasy points when he was rushing more.

Jones could be a cut candidate or see a restructure this offseason. The team has an opt-out in 2023 that would save the team about $10 million over the next 2 seasons. Jones restructured this offseason, but there is no way the team carries his $20 million cap hit in 2023. There is $9.58 in the dead cap that the Pack would have to eat if there is no trade, cut, or restructure.

Speaking of contracts, Ezekiel Elliot carried over $30 Million in dead cap in 2022. The team can move on from Zeke in 2023 as there is an opt-out in his current contract. Zeke is under contract until 2027, but the team could save almost $40 Million over the next 4 seasons if they moved on from Zeke in 2023. His dead cap is $11.86 million of the $50 million left on his contract.

The team also has the decision to make with up-and-coming star Tony Pollard who happens to be a free agent in 2023. The fantasy community has been screaming for more Pollard and we finally got it. Zeke has shown regression in each of the last few seasons in broken tackles, yards after contact, and yards per carry.

Dalvin Cook peaked for fantasy football in 2020 with 24.1 fantasy points per game. Cook has missed a handful of games in each of the last few seasons, a lot of them in the fantasy playoffs. We have all valued Alexander Mattison as a premium handcuff as this has been expected. This year Mattison has been used more often and Cook has been used less.

The good news is that Cook has not missed a game yet. The bad news is that he is down to 15.2 (PPR) fantasy points per game. His points per game have gone down in each of the last 3 seasons. Cook, like Elliot, could find himself on the roster bubble due to his contract. The team has an opt-out in 2023 with $6 Million of Dead Cap of the $27 Million left of his deal.

This would save the Vikings almost $21 Million over the next 2 seasons. Cook is very cuttable in 2024 where his cap hit is $15 Million with only $3 Million in dead cap. Alexander Mattison is an unrestricted free agent in 2023 as well. Expect something to happen with his contract if we don’t see him cut or traded this off-season.

Jamaal Williams has had 14 touchdowns this season. He is a free agent in 2023 and regardless if the Lions bring him back or not, this is hard to repeat. We saw the regression come with James Conner and Damien Harris, you should have already traded high.

Dameon Pierce and Tyler Allgeier have been great stories this season. Pierce at the beginning and Allgeier at the end of it. Both players are on rebuilding teams with a lot of unknowns. We saw James Robinson who was even more productive and wasn’t safe when the Jaguars drafted a 1st round Running Back. We saw Elijah Mitchell have a great season before seeing his value nuked by the Christian McCaffrey trade.