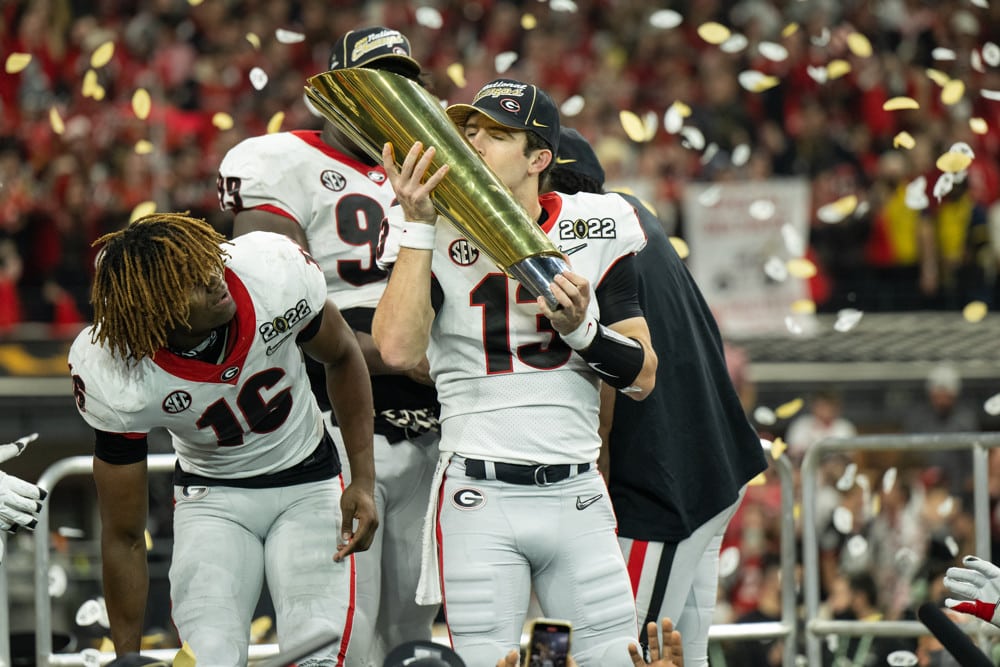 Is your college football bowl game pick ’em entry already wrecked? Whether it is or not the Sports Gambling Podcast Network is giving you a chance to win $200 worth of merch from the SGPN Store! All you have to do is download the SGPN app and enter the “SGPN CFP Prop Contest.”

In the contest there are 22 different college football playoff predictions you will need to make varying from CFP ATS Picks to props. You will need to outperform the entire field in order to claim the cash. Will you go contrarian or chalk? I’m going to do my best to handicap each offering. It’s your job to copy 21 of my 22 picks and then correctly change one to win the $200 Gift Card prize.

In the Big 12 Championship game Kansas State ran for 208 yards on TCU’s 64th ranked rush defense. Although Michigan’s star running back Blake Corum is out for the rest of the season with a left knee injury, his backup Donovan Edwards is better than good. Edwards has 872 rushing yards on the season, with 216 vs Ohio State on 22 carries, 173 vs Penn State on 16 carries, and 185 vs Purdue on 25 carries. All of it coming behind the nation’s #1 offensive line that won the Joe Moore Award.

The Wolverines were the only team from the 4-team invitational that didn’t have a Heisman candidate. With a chip on their shoulder, a business-like attitude aiming for a rematch with Georgia, this game feels like our annual CFP Blowout classic. Through the first eight years of the College Football Playoff, 24 games have been played. Eighteen of those games were decided by at least 11 points, including all six in the last two years.

We’ve been building all year for this. The playoffs are upon us!#GoBlue pic.twitter.com/GqLNLRMFlq

Throughout the year both squads have been great second half teams. I think we can see a slow start in the first half with both defenses trading blows. Then in the second half, like a prized boxer, the Wolverines OLine proves they’ve worn down the TCU defense and the running lanes begin to open. With a steady run game diet for both teams throughout the game the under seems like the play.

This is a shot in the dark. Like I mentioned above both teams are great second half teams, because they’ve shown they both have the tendency to start slow. If you want to differentiate yourself from the pack this is a great place to do it.

Depending on which sportsbook you look at Max Duggan’s passing yards prop is 30 yards more than JJ McCarthy’s. It sounds like a plus EV play to me.

JJ McCarthy has thrown for two or more touchdowns in seven of Michigan’s 13 games. He has thrown three in back to back games against the Buckeyes and Boilermakers. Usually when the Wolverines get inside the 10 yard line they run the ball across the goal line.

I’m in the belief that Jim Harbaugh’s offense will also get most of their big plays on the ground. In a lower scoring game as I predicted it’s best to take the under here.

Max Duggan’s over 1.5 passing touchdowns prop has hit in 9 of his 12 starts for TCU. In saying that, all three of those unders have occurred in the Horned Frogs’ last four games, and the one game he went over was against Iowa State.

The Cyclones were worst team in the Big 12 this year. I’ll take the under 1.5 because I am on the game’s under. This helps us differentiate ourselves from the rest of the pack thinking that the Heisman candidate will throw two TDs.

Michigan is routing Ohio State in the second half!!! #GoBlue #CollegeFootball

In games where Kendre Miller has had 12 or more rushing attempts the over 79.5 has cashed in 9 of the 11 games. I think TCU will have an offensive game plan to run the ball early and often. Michigan’s rush defense will be the best rush defense the Horned Frogs have faced so far this season.

With enough volume, I still think Miller can hit this over. I’d say the magic number is 17 carries. If you want to be contrarian this wouldn’t be a bad spot to fade the trends.

Since week 7 when Michigan played Penn State, Ronnie Bell has only hit the over 54.5 in two of the seven games. Harbaugh’s offense has effectively schemed Bell out of being the go-to receiver and has become more reliant on their tight ends in the big games.

Quentin Johnson is TCU’s deep threat. He has only hit the over 70.5 in 5 of the 12 games he has played in. Although, his average reception is 17 yards. If you think Max Duggan will hit some home run balls this may not be a bad spot to diversify yourself.

Cornelius Johnson only scored a touchdown in four games this season. I’m not going to get spicy here.

In the SEC Championship game the 37th ranked passing offense (LSU) threw for 502 yards against Georgia and half of the yards were thrown by their backup QB. If there was one weakness of the Bulldogs football team it comes on the defensive side of the ball when the opposition has speed on the outside. It’s why we always see higher scoring games than we expect when Bama plays UGA.

Now Ohio State with CJ Stroud and the 14th ranked passing offense strolls in to Atlanta, Georgia. The problem is the Bulldogs still beat LSU by 20 points. Another problem is that the Buckeyes’ defense absolutely folded in the second half against Michigan. The Wolverines have a very similar playstyle to Georgia which is haunting.

There is undeniable heat on Ryan Day’s seat right now. The Buckeyes are lucky to be receiving a second chance. We’ve seen this story in sports plenty of times. A team with their back against the wall is a dangerous team. A team hunting for another shot to play their #1 rival is a determined team.

Lastly, more than 75% of the bets and money are coming in on Georgia but the line has stayed firm. Ohio State +6.5 is my pick for this game. The Bucknuts may even win outright. Feed me the best rivalry in football as a rematch in the College Football Playoff National Championship.

Like I mentioned above, we’ve seen these defenses recently not at their best against competition that is arguably not as good as the opponent they will face in this game. I think these offenses both explode in production and we could maybe see this game climb into the 80s.

Again going back to my main handicap, I think CJ Stroud and Ohio State will throw all over Georgia’s defense. The Bulldogs do like to throw the ball a lot themselves but I think Michigan has laid out a strong game plan on how to beat OSU and UGA should be more focused on pounding the rock.

Stetson Bennett has thrown two or more touchdown passes in eight of Georgia’s 13 games this season. In his last seven games Bennett has only not thrown 2 TDs once. If the game script goes to plan and we hit the over, Stetson Bennett should cover this.

In six games this season CJ Stroud has thrown FOUR or more touchdown passes. Stroud has only not thrown two TDs in three games. Those three games actually were in a span of their last five games so that’s a little nerving. Again, if the game script goes to plan and we hit the game total over, CJ Stroud’s over shouldn’t be a sweat.

It’s hard to draw any trends from Miyan Williams’ year. He played through injuries and was the backup behind TreVeyon Henderson most of the time. However, in games that Williams ran the ball 10 times or more the over 66.5 was 6-1. It’s a little nerving that he’s facing the #1 rush defense in the country. This feels like a total coin flip.

Kenny McIntosh has only surpassed 57.5 rushing yards four times this year. Georgia’s offense is very balanced, looking at it on paper there isn’t a star player. Stetson Bennett has kind of been shoved into the limelight by the National Media even though his stats don’t jump off the page. Last year nobody saw Bennett’s emergence in the semifinal game coming. This year I think the roles are reversed.

I think Georgia should focus more on the run game against Ohio State. Since week 3 McIntosh has averaged 5.4 yards per carry. If Georgia focuses on the run just a tad bit more than normal, McIntosh’s over is a great place to differentiate ourselves from the pack of contestants.

Marvin Harrison Jr. has received more than 85.5 yards in exactly half of his games this season. Some of those games Harrison played through injuries as well. If you’re in the camp that thinks this game will go over, and that Ohio State will be able to pass the ball effectively, Harrison is going to get his.

Ladd McConkey has one less reception than Brock Bowers on the year, but 40 less yards. McConkey has only cashed the over 60.5 receiving yards in five of Georgia’s 12 games. McConkey has also been on the injury list throughout the December break due to a knee injury. The under seems likely. However, I think there could be 80 points scored in this game.

Ladd McConkey is a chunk play guy, averaging 9.1 yards per target, and 13.2 yards per reception. I’m going contrarian and taking McConkey’s over receiving yards where I think a lot of people will be on the under.

Georgia’s big tight end has only scored a touchdown in four games so far this year. Betting on touchdowns is like flipping a coin on plus odds. Sometimes it’s a good idea to bet it. Books have Bowers to score a touchdown listed at +105. I think Georgia knows what they have to do against Ohio State. Implement the Michigan game plan.

The Wolverines ran the ball a lot but they also used their tight ends for chunk passing plays. Colston Loveland scored a 45 yard touchdown against the Buckeyes. It’s not far fetched to say the Bulldogs’ most reliable pass catcher finds the end zone.

In case you couldn’t tell by reading the previous 21 picks, I’m a Michigan die hard. Give me the Wolverines to win the whole damn thing!

Michigan has had their goals set on revenge against Georgia and to win the National Championship all year. I think JJ McCarthy being more mobile at the QB position than Cade McNamara for a full 60 minutes will help out Michigan’s offense a lot. I believe that Donovan Edwards is actually a better running back than Blake Corum.

Lastly, Michigan’s defense doesn’t ONLY have one dude on each level with Aidan Hutchinson, David Ojabo, and Daxton Hill. Yes, all three of their best defensive players from a year ago are in the NFL but the Wolverines replaced those three players’ production with an entire unit.

Each and every week players on this defense are getting better, emerge into the spotlight, and make plays. I firmly believe in Jim Harbaugh to get the job done and bring Michigan back to the mountain top.

Hail to the Victors and Go Blue!