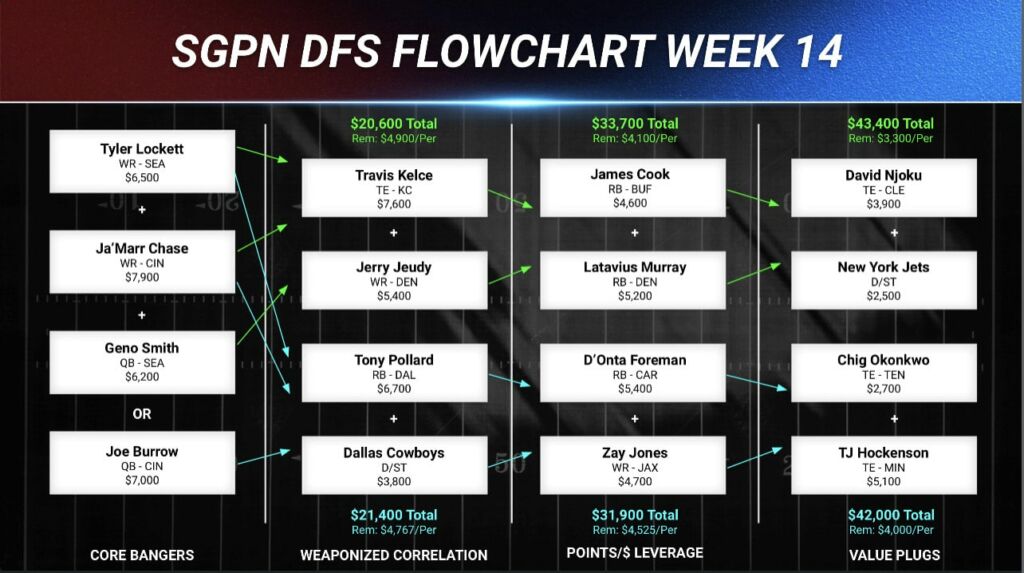 It was a rare off week for me on DraftKings last week. The lineups with the beautifully leveraged Jalen Hurts-AJ Brown stack were accompanied by dud players and injuries. Such is life as a DFS manager. No one is immune to the brutality.

Like a closer in baseball, you need thick skin and a short memory. The ebbs and flows will give and take in a ruthless fashion and that’s why we bring you the Week 14 NFL Flowchart presented by SGPN.

The Week 14 main slate is condensed by two games to 10 on Sunday. The chalk is chalkier, which means the leverage has more levity. Everyone and their mom (and my mom) will be piling their entries with weapons from the Detroit-Minnesota game.

For cash games and small-field, limited-entry tournaments go for it. For those of us in the mean streets of GPP, having too much chalk is just writing someone else a check. Be unique and proud of the sneaky guys that most others aren’t rostering.

The DFS Flowchart is a visual aid that I use to outline my strategy for a given slate. It provides all the pivot points based on salary, correlation, and ownership. I use a larger one for my entire player pool, but there are so many arrows that it looks like I’m trying to prove Bigfoot exists. Transport yourself into the hellscape that is my imagination and manifest some optimal winners this week.

I like QBs who throw the ball a lot. Surprisingly, the Bengals will be more chalky on the ground with Joe Mixon at his price point against a horrendous Browns run defense. Joe Burrow is projecting at about 10% ownership, putting him quite a bit lower on the popularity scale than Jared Goff and Kirk Cousins. He is still tracking to be the most likely QB to be in an optimal lineup (RunTheSims). Ja’Marr Chase looked fantastic in his return from a hip injury last week and his salary on DK hasn’t quite caught up yet. That should be fun.

The Seattle backfield is an injured mess. The combination of Travis Homer and Tony Jones is pure gut-wrenching horror, so I expect the Seahawks to air it out plenty versus the Panthers. I could go either way with Tyler Lockett or DK Metcalf (or both). They will both have favorable matchups and plenty of opportunities against a weak defense with virtually nothing to play for.

Geno Smith has only attempted fewer than 30 passes three times this season. Since Week 7, he has chucked it no fewer than 33 times in a game. I predict he will eclipse 40 attempts for the second time and be a lock for the 300-yard passing bonus on DraftKings.

Weeks as a top-10 PPR RB this season:

If Travis Kelce is on the main slate and under $8k, I am getting reckless with exposure. Denver has a strong defense, but Kelce has only put up consecutive games with fewer than 10 PPR points twice in his entire career. This will not be the third occasion. I picture this division game to offer a bit more excitement in the scoring department, so I’ll be playing a lot of Jerry Jeudy.

He is lethal versus man coverage, which is a staple of the Steve Spagnuolo defense. Russell Wilson will hopefully overcome his extreme inefficiency with pure passing volume in a likely negative game script.

Last Sunday night was quite a game from a Cowboys fan’s perspective. The Colts imploded in the fourth quarter under the pressure of an elite pass rush and the rushing attack with Tony Pollard and Ezekiel Elliott was too much to handle. Dallas has a dream matchup for a similar scenario to present itself again. Their intra-state rivals the Houston Texans are vying for the top pick in the draft and sport the league’s worst run defense.

Both Pollard and Elliott are solid RB plays, but I am infatuated with stacking Pollard with the Cowboys’ DST. It makes sense from an upside point of view, but also with balancing the popularity of the Dallas defense. Both plays are in solid double-digit chalk territory, so pairing them can alleviate that slightly.

Baker Mayfield threw for 231 yards and 1 TD in a win after being with the Rams for 2 days.

There is a ton of chalk all over the RB scale, but I have my sights set much lower on this slate. I would rather fit in more explosive leverage plays at WR, which is just plain difficult with pricey RBs. James Cook was the lead back for Buffalo last week and looked good in the process.

His salary is really low still and looks like a pretty nice play against an obvious run funnel Jets defense. Latavius Murray is trending toward a high ownership percentage but also has a high likelihood of appearing in optimal lineups.

The only value-priced RB whose optimal rate is matching his ownership projection is the Panthers’ D’Onta Foreman. He will be the lead back yet again and has been as steady as it gets since the Christian McCaffrey trade. Chuba Hubbard is a longshot dart throw too (if you’re into that sort of thing).

The most likely player to appear in optimal lineups at any position this week is Zay Jones. He was chalky as all hell last week and let the sheep down. As a result, he is a sparkling play this week with a fraction of the ownership.

David Njoku could have saved us during the worst week for TEs in recent memory…if he was healthy enough to play. He is going into Sunday’s game against Cincinnati without an injury designation. This excites me to no end because Deshaun Watson will have an easier time shaking off the rust with a freak athlete as a security blanket.

Kevin Stefansky ran his men out there with a ridiculous pass-heavy attack against the strongest run funnel defense in Houston last week. If he didn’t learn from that stupid mistake in judgment, the Browns will put plenty of passes in the air again. Hopefully, the results will be much better in this clash of hated division rivals.

I am all in on the talented rookie TE from Maryland, Chig Okonkwo. He usurped Austin Hooper on the depth chart last week and has been a big play waiting to happen all season. Tennessee draws Jacksonville this week and will be without their other stud rookie Treylon Burks. Okonkwo is dirt cheap on DraftKings at $2.7k and is not trending to be chalky at all for some reason.

Other than a ridiculous amount of exposure to the Cowboys’ DST this week, I will occasionally need to spend down at the position. Behold, the gloriously leveraged Jets DST. They are only $2.5k and in a rematch against the mighty Buffalo Bills. In their last meeting, they sacked Josh Allen five times and intercepted him twice en route to a double-digit fantasy effort. I say they do it again and really get us into a more optimal build with the savings.

INJURY UPDATE: @Browns TE David Njoku (knee) is planning to practice this week with the possible return to action in Week 14 pic.twitter.com/mNYN0Z0JOg

Thanks for checking out another Week 14 NFL Flowchart presented by SGPN. Be sure to check back daily for more fantasy football content from the Sports Gambling Podcast Network.