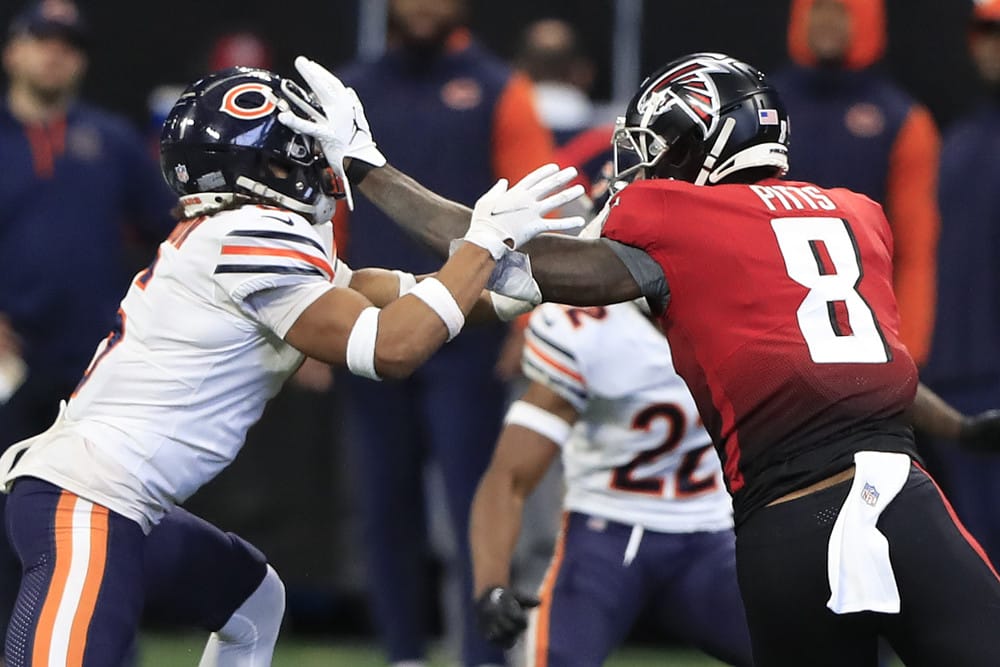 The Fantasy Football playoffs are right around the corner, and you need to know who you can trust to produce in your lineup. The injury bug is non-stop in the NFL, with multiple key fantasy players going down each week.

Not all injuries are created equal, and it’s important to fully understand the injury your player is dealing with. In this article, I will be breaking down the biggest fantasy football injuries and providing guidance on how to handle them. Welcome to the Week 12 Fantasy Football Injury Report!

Note: This injury report will be updated until the conclusion of Week 12. For the most current injury news and analysis, follow me on Twitter @SGPNFootballDoc!

Despite not having a great year, the Atlanta Falcons are still squarely in the NFC South division race. However, losing their star TE for likely the rest of the season is not going to help their chances. Falcons TE Kyle Pitts has been placed on the injured reserve with an MCL tear that will need surgery to repair.

The MCL is a ligament located on the inner (medial) knee, and it plays a major role in lateral (side-to-side) stability. With a complete tear of the MCL, it takes between four and eight weeks to recover from this injury. With only six weeks left in the NFL season, Pitts will be missing at least four games on the IR. His fantasy football season is over, and his NFL season is likely over as well.

Falcons TE Kyle Pitts will be out for at least four weeks with a torn MCL. – DROP

Chicago Bears QB Justin Fields has been carrying his NFL team and many fantasy football teams. For a young player who was just seeming to hit his stride, it’s unfortunate he finds himself on the Week 12 injury report. Fields injured his shoulder late in the game and has been labeled as “day-to-day.”

The injury is reportedly an AC joint injury in his shoulder, which refers to damage to the AC joint, which connects your shoulder to your collarbone. This joint allows for full movement of your arms and shoulders, which is vital for a quarterback’s throwing motion. The typical recovery timeline for a grade 1 injury is one to two weeks, while it is four to six weeks for a grade 2 injury. Fields’ is going to have to fight through the pain on almost every throw.

Fields is not expected to play this week as he has been limited all week. – SIT

#Bears QB Justin Fields describes his left shoulder injury as a separated shoulder with torn ligaments — "basically an AC joint injury." It was described to me on Monday as a dislocation that can cause torn ligaments.

Fields far from 100% going forward, with his status TBD.

The Cincinnati Bengals are looking to turn their season around after a slow start to the year. To have their best shot at a playoff birth, the Bengals are hoping their star RB is not on the Week 12 injury report for long. Joe Mixon suffered a concussion last week against the Steelers and is in the NFL’s concussion protocol. A concussion is a mild traumatic brain injury that leads to disruption in the function of the brain. Research has shown that most NFL players return to playing in less than seven days from injury. However, this injury does provide uncertain expectations.

Concussions are still largely a mystery, and everyone’s recovery can be different depending on the symptoms. The league has a standardized protocol requiring players to complete five steps before being able to play, including a full practice to be medically cleared. As of Wednesday, Mixon is still not practicing, and his practice status will need to be monitored throughout the week. Back-up RB Samaje Perine filled in nicely last week and would be in line for more work this week if Mixon is unable to play.

Joe Mixon has been ruled OUT this week. – SIT

The Kansas City Chiefs continue to string together wins despite their lackluster ability to run the ball. This running game will have to overcome another hurdle as one of the team’s top backs is out for several weeks. RB Clyde Edwards-Helaire suffered a high ankle sprain last week and has been placed on the injured reserve.

A high ankle sprain refers to damage to the ligaments (syndesmosis) connecting the lower leg bones above the ankle. These ligaments serve as shock absorbers and play a role in stabilizing the lower leg during running and jumping. A mild high ankle sprain typically takes between four and six weeks for a full recovery. Edwards-Helaire’s route running and cutting ability would be hindered upon return due to the injury.

RB Clyde Edwards-Helaire is OUT at least four weeks with a high ankle sprain. – DROP

Chiefs placed RB Clyde Edwards-Helaire on injured reserve due to his high ankle sprain. He’s now out a minimum of four weeks.

The Chargers finally thought they were past their offensive injury woes, but the Week 12 injury report tells a different story. Los Angles WR Mike Williams suffered a high ankle sprain a few weeks ago, which caused him to miss two games.

He was originally expected to miss at least four weeks. This recovery timeline is consistent with a grade 1 or mild high ankle sprain. However, Williams returned in just three weeks, which proved to be a big mistake. He aggravated his ankle injury and was ruled out for a large portion of the game.

Even in mild cases, these injuries involve significant damage to ligaments above the ankle, which help to stabilize the leg. Typically, a re-injury causes reason for concern as more ligament damage is to be expected. William’s route running, run-after catch, and jumping ability will all be hindered until his ankle is fully healed.

Williams aggravated his ankle sprain and is OUT for this week. – SIT

Brandon Staley says that WR Mike Williams aggravated his high ankle sprain, but it is not considered significant and that they'll know more in the coming days regarding availability.

Los Angeles Rams QB Matthew Stafford finds himself right back on the injury report in Week 12. After playing the entire game in Week 9 and having no apparent head injury, it was revealed a few weeks ago that Stafford was in concussion protocol. A concussion is a mild traumatic brain injury that leads to disruption in the function of the brain. The brain is vital to processing information quickly and helping players to react on the football field.

Research has shown that most NFL players return to playing in less than seven days from injury. However, this injury does provide uncertainty as concussions are largely a mystery, and everyone’s recovery can be different depending on the symptoms. The league has a standardized protocol requiring players to complete five steps before being able to play.

Stafford was unable to clear the concussion protocol two weeks ago and ultimately missed the game against Arizona. He was then able to play against New Orleans last week but was knocked out of the game with another concussion. Being right back in concussion protocol only a few days after exiting and also suffering a neck injury has led to the team ruling him out for this week. This is the best situation for Stafford’s long-term health.

Stafford suffered a second concussion in two weeks and is OUT for this week. – SIT

Another QB change: Rams' HC Sean McVay has ruled out QB Matthew Stafford for Sunday's game vs. the Chiefs due to what the team believes is a strained neck.

The New York Giants have been one of the most injured teams in the NFL over the last decade. Unfortunately, the Week 12 injury report wouldn’t be complete without one. Rookie WR Wan’Dale Robinson recorded his first 100-yard game of the season last week, and then tragedy struck.

Unfortunately, he landed awkwardly while being tackled out of bounds and suffered a torn ACL. Robinson is officially out for the season and will be facing about an 11.5-month recovery timeline. The ACL is the primary stabilizer of the knee and allows a player to quickly change direction on the field. It is unlikely Robinson will be fully recovered to begin next, and normal movement and mechanics may not come back for a full two years.

Rookie WR Wan’Dale Robinson is OUT for the season with an ACL tear. – DROP

One of the league’s best young players is looking to make his return to the field and off the injury report in Week 12. The Bengals top WR and fantasy football stud Ja’Marr Chase injured his hip several weeks ago against New Orleans. He was able to play through it initially but apparently reinjured the hip.

Chase has missed the past four weeks with this injury, and his recovery table initially was between four and six weeks. Unfortunately, the specifics of the injury are undisclosed at this time. What we do know is that Chase has finally returned to practice this week. The Bengals are being noncommittal on whether Chase will be playing this week, so we will have to see how his hip tolerates the practice load.

Bengals’ WR Ja’Marr Chase is dealing with a hip injury that is expected to sideline him 4-6 weeks and makes him a prime candidate for injured reserve, per sources. Chase visited with a hip specialist Wednesday and is seeking more answers about his injury.