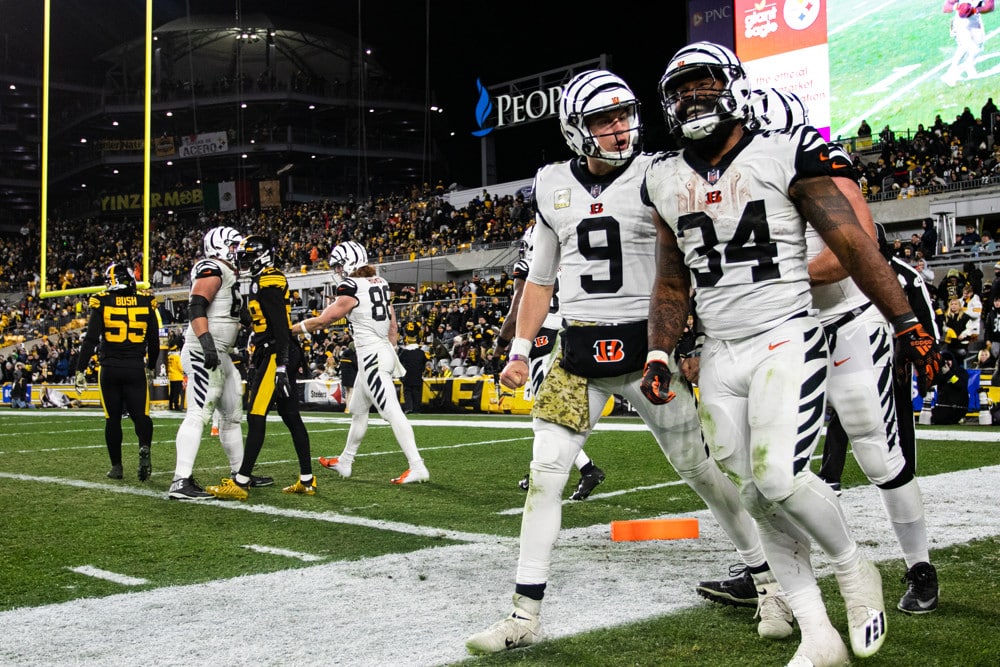 Week 11 is in the books, and SGPN is here with the instant Early Week 12 Waiver Wire targets. There are only a few weeks left of the fantasy football regular season, so it’s time to make haste on the best available waiver wire options.

Whether it was key injuries or matchups, there were a few players that shined in week 11 that are readily available on your waiver wire. Let’s dive into some of the best options coming off week 11 play.

Perine broke out in week 11 with three total touchdowns, four catches for 52 yards, and 11 carries for 30 yards. Perine filled in for Joe Mixon, who left the game early with a concussion. We’ll get an update on Mixon in the coming days, but you should be ready to pull the trigger on Perine immediately.

He thrived with the given opportunity, and while he may not feel like a safe fantasy football asset, he could have a few valuable starts if Mixon were to miss a game or two. The Bengals are on the road in week 12, playing the Tennessee Titans. The Titans are a solid defense against running backs in fantasy.

Perine would be a flex play with good volume if Mixon misses week 12. Perine is rostered in just 8% of fantasy football leagues; it’s likely he’s available on your waiver wire.

Demarcus Robinson came out of nowhere this week and cleaned up production for the Baltimore Ravens. It was by far his best week of the campaign. He collected nine catches on nine targets for 128 receiving yards. Lamar Jackson and the Ravens offense struggled against the Carolina Panthers, but Robinson was able to shine by collecting 62% of the total passing yards available. Robinson and the Ravens get the Jaguars on the road in week 12. They allow the most fantasy points to wide receivers in fantasy.

I’m not sure I’m confident going back to well expecting this level of production in back-to-back weeks, but the week 11 production plus this upcoming matchup certainly warrants his rostership. I suggest adding Robinson to your waiver queue and maybe spending a little extra FAAB on him.

The Ravens’ passing offense may very well funnel back to Mark Andrews going forward, but Robinson is definitely worth rostering this late in the year. Like Perine, he’s available in the majority of fantasy football leagues. He’s rostered in just 4% of fantasy leagues.

I was surprised to see Treylon Burks is rostered in just 20% of fantasy football leagues. Seems like that rating would be higher with him returning from injury a few weeks back. He had a great start to the week on Thursday Night Football. He went on to record seven catches on eight targets for 111 receiving yards.

His first game back in week 10 was against a stout Denver Broncos defense that is no friend to fantasy football receivers. Burks looked excellent on TNF versus the Packers and feels like a safer option in an offense that isn’t afraid to get creative and scheme up touches for their studs.

He is the most athletic receiver on the roster and should finish this season strong, especially in week 14 against the aforementioned Jacksonville Jaguars secondary. Burks is well worth the addition if available, don’t be afraid to overspend on him.

Juwan Johnson has been the savior to all my Tight End injuries. Whether it was Mark Andrews, Zach Ertz, or Dallas Goedert, I’ve subbed Johnson in multiple lineups to replace key TE losses. We all know how volatile the Tight End position can be, but Johnson is providing consistent production.

However, given the scoring consistency, he’s too valuable to leave dangling on the waiver wire. Dealing with Fantasy Football Tight Ends brings people together better than the holidays; we’re all dealing with the same problem! Johnson could be a temporary answer for us down the stretch of the regular season and playoffs alike. He’s rostered in just 30% of fantasy football leagues; surely you can get him on one of your rosters.

Juwan Johnson with his 5th TD in the last 5 games 🙌#LARvsNO | 📺: FOX pic.twitter.com/FGF95CemaE

Nico Collins has been a low-key fantasy option for the past two weeks. He missed weeks eight and nine with injury, but he’s looked good since returning in week 10. Collins has 17 targets in the last two weeks while collecting ten catches for 97 total yards. He also scored a touchdown in week 10. He’s not offering gold bar production, but it’s pretty fair, given the status of the Texans’ offense.

He should be on the table for you if you’re in need of a receiver in week 12. The Texans face the Dolphins, who allow the 13th most fantasy points to wide receivers. The Dolphins will likely run up the score and create a positive game flow for Collins and the company.

Expect similar production in week 12, with a higher upside to score a touchdown. He’s rostered in just 27% of fantasy football leagues, don’t leave him hanging.

Like Nico Collins, Tannehill has also looked good the past two weeks after returning from injury. Tannehill has four passing touchdowns and just one interception through his last two starts. In week 11, he recorded 333 passing yards on 22 completions, while in week 10, he totaled 255 yards on 19 completions.

The Titans have thrown the ball quite a bit through the past two weeks; Tannehill recorded a total of 63 pass attempts from weeks 10 and 11, the team’s highest two-game total all season. Tannehill is rostered in just 16% of fantasy leagues; he’s worth a grab if you’re dealing with QB issues. It seems like the Titans want to get the ball moving more vertically.

This certainly isn’t a sexy pick. However, the Broncos running back committee lost one of its members in Chase Edmonds this week. Edmonds was carted off the field in week 11, and his status for week 12 is not looking good thus far.

I trust very few members of the Broncos’ offense, so it’s hard for me to suggest spending any significant FAAB or waiver priority on him, but it would appear it’s just Murray and Melvin Gordon for the time being.

Murray scored a touchdown this week and earned 49 rushing yards on 17 attempts. It’s not efficient, and it’s not pretty, but it is production; buy him if you’re desperate for a running back; maybe you’re like me and just lost another key player like Joe Mixon. Murray is rostered in just 23% of leagues, should be easy to add if needed.