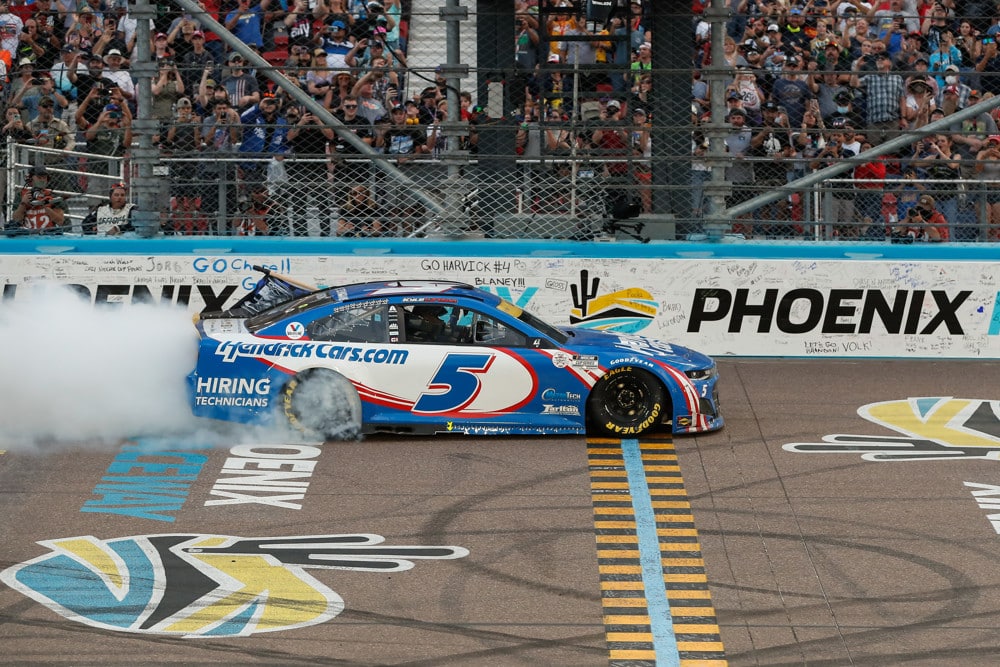 Get ready to set your NASCAR DFS lineups as NASCAR crowns a Champion at Phoenix Raceway. This one mile, low-banked tri-oval asphalt track has been hosting the Championship weekend since 2020. Phoenix Raceway has hosted over 50 races since it’s first race in 1988, where Alan Kuwicki went to victory lane. Current driver Kevin Harvick leads in all-time wins at Phoenix Raceway with his astounding nine checkered flags. Harvick also holds the records for most top fives, top 10s, and laps led making him an instant favorite.

This week’s NASCAR DFS slate provides some difficult decisions for owners. Which Championship favorites do you pay up for? Can a driver not vying for the Championship perform the best? Will a driver surprise us all and get to victory lane?

The first driver you should think about paying up for is Chase Elliott. Not only is Elliott vying for his 2nd championship, but he’s got some pretty incredible stats at Phoenix as well. In 13 starts, Chase has one win, five top fives and eight top 10s. The driver of the #9 Chevrolet has an average finish of 10.7 at Phoenix Raceway, which is the 3rd best average amongst current drivers. He knows how to race up front at Phoenix as he has led close to 550 laps in his career there. Earlier in 2022 at Phoenix Raceway, Elliott finished 11th but led 50 laps just missing out on a top ten. This could be the weekend for Chase Elliott to score his 2nd Championship and therefore, you should think about paying up for him in your NASCAR DFS lineups.

No surprise that Kyle Larson is another driver you should think about paying up for in your DFS lineups. The driver of the #5 Chevrolet has 16 starts with one win, six top fives, and nine top tens. Larson’s average finish of 12.4 is 5th best amongst the active drivers in the Cup Series. Just like Elliott, Larson knows how to get around there and has led almost 200 laps in those 16 starts. Earlier this season, Larson experience one of his many engine failures leading to an uncharacteristic 34th place finish. Young Money also has some added incentive as he could win his owner Rick Hendrick another Owner’s Championship this weekend. Kyle Larson is definitely a driver you should pay up for in your DFS lineups at Phoenix.

After a disappointing week in Martinsville, Denny Hamlin is still a driver to pay up for at Phoenix. At the track in the desert, Hamlin has 34 starts, two wins, 16 top fives, and 20 top tens. He has the 2nd best average finishing position at Phoenix of 10.6. The driver of the #11 Toyota has led nearly 900 laps at Phoenix Raceway making him a threat to be up front in any race there. Earlier in 2022, Hamlin regressed a little with his 13th place finish at Phoenix. I don’t think that was a very good indication of what could happen this weekend. Denny Hamlin is a driver you should pay up for in your NASCAR DFS lineups.

Denny Hamlin WINS his way to the #Championship4!

This winning moment at Phoenix is presented by @ToyotaRacing! pic.twitter.com/zKJwYvIFVz

Kevin Harvick at Phoenix is a no-brainer and definitely a driver to consider playing in DFS. Phoenix has been the personal playground for the driver of the #4 Ford. In 29 starts, Harvick has nine wins, 28 top fives, and 28 top tens. That’s a top ten percentage of almost 72%. “The Closer’” has an average finish of 8.7 at Phoenix is the best average finish at that track of any current Cup Series driver. With all of those wins, comes a lot of laps led for Harvick. 1663 laps in the lead in fact! In the 2022 Phoenix race, Harvick finished in 6th place but was really a factor in the top five all day long. Kevin Harvick should get strong consideration when making your NASCAR DFS lineups for Phoenix.

Harvick’s teammate Chase Briscoe is also a driver to consider for this weekend at Phoenix. Briscoe only has three starts at Phoenix in the Cup Series but that includes a win earlier this season. The driver of the #14 Ford led 101 laps on his way to his only victory in 2022 and first career win in the Cup Series. Chase Briscoe doesn’t have a lot of experience at Phoenix, but he should still be a driver to consider this weekend.

A driver to stay away from in Phoenix is Michael McDowell. The driver of the #34 Ford has never scored a top ten in his 23 starts at Phoenix Raceway. In fact, McDowell has never finished better than 16th. McDowell’s average finish at this track of 30.8 is the 2nd worst amongst active Cup Series drivers. Earlier this season at Phoenix, McDowell finished 27th. Michael McDowell has had best season of his career, but you should still stay away from him this weekend.