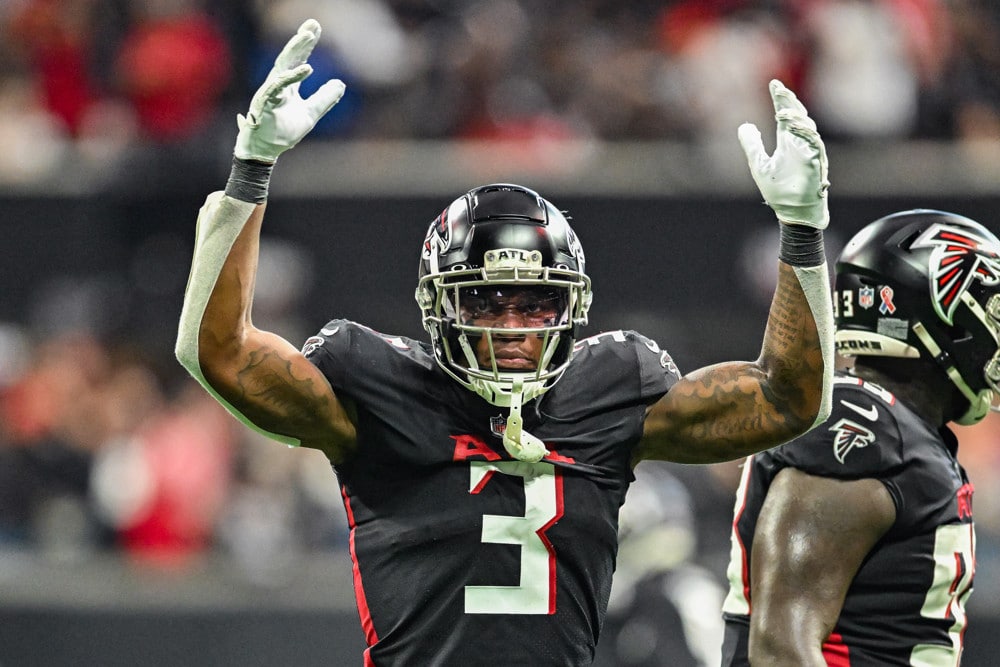 Welcome back, and thank you for joining us again for the NFL’s week 6 IDP fantasy football footnotes. And, of course, we’re right to it with our risers, fallers, pros, and regular Joe’s footnotes. Covering NFL locker room reports and any scenario changing in between. Or just passing on some of the in-house rumors and reports by the local beat writers. Whatever it is. If it’s NFL defensive player related, and could change the game somehow. It’s always going to be worth talking about IDP fantasy football footnotes.

It’s a two-way split. One was inside linebacker Deion Jone’s IDP managers. And the same also goes for Atlanta Falcons ILB Mykal Walker and Rashaan Evans managers too. At least we think. Walker, of course, is now questionable with a groin injury. And it looks like the rookie Troy Anderson might be the next man up for a while. A groin injury can require a decent amount of time to fully heal. Either way, this took Walker and Evans out of the haze a little of whether or not Deion Jones was going to enter the mix coming off the I.R.

Deion Jones managers have also been sitting on the edge wondering. Having Jones sitting idle on the injured reserves with a shoulder issue off and on. And wondering out loud at this point. Did I waste my time with former or not, ILB stud Deion Jones this season? But now there is light at the end of the tunnel for those managers in both cases. And now moving on. Maybe the “Loser” in this week’s Week 6 IDP Fantasy Football Footnotes can clear up Jone’s outlook in Cleveland.

Unfortunately in a lot of cases, there will be an IDP loser or two in any in-season NFL trade made. And with Deion Jones now a Brown. It’s pointing right at middle linebacker Anthoney Walker’s replacement Jacob Phillips. And that makes the managers of his the real losers in the end. And in our defense of thinking this. Phillips hasn’t exactly been good in the middle linebacker position in the real NFL. So despite padding our box scores after Walker went down, he’s likely heading back to a part-time role soon.

Are the Cleveland Brown troubles all on Phillips? Hell no, and far from it. But since taking over, the Browns as a unit has allowed a ton of rushing yards. In the two games after losing Walker, the Browns have allowed 415 in total. And that’s not going to cut it if the game film and reports are right. It does look like Jacob Phillips is the culprit. And we’re not the only ones that see it because PFF has Phillips poorly graded at the moment. And when we say poor, last we looked, he was sitting on a pretty poor 30 grade, which is pretty dismal.

The Old Dog Has Chops

Did you miss NFL veteran, and stud IDP Jason Pierre-Paul signed with the Ravens right before week 4? Hitting the ground in the first game versus the Bills hard too. He had an ironman type snap count off the top. And sprinkled a handful of tackles in for good measure. So not only was Pierre-Paul ready right off the street. J.P.P. rolled right in there again this past weekend versus the Bengals.

How did he fair in this really favorable matchup against the Bengals? How about one of each, a solo, an assist, a tackle for loss, with a sack, and added two passes defended? Well maybe not everyone got our message on the SGPN IDPro Players Podcast last week. But it worked for those that did. And might have taken the lite risk he’d not get in the backfield as we suggested. Which was based onJ.P.P.’s WK4, and the Bengals O-Line struggling. Oh, and of course, his NFL career as a whole was thrown in there.

Added bonus, the Ravens have always been a top team in recent years to blitz a ton. Sending everything but the ball boy at times and way way more than most teams ever would. And now, J.P.P. is clearly their primary pass rusher. And seeing him come right in ready to play as he has. And like he hadn’t even been a free agent at all. All of us IDP managers can thank the Ravens for adding another top option to our player pool. And right before those tough fantasy football footnote bye-weeks come into play.

The New Guy Is Looking Legit

The Jaguar’s selection of defensive end Travon Walker was a legit first-overall pick. With that said, and a change in my original offseason tone. This guy is not easily impressed with many rookies. Even if they produce for IDP at first. Especially when the majority of them are more productive by default than not. So I can confirm. I now think a lot of us fantasy football defensive writers had this 2021 first-overall selection by Jacksonville all wrong. Walker isn’t as long of a project coming into the NFL raw as we thought he’d be via those rookie reports. How so? Walker has already shown he’s capable thus far despite the uneven IDP box score.

Recap, Walker flashed big in week one versus the Commanders. Recording huge numbers no one could have expected and soon forgot about. Walker followed up this opening-day performance with a couple of back-to-back lackluster weeks. Only then following those up with solid games leveling him as a strong DL2 play with upside at the moment.

Here’s the thing. The Commanders, his first opponent. They are currently sitting atop the very top of the pile of NFL teams allowing production off the edge. Hence, Walker primed his season up nicely and overachieved in a matchup he should have. And enter week 2 versus the Colts who are also sitting high on that edge production pile. No on paper is his actual outlier because he wasn’t able to match what was there as other Jaguars did.

How Legit Can Walker Be?

But those last three contests, versus the Chargers, the Eagles, and now against the Texans. This “development prospect”? He has been well on par with each game versus the fantasy football matchups. That’s huge, and rare early on (See Aidan Hutchinson) in a defensive ends career in the modern NFL. Especially when we consider his raw rookie profile by the NFL professionals.

So just imagine when Walker learns his technique he needed so-called time for it. Because Travon Walker is already accomplishing things that first-rounders still haven’t mastered. And that’s consistency early on when it comes to the matchups. And why we finish off the week 6 IDP Fantasy Football Footnotes with Travon Walker. A future top-tier pass rusher in the under-construction.