College Football DFS Week 6: Targets and Fades at Every Position 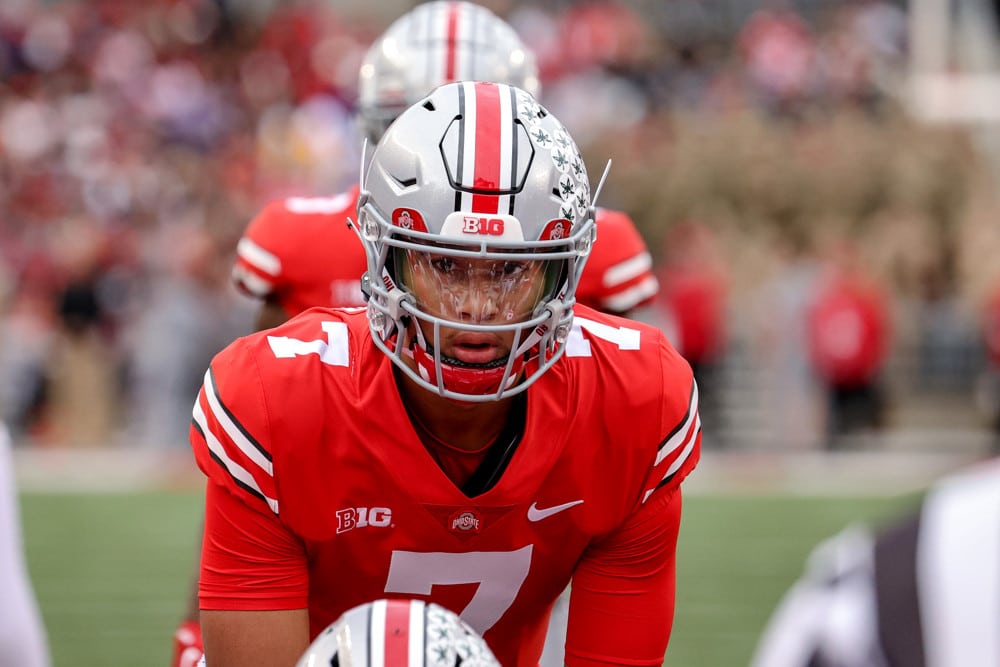 We’re back for Week 6 College Football DFS. The season is barreling ahead at breakneck speed so get in while you can. Here are my targets and fades for each position for the main slate this weekend. Remember to tune into our podcasts where we’ll cover every slate over at The College Football Experience.

CJ Stroud – Ohio State ($9.2K) I’m going to go out on a limb (sarcasm) and project a big day for Stroud. MSU is again one of the worst teams in the country at defending the pass (115th) and the Buckeye QB should be in store for a bounce-back game after a quiet outing vs Rutgers. Last year, Stroud threw for 393 yards and 6 TDs in the 1H alone vs Sparty.

Will Rogers – Miss State ($7.7K) Rogers still hasn’t had a monster game this year like he was putting up a season ago. Perhaps getting Arkansas’s swiss cheese pass defense at home is just what the doctor ordered. Expect a big game in Stark Vegas from the Bulldog QB.

Max Duggan – TCU ($7.2K) You can’t deny the 50+ point fantasy performance Duggan just had vs Oklahoma. You never want to chase last week’s points, but it certainly feels like the TCU QB is getting awfully comfortable with the new offense. Kansas is on deck for the Horned Frogs in a game with a high O/U of 68.5 points.

Max Duggan COULD NOT be stopped on his way to 5️⃣TD and the W against Oklahoma 😤 pic.twitter.com/xj315w4Deq

Anthony Richardson – Florida ($6.8K) it’s boom or bust for AR15 this year. There’s been 40+ point fantasy performances vs Tennessee and Utah and there’s been less than 10 point outings vs USF and Kentucky. If you can stomach the wild swings in production, it may pay dividends vs a Mizzou D that I’m certainly not scared of.

Quinn Ewers – Texas ($6.5K) Obviously, we’ll have to monitor the situation at Texas to ensure Ewers gets the start vs Oklahoma. Before getting hurt, he looked impressive vs Bama and the Sooners just allowed 668 yards of offense to TCU after giving up over 500 to K State. I can get behind that is Ewers is given the green light.

JJ McCarthy – Michigan ($6.4K) McCarthy hasn’t broken 20 fantasy points in three straight games but he has a juicy matchup against Indiana and their 107th-best D in America. I’d expect the most productive game of his young career is on the horizon and the price is dirt cheap.

Stetson Bennett – Georgia ($8.4K) Bennett started the year off hot but has come down to earth in the last couple of games. Less than 20 fantasy points vs Kentucky and Mizzou isn’t going to cut it for the 4th highest-priced QB on the slate.

Bijan Robinson – Texas ($9K) The best RB in College Football finds himself on my list again. See above for all things Oklahoma D (or lack thereof) related.

Quinshon Judkins – Ole Miss (6.4K) His price may be creeping up but it’s because he’s basically taken control of the Rebel backfield which happens to have one of the best running games in the country. Watch him go wild vs Vanderbilt on Saturday.

Raheim Sanders – Arkansas ($6.2K) I had Rocket Sanders on my fade list last weekend vs Bama but the Razorback RB was still able to crack 100 yards and get a TD. Playing Miss State this weekend isn’t a plus matchup but this is a volume play, especially if KJ Jefferson is out.

Devin Neal – Kansas ($5.4K) I’ve been somewhat critical of Neal this year but now with fellow Jayhawk RB Daniel Hishaw out with an injury, the backfield is his. We could be seeing a 20+ touch game which offers a ton of value at only $5.4K

Donovan Edwards – Michigan ($4.6K) Edwards was eased back into action last week but should be primed for a bigger workload vs IU. I expect Michigan to roll here which may mean resting Blake Corum ($7.9K) some. If that happens, Edwards will be the primary beneficiary and could post big numbers.

LSU RB Josh Williams earned 7 first downs & 39 yards after contact from his 68 tough yards vs Auburn.
He Made Our Top 5 Tiger Performers vs Auburn.
WHO ELSE WILL MAKE THE LIST?
Find out Later Today!
👀Our Auburn Reaction 👇 https://t.co/wXCOCETK1I pic.twitter.com/A2Mcz4MJjt

Zach Evans – Ole Miss ($7.2K) I’m a Zach Evans guy but you can’t deny he’s losing carries to the true freshman, Judkins. At this point, he shouldn’t be the higher-priced RB between the two which means he’s basically not roster-able.

Marvin Harrison Jr – Ohio State ($7.4K) You have to get pieces of this Buckeye passing attack vs Michigan State’s awful pass D. Stacking Harrison Jr with CJ Stroud just makes too much sense. I’d also entertain a double stack with Emeka Egbuka ($6.7K) or Julian Fleming ($5K) if you can swing it.

Charlie Jones – Purdue ($7K) he’s not as cheap as last week but I expect the Purdue passing game to get back to their usual ways vs Maryland. QB Aidan O’Connell should now be fully healthy and if so, Jones is a steal at this price.

Xavier Worthy – Texas ($6.3K) While consistency has been an issue for Worthy over the last two years, no one can deny his talent. It’s a great matchup vs Oklahoma on Saturday regardless of who the Longhorn QB will be. In the Red River Shootout last year, all Worthy did was catch 9 balls for 261 yards and 2 TDs.

Bru McCoy – Tennessee ($5.7K) With Cedric Tillman sidelined with an injury, the former 5-star caught 5 balls for over 100 yards and a TD vs the Gators. I see no reason why a similar game isn’t possible for McCoy this week. The Vols are going to get theirs through the air and McCoy will be a big part of that.

Dalton Kincaid – Utah ($4.4K) We gotta fit a TE into this column and Kincaid fits the bill. He’s been a solid contributor for Utah the last couple of years and now star TE Brant Kuthie is out for the year. That means more targets coming towards Kincaid and I love the price.

Jake Bobo – UCLA ($6.5K) The WR pricing is all out of whack on DK this weekend so I could list any number of high-priced players here. However, after a monster 6-143-2 performance last weekend, Bobo seems like he’ll get plenty of attention at only $6.5K. He’s a fine wideout but this Utah D will be a huge step up from Washington last weekend. Don’t expect a similar performance.