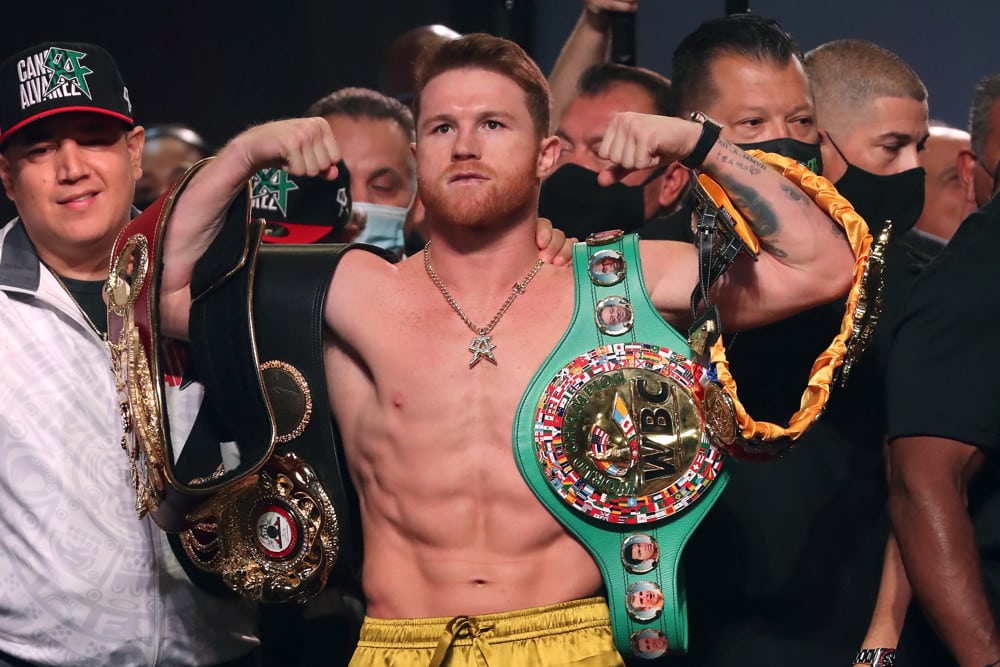 Saturday night, DAZN will showcase the long-awaited trilogy fight between Saul “Canelo” Alvarez and Gennady “GGG” Golovkin. The 12-round match for the Undisputed Super Middleweight Championship will take place in Las Vegas, Nevada. Boxing odds on Canelo vs GGG 3, with picks and bets from the Sports Gambling Podcast Network, are coming up, DING DING!

When you look at the betting odds for this fight you may be swept off your feet. Gennady “GGG” Golovkin is a +400 underdog. The price reflects that Golovkin is now a 40-year-old moving up in weight class for the first time in his career to face Canelo in his prime. GGG won’t change his in-your-face fight style which aggravates Canelo. I expect GGG to come out and look great in the early rounds, as he has scored a first-round knockdown in two of his last three fights.

👀 WHEN CANELO AND GGG THROW DOWN, YOU DON'T JUST SEE THE PUNCHES, YOU HEAR THEM! 👂

In the first fight, Saul “Canelo” Alvarez bulked up and attempted to bully GGG around in the ring. It resulted in Canelo getting gassed in the fight and escaping with a draw due to judge Adalaide Byrd notoriously being blind and scoring the fight 118-110. For reference, the other two judges scored the fight 114-114, and 113-115 favoring GGG. In the rematch, we saw the cobra-like, snappy Canelo that everyone knows and loves with his quick counterpunches in combination. This is the version of Canelo I expect to see Saturday night.

In order for GGG to win this fight, he needs to start fast and hurt Canelo early. Naturally, after moving up a weight class to fight Dmitry Bivol, Alvarez was heavier and wasn’t used to that extra weight. Bivol stunned Canelo early and he wasn’t the same throughout the fight. However, I think Alvarez wins this fight. GGG himself has lost a step with old age. There’s a reason why Alvarez wanted to wait so long for a third fight. Also, just like Canelo wasn’t used to his heavier frame against Bivol, if Alvarez digs down into the GGG body with his powerful left hooks, Golovkin will tire out and become a punching bag. The -550 moneyline for a Canelo win is juiced out – I favor GGG tiring out and Alvarez scoring the KO/TKO as my favorite bet in this fight.

throwback to that time the ref jumped in & saved ggg from going down… also when one of those patented Canelo left hooks lands to that body ✌🏽😬 pic.twitter.com/uSeHXhbmjZ