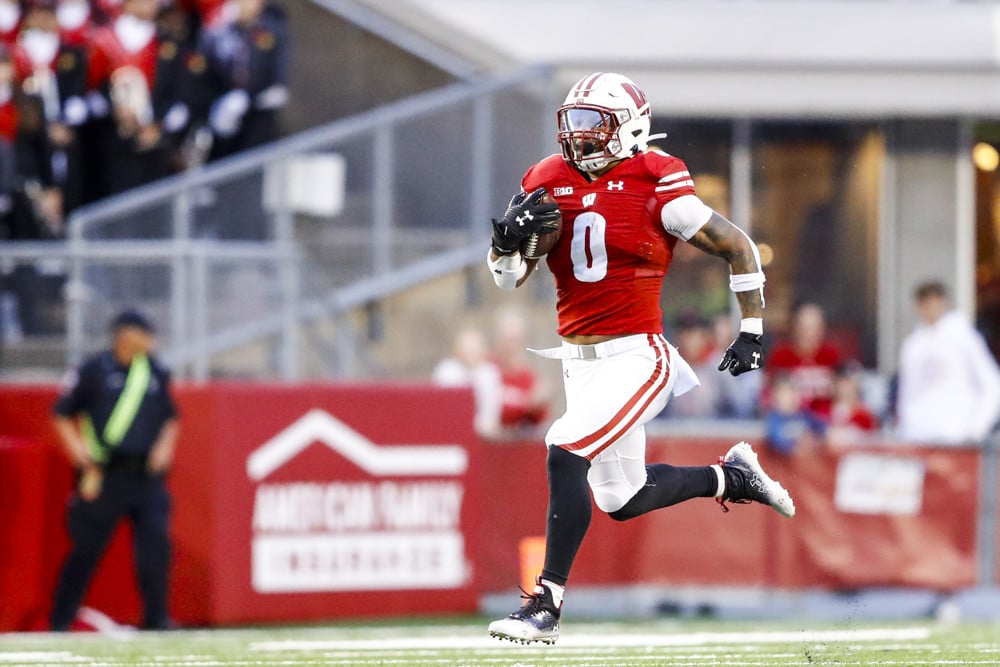 MADISON, WI – SEPTEMBER 03: Wisconsin running back Braelon Allen (0) runs away from the defense on his way to a touchdown during a college football game between the University of Wisconsin Badgers and the Illinois State University Redbirds on September 3, 2022 at Camp Randall Stadium in Madison, WI. (Photo by Lawrence Iles/Icon Sportswire)

College Football DFS we are back. Apologies for not getting a column out for Week Zero or Week One but better late than never, right? You can always tune into our CFB DFS podcasts as well over at The College Football Experience.

We’ll change up the format a bit this year and offer a couple targets at each price range for each position as well as some players to fade. Remember, this is for the Saturday main slate only. Check out our podcasts for our lineups on the other slates. Let’s do this!!!

Bryce Young – Alabama ($10.2K) There’s a good chance the reigning Heisman winner gets to the point where he’s a must-roster regardless of his price. Five first half TDs vs Utah St last week is an indication of how dominant Young can be this season. Set it and forget it.

Hendon Hooker – Tennessee ($7.8K) It might not be the best matchup in the world but Hooker is a dual-threat fantasy rockstar every time he steps onto the field. In the blowout vs Ball State last week, the Vol QB threw for 2 TDs and ran for 2 more before taking a good chunk of the 2H off.

Tyler Van Dyke – Miami ($6.4K) Towards the end of last year, Van Dyke was being priced over $8K which makes a $6.4K price tag quite the bargain. In fact, its a tie for the lowest he’s ever been priced (vs NC St in 2021) and in that game he put up north of 32 fantasy points.

Brennan Armstrong – UVA ($6.3K) Speaking of under-priced, Brennan Armstrong cost us DFS’ers $10K or more twice last season. The cheapest we found the gunslinger at in 2021 was $8.4K and now he’s below $6.5K? He gets the Illini this week and in the same matchup last year, Armstrong threw for over 400 yards and 5 TDs.

Mike Wright – Vanderbilt ($5.4K) It may be vs cupcakes but in the first two games, the Vandy QB has thrown for six TDs and ran for four more. Those numbers speak for themselves plus Wake Forest hasn’t been a strong defensive team of late. Wright is my sneaky boom/bust play of the weekend.

Haynes King – Texas A&M ($8.7K) The matchup is right but the price point isn’t. I get the fact that UNC’s offense just went bonkers on App St but A&M doesn’t play the same brand of football. HK should never be priced this high.

Deuce Vaughn – Kansas St ($7.6K) He may be small in stature but that hasn’t stopped Vaughn from rushing for over 100 yards in seven straight games. Mizzou’s run D was awful a year ago and while the improved towards the end of the season, I still like Kansas State to run wild.

Braelon Allen – Wisconsin ($7K) Allen is a complete animal and this is a juicy matchup at a very attractive price point. Need I say more?

Frank Gore Jr – So Miss ($6.2K) Gore ran for 178 yards and two TDs last week while also logging some snaps at QB. With the Golden Eagles QB status in doubt this weekend vs Miami, Gore might see more time at QB (like he did last year). Either way, this kid is a lot like his pops and will be looking to show out vs his dad’s alma mater.

Audric Estime – Notre Dame ($3.8K) After getting bottled up by Ohio State, the Fighting Irish are about to run wild on Marshall. Estime splits carries with Chris Tyree but got two more touches and the TD vs the Buckeyes.

Bijan Robinson – Texas ($7.3K) Robinson may be the best RB in all college football and you are getting him at a discounted price because they are playing Bama BUT they are playing Alabama. Go elsewhere this week.

Ainias Smith – Texas A&M (7.2K) We just saw what UNC did to the App State secondary and while I’m not the biggest Haynes King guy, Ainias Smith is set to produce regardless of who the QB is. 6-146-2 was his stat line last week and we could see similar fantasy #’s again.

Just another day at the office for Ainias Smith! @AggieFootball pic.twitter.com/TUuM2cpFSJ

AT Perry – Wake Forest ($6.9K) With Sam Hartman back in action for the Deacs, expect his favorite target AT Perry to go off. His quiet opening week might make people forget he racked up almost 1,300 yards and 15 TDs last year.

Nathaniel Dell – Houston ($6K) Score two TDs in Week 1 and your price drops $1.8K? Okay DK – whatever you say. I’m buying as many shares of Dell as I can.

Billy Kemp – Virginia (4.2K) Kemp is UVA’s possession receiver and perfect cheap stack with Brennan Armstrong. It was a quiet week 1 but there’s a reason why Kemp reeled in 74 catches last year. In a tighter game, expect Armstrong to look Kemp’s way often.

Trey Knox – Arkansas ($4.1K) While 6 catches for 75 yards and 2 TDs isn’t going to happen every week, that’s what Knox did last Saturday vs a good Cincy D. That’s enough for me to take a bite at only $4.1K this week too.

Konata Mumpfield – Pitt ($7.5) Catching 5 balls for 70+ yards was a solid first game for the Akron transfer but I’m not sure that warrants being the second-highest WR on the slate. Over-priced!