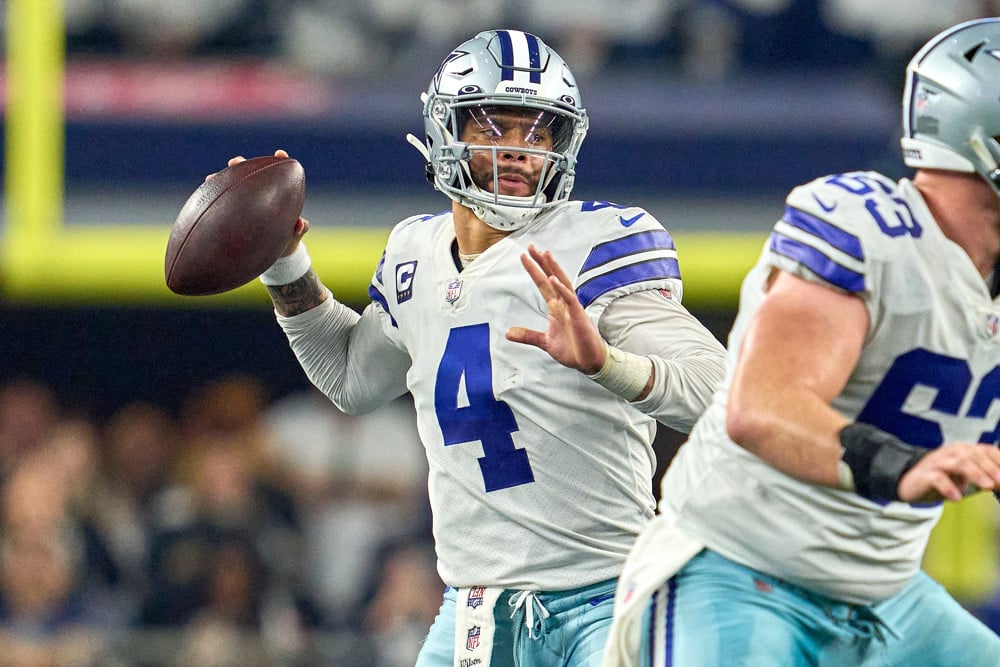 With that being said, let’s highlight two favorites and two dark horses worthy of laying some money down on early.

The consensus betting favorite going into the season also just so happens to be my favorite as well. The 2020 runner-up is coming off another excellent season in 2021. His 5,170 total yards was a career-best, and his 42 touchdowns were second only to his 45 in the 2020 season. His 5304 intended air yards were the best of his career as well by nearly 500 yards.

This led to Allen ending 2021 with a league-best approximate value (19). With Gabriel Davis showing out in the playoffs and the addition of Jamison Crowder and Roger Saffold, Allen figures to be in line for arguably the best season of his career. Lock in that +700 with confidence.

First of all, at +1600, this is one of those bets that seem too good to be true. While guys like Brady and Mahomes are ahead of him when it comes to the vegas odds, Prescott is in a highly advantageous situation. Leading the way for “America’s Team” will have all eyes on Prescott and the Cowboys in 2022, and any building off his 2021 success makes him a sure-fire end-of-the-year MVP candidate.

He has backed off on his running of the ball (only 48 carries) while also increasing his touchdown numbers on the passing end. His 37 was a career-best and good for fourth in the league.

Losing Amari Cooper hurts, but Michael Gallup has shown he’s more than capable of being a trusted target. Drafting Tyler Smith, on the other hand, should prove to be a major win. Especially with the rookie offensive lineman showing he’s got that dog in him already in training camp. The Cowboys have the 10th easiest strength of schedule, and I fully expect Prescott to feast on opposing defenses. At this point, +1600 looks like a steal.

Look, I know I don’t need to tell you that Jonathan Taylor is good. Everyone knows that by now. But what I do need to tell you is that the Colts bell cow is facing the (projected) third easiest schedule in all of football. In 2021, Taylor racked up a league-best 2171 total yards and 20 touchdowns. That led to him finishing second to Cooper Kupp in the offensive player of the year voting.

While MVP does tend to be a very quarterback-driven award, the numbers that Taylor will be in line for will have him as a front runner for the 2022 NFL MVP award all season long. Especially with the massive upgrade at QB with newly acquired Matt Ryan at the helm. Frank Reich has already said he plans to get Jonathan Taylor more involved in the passing game, and with Ryan targeting his backs 145 times in 2021, the sky is the limit for Taylor in 2022.

Heading into the 2022 season, Hurts is looking to make the “third-year leap” we all hope to see from young QBs. Hurts is no exception. Coming off a season in which he only threw for 16 touchdowns, Hurts is going to need to see some major improvement in the passing game if he stands a chance at winning MVP.

To be honest, it doesn’t actually seem that farfetched. Hurts saw a 9.3% jump in completion percentage from year one to year two, despite having one of the worst receiving corps in the league.

Now, with DeVonta Smith heading into year two as well as newly acquired pro bowl receiver AJ Brown, Hurts has all the weapons a QB needs to be truly successful. Especially when you take into account Hurt’s rushing ability, both his 784 rushing yards and 10 TDs led all QBs. With the second easiest strength of schedule going into this season, if Hurts can take that one more step forward…winning the 2022 NFL MVP is a very real possibility.