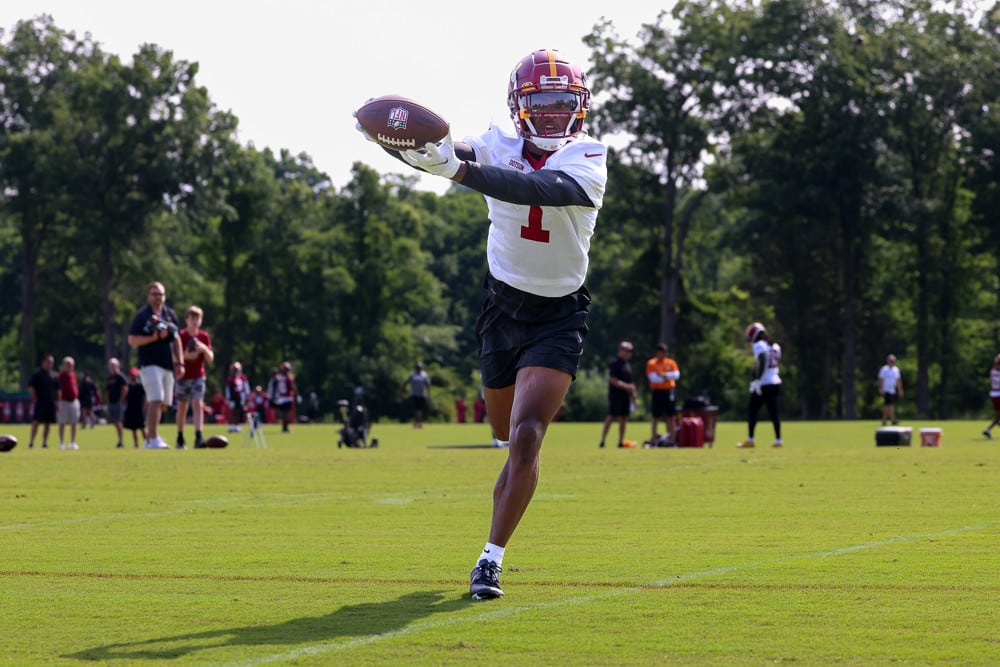 Maximizing the value of your draft picks is extremely important when constructing your team. This is the same in your rookie draft. Drafting players lower than their average draft position (ADP) and trading back are ways that you can maximize the value of those picks.

To identify values, I compared the Expert Consensus Rankings (ECR) on FantasyPros that also have my rankings, and compared them with Sleeper’s Dynasty Rookie ADP (.5 PPR). Let’s see who the experts like more than the public.

The experts were five spots higher on Giants Rookie WR Wan’Dale Robinson. Robinson has excellent draft capital and landed on a spot where he could easily be one of the top WRs immediately. Sterling Shepard is coming off of an Achilles injury, Darius Slayton is on the last year of his rookie deal, and Kenny Golladay struggled to live up to expectations of his big contract.

Robinson is the ideal fit to replace Shepard in the slot. His combine numbers did not blow people away, but his college production was awe-inspiring. He has a 39.3% dominator rating which puts him in the 99th percentile. Robinson went from the big 10 to the SEC and earned a 2nd team All-SEC in his only season there, putting up 104 catches, 1,334 yards receiving, and 7 TDs.

Jahan Dotson was the 16th overall pick in this year’s NFL Draft. However, he is barely going in the top 16 of your rookie drafts. Dotson is another smaller WR at 5’11” 182 lbs out of Penn State, where he received 1st team All-Big Ten honors in 2021. Dotson broke onto the scene in 2020 with a three-touchdown game vs. rival Michigan, but Jahan saved the best for last.

Jahan Dotson’s stat rankings amongst the 22 first round WRs:

Yet his ADP is the lowest of the bunch… this seems like the value pick we should all be targeting IMO#FantasyFootball pic.twitter.com/MB3myVNwm9

In his season for Penn State, he had 91 catches, 1,182 yards, and 13 TDs in just 12 games. Dotson goes to Washington, who does not have a clear #2 WR option. Curtis Samuel missed almost all last season with an injury, and Logan Thomas may not be ready to go as he is recovering from an ACL tear. Nevertheless, Dotson is a sneaky play in redrafts and is an excellent value in your dynasty leagues.

Jalen Tolbert is being drafted five spots lower than the experts rank him, and he is someone that continues to rise up rankings. News that Michael Gallup could miss the start of the season and potentially 6-8 weeks create a potentially massive opportunity for Tolbert in a great offense.

There are rumors that Dallas could potentially be looking at a veteran free like Will Fuller or Cole Beasley, but until they are on the roster, it appears Tolbert is in line to be a starter week 1. This is a good player that is extremely athletic; he could be a sneaky play in Best Ball or redraft this year. He is currently one of the best values in rookie drafts.

The experts were four spots higher on Colts Rookie WR Alec Pierce. A lot of people had not heard much about Alec Pierce before being selected in the 2nd round. Pierce didn’t put up gaudy numbers in college or at the NFL combine on top of coming from the University of Cincinnati.

With the 53rd pick in the 2022 NFL Draft, the Indianapolis Colts select:

Nevertheless, Pierce caught 52 balls for 884 yards with eight touchdowns in 2021. As a result, Pierce got one of the prime landing spots when he got drafted by the Colts, who have yet to add another pass-catching option this offseason. As it stands, it appears that Pierce could be a day one starter and potentially the #2 WR for new signal caller Matt Ryan.

There is a theme here; wide receivers get pushed back in ADP as people go after running backs. David Bell was drafted four spots lower than the experts have him. Bell did himself no favors at the combine with a 4.65 40 at the NFL Combine. His numbers improved during his Pro Day, but the damage was already done, and he dropped to the end of the 3rd round.

✅ Early declare & Breakout Age
✅ Proven production
✅ Attached to an elite QB
✅ WR87 in Redraft. WR57 in Dynasty. Won’t be this cheap for long.pic.twitter.com/BDYHlDf7ev

Bell is a great route runner and is an excellent possession WR drawing comparisons to Jarvis Landry and Anquan Boldin during the draft process. Unfortunately, Bell landed in an odd position as he could end up as the starting slot or even the #2 option on the team right off of the bat. But, the Deshaun Watson suspension is looming and could make things difficult for Bell in year one.

Players the Experts are lower on than ADP.

This is the biggest gap on the entire board. Allgeier is coming in a whopping eight spots higher than the consensus rankings. This is a big swing as some perceive an excellent opportunity for him in that backfield. His competition is two 30+year-old running backs in, Damien Williams and Cordarelle Patterson. Allgeier is a bigger back who does fit Arthur Smith’s offense well.

Allgeier put up extremely impressive numbers last season with 5.9 yards per attempt and 1611 rushing yards that resulted in a whopping 23 rushing touchdowns in 2021. He also caught 28 of his 32 targets for 199 yards. PFF had him ranked as the 3rd best RB in this draft class. But dropping to the 5th round really brings some question marks for him. The landing spot isn’t ideal as he could be 2nd or 3rd on the depth chart to start the season.

Davis-Price is being drafted as the 21st rookie off of the board. The experts have him outside of the first two rounds (27th overall). He is being drafted right ahead of Tolbert and right after Alec Pierce who were two of the top values. Pierce was a surprise day two pick for a lot of people. He was not on many people’s boards coming into the draft, but any time that Kyle Shanahan drafts an RB, you have to monitor the situation.

What if Tyrion Davis-Price is the RB you want to roster in San Francisco for Fantasy Football?
pic.twitter.com/ov0eajZvRc

We know that Trey Sermon was a failed experiment and that Davis-Price likely is already ahead of him on the depth chart. News that Shanahan wants to move towards a committee is not shocking as he usually cycles through backs. However, if Davis-Price can get that 2nd spot on the depth chart. Then he could be very interesting in one of the best rushing offenses in the league.

Trey McBride comes in 4 spots higher in ADP than the experts have him ranked. Part of this is position scarcity; he was the clear-cut #1 tight end in this class. Instead, Mcbride got a good, but not great landing spot with Arizona. The long-term outlook is fantastic, but the short-term looks a bit frustrating, and managers will have to be patient as he develops behind Zach Ertz.