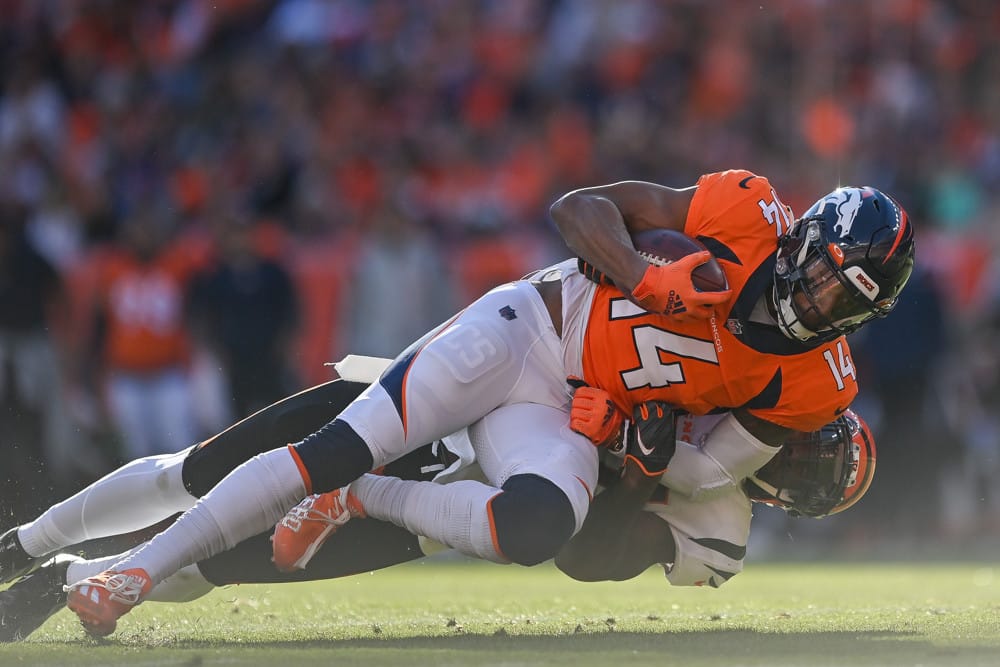 Everyone knows that the Wide Receiver pool is deep. That allows you to wait in your drafts for that WR2 because you know there will be breakout candidates later. Before you draft though know your scoring settings because whether it is PPR, half PPR, or standard league it will make a difference here. In this article, I will provide an in-depth analysis on how Wide Receiver targets will be spread out in some of the more volatile situations in the league.

We know that volume should be one of the main criteria when drafting Wide Receivers.  Last season, for example, only Deebo Samuel and Ja’Marr Chase finished as a top-5 fantasy Wide Receiver with less than 159 targets.  Samuel had 120 targets, but his multi-dimensional usage (six receiving touchdowns and eight rushing touchdowns) vaulted him to WR3 on the year. Furthermore, Chase had 128 targets and 13 receiving touchdowns while finishing as the WR5.

Only two receivers landed in the top 20 with fewer than 120 targets.  Mike Evans finished the season as WR9 while scoring 14 times on 113 targets.  Tyler Lockett was WR16 with 107 targets and eight touchdowns as well.

So you can hope that your Wide Receiver is going to be utilized like Samuel or that he is a red zone beast.  However, the best approach is to go with the player that is getting the targets.

In today’s NFL, the position of Wide Receiver is somewhat fluid.  What was once prototypically a slot receiver only now has morphed into a slot/Z receiver.  Additionally, the big X receiver has been known to play the slot or Z positions.  Don’t get me started on Tight Ends either.  So, whether a receiver like Denver Broncos’ Jerry Jeudy plays the slot, or is lined up on the outside matters.

The asterisk denotes a change of team from 2021.

The above chart ranges from most targets to least targets.  The raw number of targets is also why Kupp at WR1 had 191 targets while Renfrow, who finished the season as WR10, had only had 128 targets.  In regard to fantasy football, sometimes it is more than just the raw numbers.

To begin, the difference in fantasy points between the WR1, the wide receiver with the most targets, and the WR20 is significant.  Targets, average targets per game, and target share are important factors in fantasy football.

Last season, there were five teams in the NFL that did not have a receiver who received 100 targets.

However luckily for us, some of these teams have reliable Wide Receivers who can bounce back with a new Quarterback under center or a new head coach with a different game plan.

The issue with the Browns is who will be under center?  If Deshaun Watson is playing in 2022, it will be after a suspension.  As a result, there is little chance that any of the Browns’ Wide Receivers reach that plateau this season.  Peoples-Jones had 78 total targets in total in his two NFL seasons, leaving him limited without Watson. Cooper on the other hand has had only one season where he didn’t have over 100 targets, and that was his third season in the league. In that season he had 96 targets with 680 yards. David Bell is a third-round pick from the 2022 NFL Draft too who should factor in.

Wilson is under center now for the Broncos now, and that means nothing but fantasy goodness. The problem for fantasy managers though is choosing which players will be on the receiving end of all that goodness?

To begin, each of these players last season was forced to deal with a subpar Quarterback rotation.

Per Next Gen Stats

Wilson also has thrown 60 deep touchdown passes since 2016.  His two receivers in Seattle, DK Metcalf and Tyler Lockett, rank second and third in deep touchdown receptions since 2019.  In Denver this season though, it is not if it is who.

Thomas did not play last season, and Olave is just a rookie.  Furthermore, Landry is coming from the Cleveland Browns where he played in just 12 games last season. He was on the receiving end of 85 targets and 52 receptions with a 24.7% target share in that limited time.  His average depth of target was just 5.2 though.

The presumptive starting Quarterback will be Jameis Winston.

The Giants will be playing under a new head coach in Brian Daboll.  Unfortunately, lead Wide Receiver Kenny Golladay had a disappointing season with the Giants last year as well. He had one game (week four v New Orleans Saints) with over 100 receiving yards (116) and had no more than 65 receiving yards for the rest of the season. Toney wasn’t any better, seeing double-digit targets only twice.

Additionally, he had over 100 receiving yards only once (189 yards in week five versus Dallas) and then did not have more than 78 receiving yards for the rest of the year.  Shepard played sparingly in just seven games last season too.  He had 10 targets in week two versus Washington (10 targets), where he also had 94 yards, but that was about it.  Quarterback Daniel Jones did not help himself, but as you can see, his receiving corps did him no favor either.

Some 2021 WR Draft Darlings are currently available for deep discounts:

Targets are important, as is a Wide Receiver’s target share. Nonetheless, the receiver position is heavily dependent on the Quarterback position, game speed, and the team’s willingness to air out the ball (yes, this is directed at you Seattle).

The fluidity of the preseason demands we pay careful attention to training camp battles and preseason games.

Here at SGPN Fantasy, we got you.