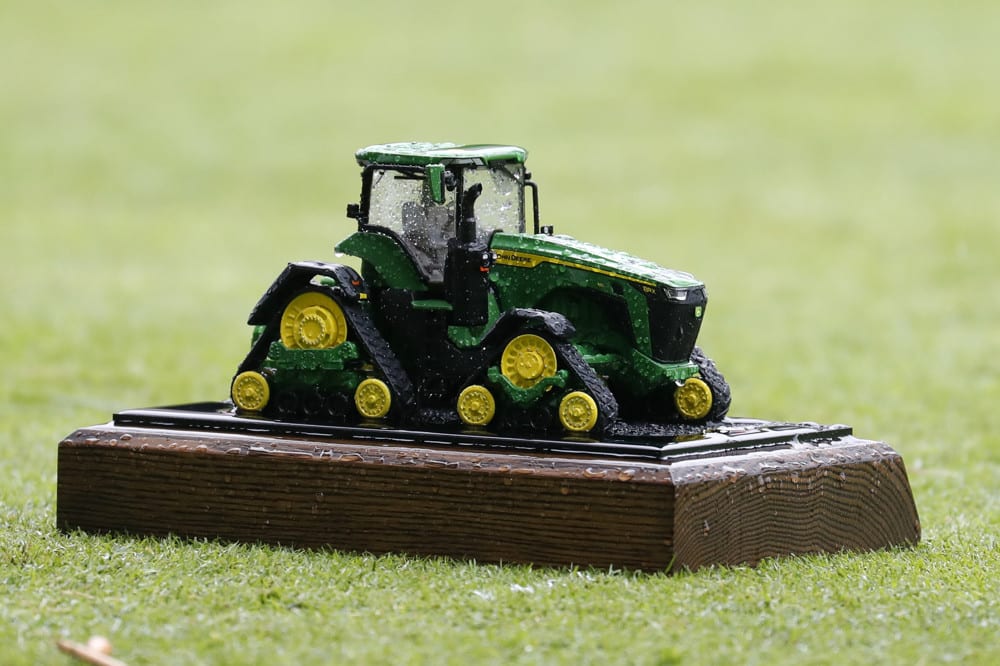 The summer of golf rolls on, and unfortunately it rolls on without a lot of star power. The PGA Tour heads to the Quad Cities for the 2022 John Deere Classic at TPC Deere Run. As always, here is your early deep-dive on the 2022 John Deere Classic and a preview for how to bet. In addition, listen below to the Golf Gambling Podcast for more information about golf betting.

The John Deere Classic started as the Quad Cities Classic in 1971. Originally a satellite event, it became an official PGA Tour tournament in 1972. The event bounced around various golf courses in the Quad Cities area until 2000, when it found a permanent home at TPC Deere Run.

TPC Deere Run is a part of the TPC network and was D.A. Wiebring Golf Services, with association from the PGA Tour Design Services. In a nutshell, this is a golf course essentially built by the PGA Tour. The golf course runs at 7,258 yards. It has Bentgrass greens and fairways, and four inch Kentucky Blue Grass rough:

If you’re an avid reader of my column, you probably am sensing a bit of apathy towards this tournament. You’re correct. TPC Deere Run is…fine. There’s nothing remarkable about TPC Deere Run. The (few) viewers that watch the John Deere certainly won’t be riveted by the canvas that the golfers are painting on.

It’s not all bad though. Of all the TPC courses, this one is decent. There’s some really good land movement. There’s good variety hole to hole, particularly with the routing. And it’s in immaculate shape. Plus, the citizens of the Quad Cities LOVE the John Deere. Even when droves of top players avoid this tournament like the plague, the enthusiastic fans show up in force.

And that’s the shame of it all. The fans of the John Deere deserve better than this. Not a field without a single Top 50 player in the world. Not one where they’ll have to watch the likes of Omar Uresti, Tommy Gainey and Parker Maclachlin waste everyone’s time across Thursday and Friday. But hey, at least they get another crack at earning five figures playing golf again.

There’s a huge rant about the PGA Tour that I had been writing up, but I’ll spare you the gory details. I’ll just leave everyone with this – it is absolutely embarrassing that the PGA Tour, for weeks, have tried to differentiate themselves from LIV Golf by shouting from the rooftops that they put out the most competitive, premium golf product in the world. And this week is the best they can do. A field without a single Top 50 player in the world with absolutely NOTHING on the sports calendar that can compete with it. A tournament where whichever schmuck wins it will earn almost as many FedEx Cup points as one would if they won the Memorial. Apples to apples, right?

And all this on a week where a rival golf league that is slowly but surely chopping out the legs out from under the PGA Tour makes its grand United States debut as well. No matter what side of the LIV vs. PGA Tour debate you’re on, this week makes one thing painfully clear – weeks like this only means that we, the fans, lose.

It might be a fools errand to try and legitimately handicap this event. There are very few golfers in this field that anyone can remotely trust. For these guys, recent performance absolutely does not ensure a future outcome. Sure, I can tell you things like pick guys with good current form, or great ball strikers. But there are maybe only 10 players in the field that fit this criteria. For betting and DFS this week, you’ll have to close your eyes and hope for the best.

With that said, let’s try and at least guide you in the right direction. Here’s a relative skillset chart for what historically works at TPC Deere Run (per DataGolf). This might be a preview of what the final leaderboard of the 2022 John Deere Classic will look like: 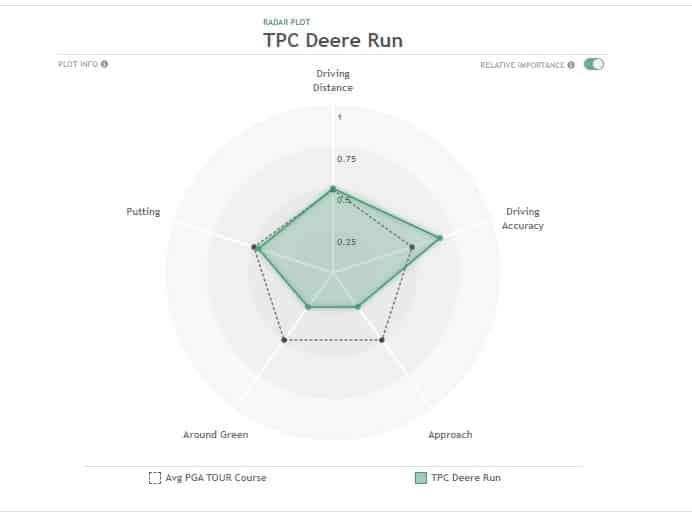 It’s important to take this chart with a little bit of context. Even though this week’s field is comically bad, historically the fields at the John Deere hasn’t been all that strong. And the vast majority of average to below average players try and keep their card by doing two things. #1 – avoiding trouble off the tee. And #2 – hitting a bunch of putts. That’s the best way for these players to not only save strokes, but to save their PGA Tour cards.

But there is some legitimate golf reasons why this profile of player tends to do well at TPC Deere Run. For starters, this golf course yields a ton of birdies. Per DataGolf, it is the 11th easiest golf course on the schedule. And considering several ones that were easier are one-offs, this is annually one of the easiest scoring tournaments of the year. As such, in order to make a lot of birdies, you have to be able to hit some putts.

Second, there is some legitimate penalty to missing a fairway. Why is that? First, the fairways are relatively soft and easy to hit. On average, the fairways at TPC Deere Run are about 40 yards wide. So when the field average of fairways hit is high, the penalty for missing them at a higher rate is higher too. But there also is some thick Bluegrass rough off of it too. That makes it pretty difficult to get out of, especially for those who lack pop. As such, those who have good control over their tee shots are at an advantage. And for those who have some pop AND control off the tee, it’s a great combination at TPC Deere Run.

Next, here’s where players will hit their approach shots from (per DataGolf):

There’s a lot of short approach shots on the PGA Tour. While there’s a slightly above average rate on shots 200-250, the biggest test of the weeks is who can hit approach shots from under 150 yards the best at TPC Deere Run. Again, this type of distribution chart allows average to below average players to put up great scores. Any professional golfer tends to hit their short irons supremely well. The gap between them and the elites isn’t as big as it is with a longer approach shot. As such, target both proximity and scoring performance on shorter approach shots.

Lastly, I usually would post the guys who have the best course history at TPC Deere Run in this space, but that list isn’t going to be very helpful. For the most part, the best players in this week’s field probably don’t have a start to their name at the course. And for those who do, they’re mostly has-beens. As such, only use course history as part of a larger justification for taking a player. Instead, focus more on some of the attributes I listed above, along with current form. That should serve as a better preview of how the 2022 John Deere Classic will shake out.