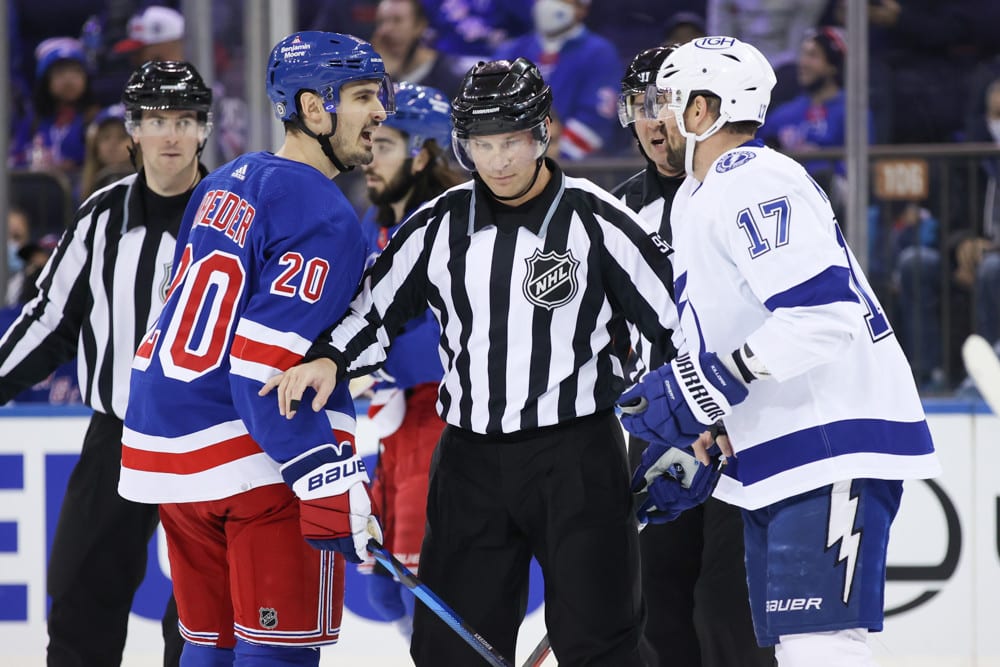 The 2022 NHL Stanley Cup Playoffs are down to the final four! The Colorado Avalanche and Edmonton Oilers kicked off the Western Conference Final on Tuesday night in a thrilling game. Now, our attention turns to a much lower-scoring series between the New York Rangers and Tampa Bay Lightning. Igor Shesterkin is a Vezina Trophy finalist and Andrei Vasilevskiy has won two straight Stanley Cups. Let’s get right into our NHL playoffs Eastern Conference Final schedule, odds, picks, and predictions for Rangers vs. Lightning!

It’s been an uphill battle throughout the playoffs for the Rangers. They lost a triple-overtime thriller at home in Game 1 against the Penguins. Although the Blueshirts battled back to win Game 2, they lost Games 3 and 4 in Pittsburgh by a combined score of 14-6. Igor Shesterkin was pulled in both games and it looked like New York’s season was over. However, they came back in Games 5, 6, and 7 to take down the Penguins in overtime.

Then, the Rangers dropped Games 1 and 2 in Carolina against the Hurricanes before winning four of five games to take the second-round series in six games. They outscored the Canes 11-4 in the final two games as well.

Shesterkin is going to win the Vezina Trophy as the league’s best goalie and is a finalist for the Hart Trophy. He’s a big reason that the Rangers have come this far, and if they advance to the Stanley Cup Final it will be because of him. Mika Zibanejad, Chris Kreider, and Adam Fox have also stepped up in these playoffs.

Tampa Bay won the last two Stanley Cups but still wasn’t overwhelming favorites –– or favorites at all –– in either of its first two series. The Lightning took down the Maple Leafs in seven games then swept the up-and-coming Panthers in the second round. They’ve now had quite some time off before the Eastern Conference Final.

Even with that, Tampa Bay knows how to win and will do whatever it takes to advance. Vasilevskiy is a huge reason for that as well.

The Lightning keep defying the odds and are finally pretty decent favorites to win a series. However, I don’t know if they should be that big of favorites.

The Rangers seemed destined to make some noise this season with Shesterkin in net. This is bound to be a goalie battle in this series and the Rangers are one of the few teams that may be able to take down the reigning two-time champs.

New York swept the season series and I think there is value on the Rangers in this series.