Who Is The Fastest Player In the NHL Right now? 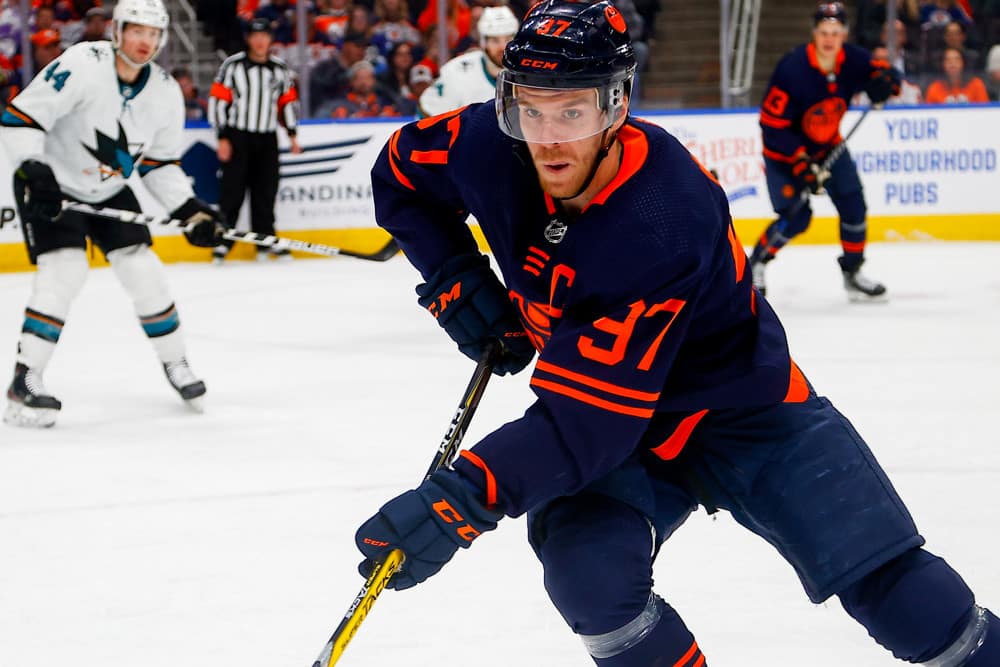 Speed over the ice is one of the key attributes in top class ice hockey, but which player can lay claim to being the fastest player in the NHL in 2022?

To get an idea of who it is, we can take a look at the results of the 2022 NHL All-Star Skills event that was held in the T-Mobile Arena.

Jordan Kyrou plays for the St Louis Blues, having joined them in the 2016 NHL entry draft.  He signed a new two-year contract worth $5.6 million in 2021, and 2022 saw Jordan take part in the All-Star game for the first time.

He also won the Verizon Fastest Skater award this year, but he wasn’t sure that he deserved the right to be called the fastest skater in the league. Kyrou completed the race in 13.550 seconds, and admitted that he was nervous before it started due to the presence of all of the big-name players he was competing against.

The Canadian player said that the next player on our list definitely should be called the fastest hockey player in the world, but is he right?

Connor McDavid is the captain of the Edmonton Oilers and has been playing in the NHL since he was the number one pick in the 2015 draft. He is classed as one of the best players in the sport right now, and his incredible speed over the ice is one of his key assets.

In this year’s Fastest Skater contest, he raced last and was fractionally behind Kyrou, with a time of 13.690, which saw him finish in fourth place. This was a major surprise since he had previously won this award on three occasions in the past, with the last time in 2019.

When asked about it, McDavid said that anyone could have won it and that he always thinks that he has a chance of winning this sort of competition.

Let’s hope Connor can help the Oilers to rise slightly in the odds, as they are currently not among the favorites to win the Stanley Cup 2022. You can check out the current odds here: https://www.bovada.lv/sports/hockey/nhl

Dylan Larkin Is the Record-Holder

The captain of the Detroit Red Wings has been in the NHL since 2014. He was having arguably the best season of his career before injury put an end to it. However, Dylan said that he understands the end goal of winning the Stanley Cup and wants to stay to be a part of it.

He has to be included on the list of the fastest skaters, because he set the record in 2016, when he won the event with a sensational time of 13.172. This beat the previous record of 13.386 that had been set by Mike Gartner in 1996. This year, Larkin finished seventh out of eight players, with a time of 14.116.

Swedish-born Adrian Kempe joined the Los Angeles Kings in the first round of the 2014 draft and remains with this team in current times. The 2021-22 season saw him make the breakthrough as a key player, which saw him picked as the only Kings player for the All-Stars.

Kempe was second in this speed contest, with a time of 13.585 that put him just ahead of Chris Kreider of the New York Rangers, with 13.664. Having reached 30 goals for the first time in his career, the offseason could be crucial for Adrian, as his 3-year contract runs out and the Kings are sure to be keen to get him to sign up again.

Who Is the Fastest NHL Player of All Time?

The emphasis currently put on speed in their training regimes means that the current crop of NHL stars may very well be the fastest of all time. But there are still some names from the past that might have managed to keep up with them or even beat them.

This list of the fastest players in the history of the NHL includes the likes of the Russian Rocket Pavel Bure, Paul Coffey, and Yvan Cournoyer, who was known as Roadrunner among fans.

Peter Bondra is another contender, and he won the Fastest Skater contest on a couple of occasions, with his best time of 13.610 putting him in third place when compared to this year’s results. Before Bondra, Sergei Fedorov, was the first player to win this award twice.

We mentioned Mike Gartner earlier, and he was widely regarded as the fastest player in the NHL during this career, winning the speed contest twice and setting that record that stood for almost 20 years until it was finally beaten by Dylan Larkin a few years ago.