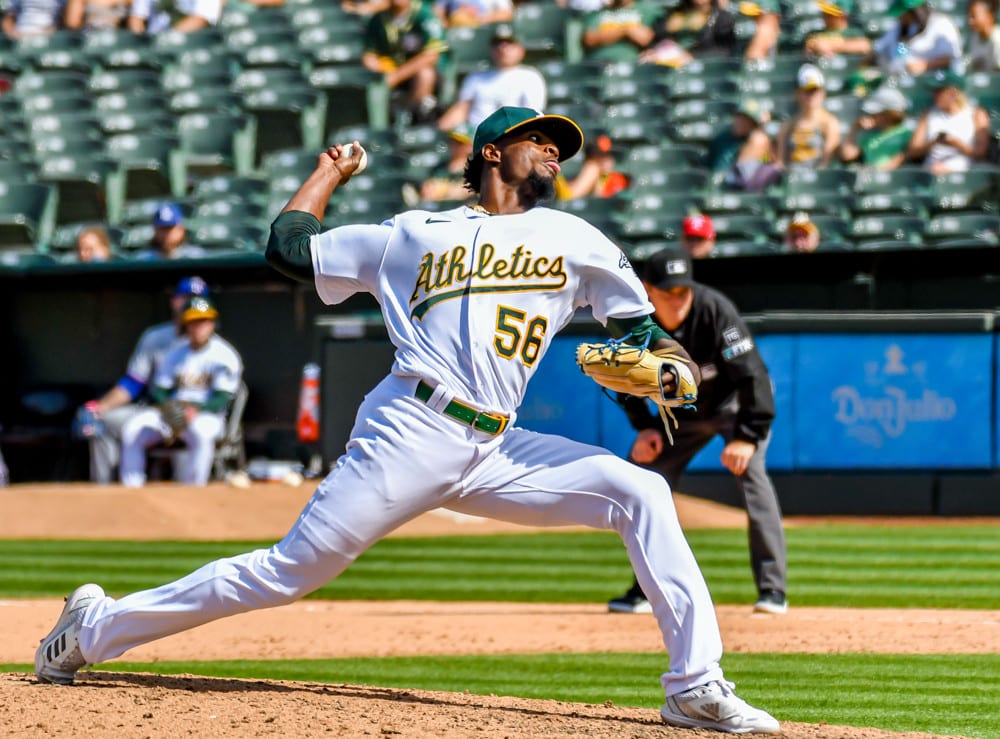 The Oakland Athletics aren’t going to have too many save situations this season, but Dany Jimenez is becoming the guy. Since our last Fantasy Baseball Closer Report on April 14th, Jimenez has been electric. He has five saves and one win in six appearances (6 IP) with seven strikeouts, one walk, and five hits allowed.

Jimenez has cemented himself as the Athletics’ closer with the experienced Lou Trivino on the IL. Trivino also hasn’t been great this season, allowing three runs (two earned) in 3.2 IP.

The 28-year-old has some closing experience in the minors. he picked up three saves for AAA Buffalo last season with a whopping 73 strikeouts in 44.2 IP, posting a 2.22 ERA and 1.21 WHIP. The A’s are hoping that those strikeout numbers can translate to the majors, where Jimenez has nine punchouts in seven innings this season.

Jimenez is available in more than half of leagues and should be rostered in many more. It would make sense for Oakland to ease Trivino back into things while the young gun has the hot hand.

Bender has only had four appearances in the last two weeks while dealing with hip soreness. He picked up the save in three of those four appearances, including back-to-back saves this week. However, Nolan Arenado hit a two-run home run off of him in the other appearance, giving him his second loss on the season.

It still appears to be a closer-by-committee approach in Miami, but Bender is the head of it. He’s worth the add if you need saves, but be wary of his ratios: 5.40 ERA, 1.20 WHIP. Those should come down a bit as he shows a larger sample size, though.

Bender is the primary option for now while the Marlins’ expected closer is injured. However, this next guy is rehabbing in the minors and could return as soon as next week.

Floro has yet to pitch this season due to a shoulder issue. He started his rehab assignment over the weekend, throwing 23 pitches at Low-A Jupiter. He is on track to return in early May, which is coming up fast.

The righthanded picked up 15 saves last season for the Marlins and was projected to close games again in 2022. Floro had solid numbers last season with a 2.81 ERA, 1.22 WHIP, and 62 strikeouts in 64 innings. He’s worth stashing on your IL for now, or just keep tabs on him and pick him up before another savvy manager in your league does.

Pagan was traded from San Diego to Minnesota earlier this month and it looked like he’d be in the mix for the Twins’ closer job. So far, that’s rung true as Pagan has Minnesota’s two saves so far this season.

It was thought that Jhoan Duran could close some for Minnesota, but the Twins appear to be using the youngster in higher-leverage situations earlier in the game. Pagan seems to be the experienced closer that they’re putting in that spot.

Stratton and David Bednar (78% Rostered) each have two saves for the Pirates this season in their committee. Pirates manager Derek Shelton said they’d split the duties and it’s held true thus far. Stratton has made seven appearances this season and allowed zero runs in six of them –– including zero hits in four of them.

Last season, Stratton had eight saves, a 3.63 ERA, and 1.30 WHIP with 86 Ks in 79.1 innings. He’s stepping into more higher-leverage situations early this season.

Over the past week, Stratton has racked up a hold and two saves while striking out three batters in 2.1 innings. He allowed two hits and one walk while closing the door twice against the Cubs. Stratton is worth an add in deeper leagues, or as a handcuff if you already have Bednar.