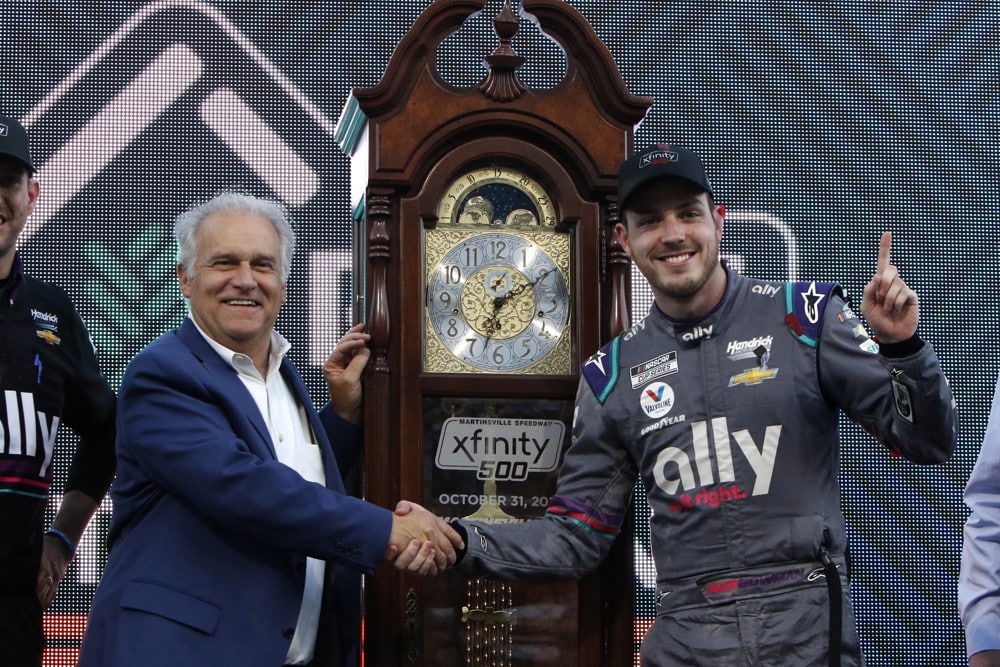 Seven for seven on winners to start the NASCAR season! The race at Richmond was a little less action packed then others we’ve had this season but came down to the end again and saw our first strategy call to win a race. Denny Hamlin thinks guys who back into wins at the end of the race are “Hacks.” Not sure if he thinks that applies to himself or not! But well deserved win for the #11 FedEx team. Now we turn our attention to track with the best trophy around in my opinion, a full size 7 foot tall grandfather clock to the winner of all 3 races this weekend!

Martinsville Speedway, know as the “paper clip” or the “half mile of mayhem” should contain plenty of mayhem this week, the race has been shortened from 500 laps to just 400, but 400 times around this very small paper clip shaped track Is no easy feat. If you look back at the history here, this is a place where the veteran drivers win, almost always. You don’t see many unexpected or newer winners at this track. It tests every part of these drivers and teams, and
this week we are going to lean on the guys who’ve been around here a few times to score our fantasy points.

A second grandfather clock is going home with @MartinTruex_Jr! pic.twitter.com/TQnaj1Ltye

Truex Jr. is the highest priced guy on the slate and the betting favorite (+550) for a reason. After struggling to get that first short track win, once he did, Martin hasn’t looked back. He’s dominated at the track that shares his namesakes MARTIN-sville of course so it all makes sense! Truex has won three of the last five with 11 top-10 finishes in the last 14 races at the track. Truex is 4th on the active driver list for laps lead here with 834 and could easily jump all the way to 2nd place on that list this weekend if he can pass Joey Logano (857) and Brad Keselowski (860) Kyle Busch tops the list (937) laps lead in his career. Can you ever have enough grandfather clocks? Truex is hoping to bring home his 4th this weekend.

Blaney is the youngest of the “veteran group” but he knows his way around this place. In the last six races nobody has a better average finish at Martinsville then Blaney at 5.83 (Truex Jr a close 2nd ). Trying to keep up with the former driver of the #12 cars “Rocket Man” nickname Blaney has scored three pole positions already this season. While he’s not been able to close out a race as the winner yet this season (listen to the NASCAR GAMBLING PODCAST to hear our take on his chances this week). He has proven he’s fast, and can run up front and lead laps, with 400 laps this weekend, those points will be needed!

RETWEET to congratulate @Aric_Almirola on his WIN at @NHMS!

The third win of his career puts him in the @NASCAR Playoffs! pic.twitter.com/nXa5Y64kdZ

Almirola is a crafty veteran with a knack for short-flat tracks. Unlikely we’ll see him dominate the race and win. But, he knows how to keep himself in these races. He’ll be in the mix enough at the end to score a solid finish. And that’s all we need at this price tag. He did pull off the win at short-flat New Hampshire last year so don’t put anything past this guy in his final full time season.

When in good equipment, Suarez has actually run pretty well at Martinsville. This year It’s safe to say his Trackhouse Racing team has been very good. Suarez snagged a top-10 here in 2018. He followed up with two more in 2019 before going to lower budget teams. Back in a more competitive car, Suarez could be the sneaky cheap guy to fill out our Blue-Emu Maximum Pain Relief 400 DraftKings lineups this week!