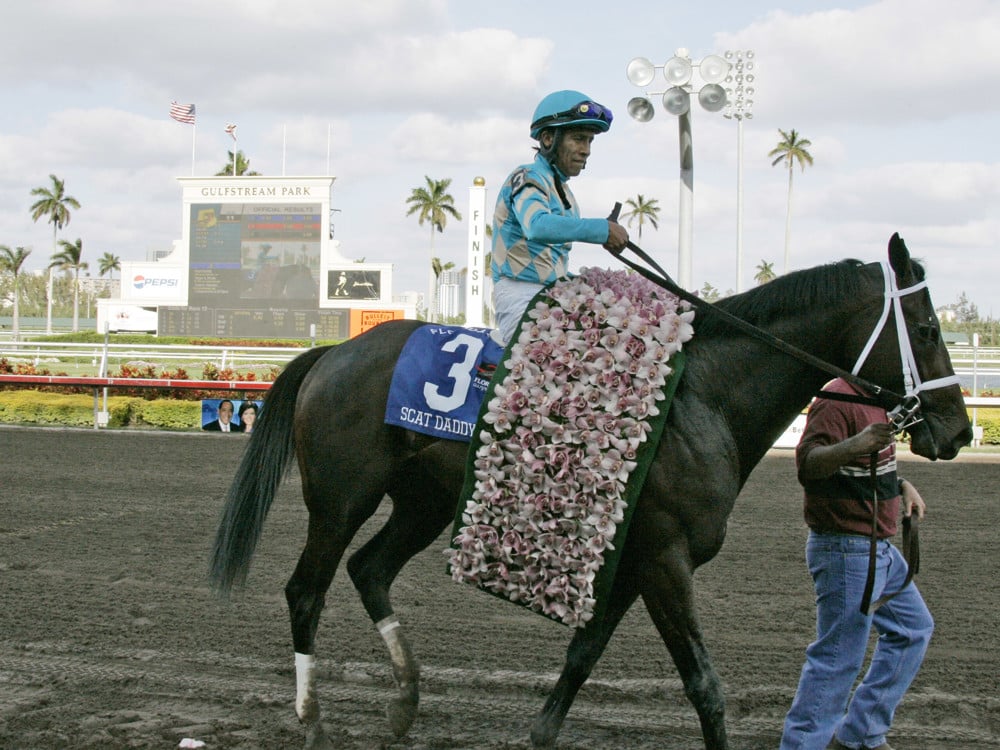 On Saturday, April 2nd, StableDuel is hosting a $40,000 contest for the races at Gulfstream Park, which includes the Grade I Kentucky Derby Prep Florida Derby. The day before, on Friday, April 1st, make sure to play the SGPN sponsored StableDuel Free Ride contest at Tampa Bay Downs. $300 in prizes will be distributed to the Top 20 finishers and the Top 3 will get an SGPN hoodie. If that wasn’t enough, the first two people to tweet out that they just joined StableDuel and who play the Friday SGPN contest will receive FREE entry into Saturday’s $40,000 Florida Derby contest. So, how do you get in on the action at StableDuel? Download the StableDuel app and then pick 10 horses with your $50,000 fantasy budget.

How to Play StableDuel: StableDuel is a fantasy horse racing contest where you create a stable of 10 horses from those running on a particular card. Each horse costs a fixed price based upon their morning line odds. You are given an allocation of $50,000 StableDuel dollars to purchase 10 horses. Favorites are worth more as horses with 2-1 odds cost $9,000 whereas horses with 10-1 odds only cost $1,000. Once racing starts you earn points based upon the performance of your horses: first (60 pts.), second (40 pts.), third (30 pts.), fourth (20 pts.), and fifth (10 pts.). Negative points are awarded to horses that finish fifth or worse.

Playing Gulfstream Park: With rainy weather in the forecast, it’s important to remember that the turf races at Gulfstream Park on Saturday could get moved to the all-weather synthetic surface (tapeta). Make sure to find horses who have shown versatility on both surfaces. If you’re playing Gulfstream for the first time, trainers Todd Pletcher (29%), Saffie Joseph Jr. (21%), and Shug McGaughey (19%) have been winning at a strong clip this meet. Among the jockeys, the Ortiz brothers, Jose (25%) and Irad Jr. (27%) lead the way in winning percentage, with Luis Saez (23%) winning the most races of the meet. The X-factor is Tyler Gaffalione (19%), who is one of the streakier top jockeys.

Horses to Build Your Entry Around: When building a successful StableDuel entry you should always identify three types of horses: safe favorites (3-1 or lower), consistent midshots (between 5-1 and 8-1), and live longshots (10-1 or greater). You don’t need to win every race in StableDuel, but you need to avoid losing points by selecting a horse that finishes fifth or worse. Below I’ll give you two of each to help get you started for a winning entry.

The filly attracting a lot of attention this weekend will be Secret Oath, who is running against the boys in the Kentucky Derby Prep Grade I Arkansas Derby. However, one of my favorite fillies from this three-year-old crop is Kathleen O. who has shown off a devastating turn of foot and late speed in her three career races, which have all been victories. Her biggest competition in this race will be Goddess of Fire who is coming off a significant layoff and has yet to win a race other than her maiden. Meanwhile, Kathleen O. already has one Grade II victory and a non-graded stakes win under her belt. She is stretching out and running two turns this time, but for a horse that pulls away late, it’s hard to imagine the extra distance will be an issue. Finally, she’s drawn the far outside post position, which will help keep her out of trouble coming out of the starting gate, which has been an issue for her in the past. She’s got the talent to overcome a wide trip and should prove to be among the favorites for the Kentucky Oaks.

The headlining race of the card will be a four-horse battle between Charge It, Classic Causeway, White Abarrio, and Simplification. In my opinion, it’s not a contest. The first three all want to get in the lead and have not shown the ability to win when coming from behind. Therefore, it’s reasonable to expect a fast pace up front for a group of horses stretching out to a new distance for the first time. The race sets up perfectly for Simplification, who overcame a poor start at the Grade III Holy Bull to finish second and followed that up with an easy victory last month at the Grade II Fountain of Youth Stakes. He’s evolved into a horse that can come from behind and the way he has finished races recently makes you believe he will relish the extra distance. He’s been working out beautifully and I think Saturday will be the day for him to put a claim as being a serious contender for the Kentucky Derby.

Sugar Fix is a consistent horse who has repeatedly shown the ability to win at this level. She’s hit the board in five of seven career races at Gulfstream Park and she’s won three times at this distance on the turf. Her last time out was the Grade III Honeyfox Stakes, which was probably more than she could handle, but she fought on for a game fourth-place finish. She’s back down racing against non-graded stakes company where she’s been winning, and she has great connections. Her jockey, Luis Saez, is the leading rider at the meet and when he’s teamed up with her trainer, Saffie Joseph Jr., they have won 29% of races. Finally, the race should set up nicely for Sugar Fix as there will be a few strong pacesetters and she can sit behind them before launching a late bid. This is a horse that likes to win (10 wins in 25 races) and is facing a field where she should have every chance to get it done.

Maiden races can be difficult to handicap when most of the runners have yet to run their first race, which is the case in the eighth race at Gulfstream Park. However, there are certain data points that can help you identify potential value, and Easy to Love checks those boxes. His trainer, Bill Mott, and jockey, Joel Rosario, are among the more trusted names in the sport, as Mott wins 17% of starts in maiden special weight races, which is an incredibly high percentage for races with young horses. Additionally, Easy to Love is owned and bred by Gainesway Stable. I often like seeing young horses that are owned and bred by the same organization as they tend to like to hang onto their best. Easy to Love has a strong pedigree (Empire Maker and an A.P. Indy dam) and has been working out well in South Florida. When you combine all of those factors with his outside post position, I think Easy to Love will be able to show his class in his debut performance.

Let’s start off the card with a value play. Running on the tapeta has driven handicappers and bettors crazy this season at Gulfstream Park, but it’s become obvious that some horses prefer that surface over dirt or grass. Benefactor is one of those horses, as he’s posted some of his best career efforts recently when running on the synthetic surface. In his three career races on the tapeta at Gulfstream Park, he’s finished in the top 3 twice with one victory. All those performances have come when he’s at double-digit odds, showing he’s a horse that regularly outruns his odds. He’s already beaten several other horses in this field on the synthetic surface and he’s gotten a nice rest since his last race on dirt. Expect him to perk back up on his preferred surface and notch you positive points in StableDuel at a low price.

Weyburn is coming back from a six-month layoff, which is typically a cause for concern. However, he’s also run against a better caliber of horses recently than anyone else in the Sir Shackleton Stakes field. The two favorites, Fortin Hill (5-2) and Collaborate (3-1) have never finished better than third in a stakes race. Meanwhile, Weyburn has run against the best horses in his crop and has a Grade II victory and non-graded stakes win to his name. He’s been running against Hot Rod Charlies, Essential Quality, Midnight Bourbon, and Mandaloun for the last year. The field of the Sir Shackleton will seem like a nice warm-up for his upcoming four-year-old campaign. He’s been working out well and his trainer, Brendan Walsh, has a good record with bringing horses back from long layoffs, as he’s won 21% of races where horses have had at least a 180-day layoff. This is one long shot that I expect to win on Saturday.

I hope these horses give you a good starting point for your stable entry and good luck!

Get all of Matthew’s horse racing coverage by following him on Twitter at @failedtomenace.