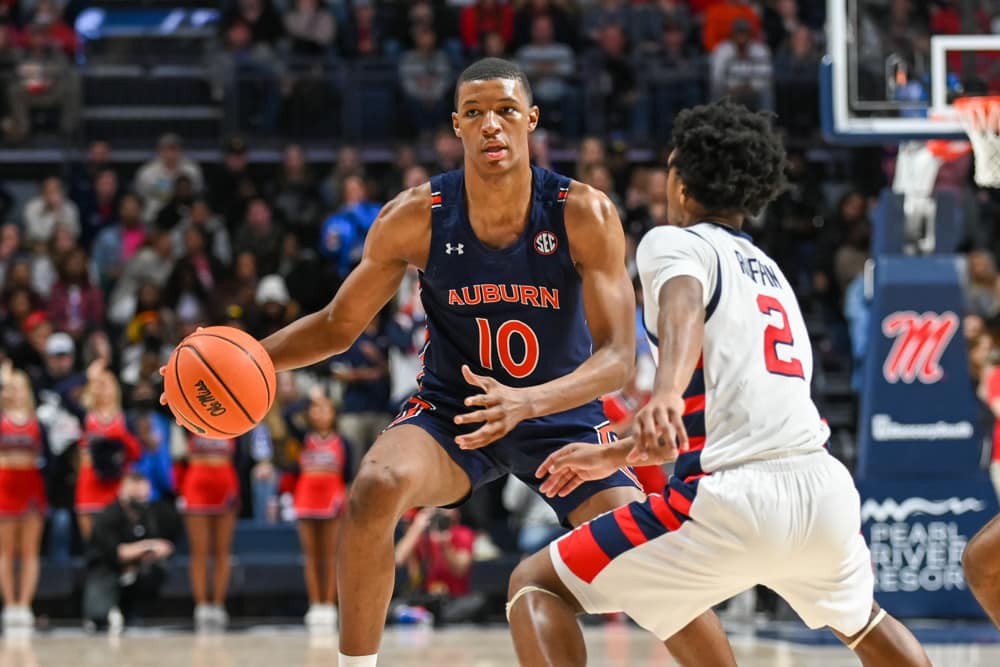 We’re now entering day four of binging out on college basketball’s March Madness. Don’t worry, after Sunday we have a break to catch our breath. That means we need to make the last day of Round 2 a success. Again, with just eight games per day, instead of 16, we have a more manageable slate. As usual, we’ll highlight each team’s offensive and defensive rankings and Team Total line for the upcoming games. Then, we’ll highlight some high-dollar, middle-of-the-road, and bargain bin options that stand out.

With a lot of the top guards having tough matchups vs excellent defenses, I’m going to dip down to Houston’s Kyler Edwards ($8K) as my big-dollar player at this position. First, he doesn’t have the household name that Johnny Davis ($8.8K) or Jaden Ivey ($8K) has so expect ownership to be low. Second, he’s been north of 35 fantasy points in three straight games and I’m not scared of the Illini defense. Edwards is a sneaky high-dollar play at the guard position that will differentiate you from the competition.

For my mid-priced guard, I will be looking at fading this poor Purdue defense. The Texas Longhorns have a couple of reasonably priced players that fit the bill. Andrew Jones ($6K) was red hot against the Hokies shooting 5 of 7 from three and putting up 34.3 fantasy points. Can he shoot that well a second game in a row? Then there’s Marcus Carr ($5.8K) who put up 34.8 fantasy points vs VT but is less reliant on the deep ball. I like both Longhorns but give me Carr at the cheaper price.

I mentioned this trio when previewing Friday’s games and nothing has changed since. For a cheap price, I like rostering pieces of this Arizona offense and while Dalen Terry ($6.3K) and Justin Kier ($5.3K) have gone up in price, Pelle Larrson ($4.8K) still sits under $5K. In the first-round game, Larrson put up his third consecutive 20+ point fantasy performance. I realize TCU will be looking to slow this game down but the Wildcat is still priced too low.

When rostering your big-dollar big man, I would look towards fading either Miami or Villanova as both lack top notch interior players. That would mean either Ohio State’s EJ Liddell ($9.2K) or Auburn’s Walker Kessler ($9K) or Jabari Smith ($8.7K). I trust Villanova to scheme up a defense to limit their opponents’ size over what Miami can do so I will roll the dice with an Auburn Tiger. For me, that’ll be Jabari Smith again. I fear Miami will go small which could slightly limit Kessler’s floor time. Smith should have another 40+ point fantasy performance.

Another lackluster defense you should fade is that of the Ohio State Buckeyes. They may have shut down Loyola Chicago but I doubt they’ll have the same success vs Villanova. Jermaine Samuels ($6.4) does it all for the Wildcats and I expect another similar performance to the 34.3 fantasy points he registered in Round 1. Plus, the price is right.

With a ton of attractive high-dollar guys on Sunday, you’ll probably need to gamble on a player less than $4K to make the budget work. If you find yourself in that position, I like taking a shot on Houston’s J’Wan Roberts ($3.8K). He’s put up double-digit fantasy points in five straight games and the Cougars will run a lot of guys at Kofi Cockburn. He should see solid minutes in this matchup which should result in a 4X or 5X game.