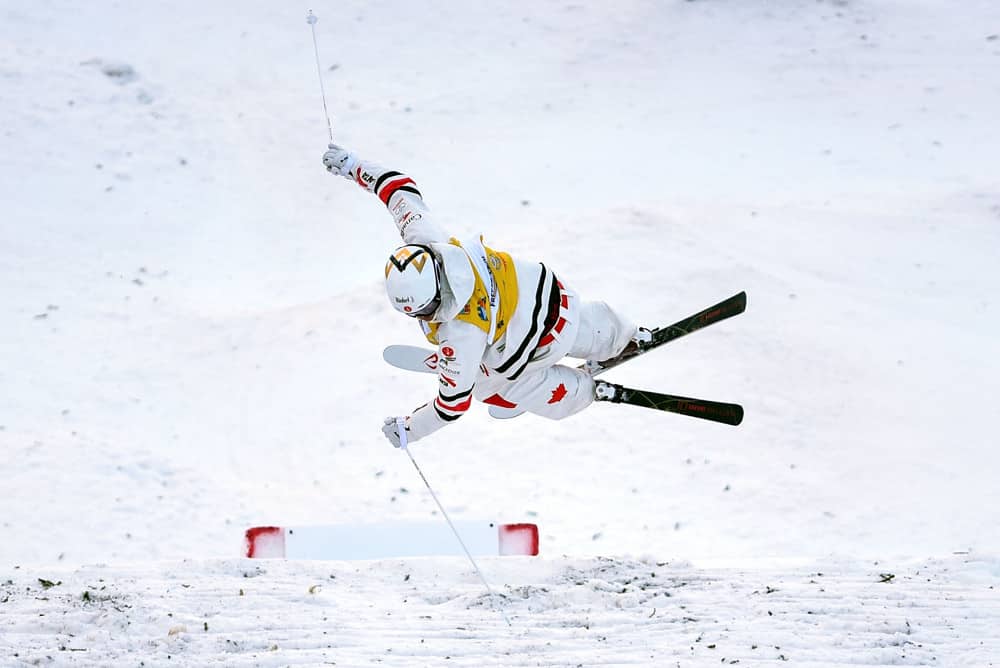 As you wake up early in the morning to watch the Olympics February 3rd you may be asking yourself one thing.  How will I attack Olympic betting?  If you’re new to watching the Winter Olympics or new to Olympic betting you may not know what the freestyle skiing moguls event is.  And if you don’t, you may not know how to start Olympic freestyle skiing betting.  Freestyle skiing didn’t appear in the Winter Olympics until 1988.  Since then, it has become a medal event and evolved into six different events in both men’s and women’s.  These events include aerials, halfpipe, moguls, ski cross, slopestyle, and big air.  We are going to jump into the Olympic moguls and look at some Olympic moguls bets.

What Are The Freestyle Skiing Moguls?

In the Winter Olympics, freestyle skiing moguls is an event where skiers take on a sloped course.  The course is covered in mounds of snow.  Just watching them fly over the rough mounds hurts my knees!  Skiers must perform two jumps and at least one trick.  A panel of judges watch them and judge based on turns, air, and speed.  60% of their score is judged on turns.  20% of their score is based on air.  And the final 20% is based on speed, as each run is timed.

Where to Watch Olympics:
USA and NBC (or Peacock).

Who:  The Olympic Moguls favorite is Mikael Kingsbury out of Canada.  Klingsbury is the most accomplished moguls skier of all time.  He excels at both moguls and overall freestyle skiing.  Born in Quebec, Klingsbury is 29 years old with 12 years of competitive experience since his world cup debut.  If you’re looking to get into Olympic Betting for the first time and place some Olympic Bets February 3rd, Klingsbury is a really solid choice and lands at the top of our Olympic moguls picks.

Who:  Ikuma Horishima currently has the second-best odds for the men’s Olympic moguls bets, however, his resume is much less decorated than Klingsbury.  Born in Ikeda, Japan, Horishima just turned 24 years old in December.  Despite not being as accomplished, Horishima had an amazing performance in Deer Valley in January to take victory and close points gaps on the World Cup leader Mikael Kingsbury.

Accomplishments:  While Horishima doesn’t have the amount of medals as Klingsbury, he does have 2 gold medals in the World Championships as well as a bronze.  He also has a gold and bronze medal in the Winter Universiade competitions.

Outlook:  Contender.  While he isn’t quite the favorite that Klingsbury is, Horishima is a very strong competitor who will look to place high.  And much like any sport, the Olympic moguls aren’t a sure thing.  There is always a chance of an upset and I think taking Horishima in Olympic freestyle skiing betting makes a lot of sense.  In fact, I’m going to place half a unit on him to be the outright winner for my Olympic moguls bets.

Ikuma Hiroshima was simply NOT messing around on Friday in Deer Valley, blazing this one down Champion Run to take the victory and close the points gap on World Cup leader Mikael Kingsbury #moguls pic.twitter.com/B7uDkN3t8G

Who:  Walter Wallberg is the youngest I’ve discussed so far.  At age 21, Wallberg was born in Bolinas, Sweden.  At +1500 he is the third favorite for outright winner in the Olympic moguls bets.  Wallberg started skiing when he was two.  He started competing in moguls in 2012, at the age of 12.  He also debuted in the World Cup at only 15 years old.

Accomplishments:  Wallberg was named the 2017 FIS Rookie of the Year.  He has three bronze medals and two silver medals in the world cup.  He did very well in the Europacup in 2015, finishing first overall.  In different events, he has four golds, one silver, and two bronze.  He has also won gold in Swedish National Championships.

Outlook:  Contender.  His odds are +1500, meaning he has some of the best value to start Olympic Bets February 3rd.  Wallberg doesn’t have the experience favorite Klingsbury does, but he is young and driven.  His goal is to be one of the best and to be the best you have to beat the best.  This seems like a longshot bet for him to be the outright winner, but I think he has excellent value which puts him in my Olympic moguls picks.  You can bet when I’m looking at Olympic betting, Wallberg is a name I’m considering.

Who:  Born in Park City, Utah, Nick Page is a very young skier to keep an eye on.  He is only 19 years old and while he has some inexperience, he looks to make his debut and get a medal.  Page found his love for competitive skiing and Olympic freestyle skiing watching the 2010 Olympics.

Outlook:  Dark Horse.  While his odds of being an outright winner aren’t great, he is a dark-horse candidate who could push his way into the conversation with a good run.  At only 19 he may be inexperienced, but he has a youthful energy and the drive to belong among the rest of the competition.  Nick Page falls into my Olympic moguls picks as a dark horse candidate because I can’t discredit his talent.  While he doesn’t have great odds, it isn’t impossible.  When you’re looking at your Olympic bets February 3rd, +4000 might be too sweet to pass up.

Who:  At 23 years old, Perrine Laffont, born in Lavelanet, France is the co-favorite in the women’s Olympic moguls bets.  Even at the young age of 23, Laffont, or Pepette as her friends call her, has competed in two Winter Olympics already.  In Sochi 2014 she was the youngest French Olympian.

Accomplishments:  While she was only 15 in her first Olympics in 2014, at age 19 in 2018 Laffont won the gold.  She returns to the competition as a co-favorite to attempt to win back-to-back gold.  She has one bronze, one silver, and three gold medals in the World Championships and two bronze and three gold medals in the Junior World Championships.

Outlook:  Favorite.  As the returning gold medal winner, Laffont is a co-favorite to win the Women’s Olympic moguls.  With plus odds, Laffont is an excellent choice for your Olympic moguls bets.  While she isn’t as much of a favorite as Klingsbury is for the men’s, she’s a name that is already well known in Olympic freestyle skiing.

Who:  One of the youngest Olympic moguls competitors, Anri Kawamura is only 17 years old.  Born in Tokyo, Japan, Anri goes by the nickname Alyssa.  She started skiing at the age of three and her parents were both professional hockey players.  Don’t let her age fool you as Kawamura is a focused competitor who placed second in her World Cup debut.

Accomplishments:  While this is Kawamura’s first Winter Olympics she has been performing very well lately, finishing 1st at both Deer Valley in Utah as well as Idre Fjall in Sweden.  She was the rookie of the year in 2019 and won the Junior World Championship gold medal this year.  In the 2019 World Cup debut she only finished 1.46 points behind Laffont.

Outlook:  Favorite.  Kawamura has a great chance at winning the Olympic moguls and is a co-favorite.   Her first World Cup gold medal was in December at Idre Fall and she will look to bring that momentum.  When you watch the Olympics February 3rd, Kawamura will be fun to watch.  She’s a great choice for your Olympic moguls bets and one I feel confident in.

The back-and-forth battle continues, as Anri Kawamura snatches the yellow bib back from Perrine Laffont today with this silky smooth performance, earning her third victory of the season and her first-ever win on Deer Valley’s legendary Champion Run! pic.twitter.com/Vb1xtC1279

Who:  Like Laffont, Jakara Anthony is also 23 years old.  She will be competing in her second Winter Olympics.  Anthony previously placed 4th in the Olympic moguls of 2018.  Born in Queensland, Australia, Anthony, known by her friends as Jak, resides in Victoria, Autralia.

Accomplishments:  Don’t discredit her 4th place finish in the 2018 Winter Olympics as it was the best ever result for an Australian female moguls skier.  Currently, the 3rd favorite for Olympic moguls bets, Anthony will look to make a name for herself and for Australia.  She has one silver medal in the World Championships.

Outlook:  Dark Horse.  While Anthony isn’t as much of a favorite in the Olympic moguls as Kawamra and Laffont, she is a talented skier who could make some noise in the second qualifying round.  At +425, Anthony is an intriguing choice for your Olympic moguls bets and one I am strongly considering.

Who:  The last Olympic freestyle skiing betting participant discussed is 27-year-old Justine Dufour-Lapoire.  Djoue, as her friends call her, skis for Canada.  Born and raised in Montreal, Quebec, Dufour-Lapoire still resides there today.  This will be her third time competing in the Winter Olympics.

Accomplishments:  Dufour-Lapoire has two bronze, one silver, and one gold medal in the World Championships.  She also has a gold medal and a silver medal in the Winter Olympic Games.  While she’s been to the podiums 43 different times, it is her Olympic experience that makes her an interesting Olympic moguls choice.

Outlook:  Dark Horse.  Justine Dufour-Lapoire at +2500 is one of the most intriguing Olympic moguls bets to me. Dufour-Lapoir won the gold in her first Olympic appearance in 2014 and won silver in the 2018 Olympics.  Her experience to not only compete in the Olympics but to place makes her less of a longshot Olympic moguls picks candidate than you’d think.  Call me crazy, but I’m placing at least half a unit on the outright winner, and if you can find a book offering top three place odds, Dufour-Lapoire is worth a look.

Make sure you continue to check back to the Sports Gambling Podcast as we are bringing you early previews and Olympic betting picks throughout the Winter Olympics.  Friday, February 4th’s events include alpine skiing, curling, figure skating, ice hockey, the luge, and ski jumping.