The Pegasus World Cup takes place at Gulfstream Park on Saturday. Inaugurated in 2017, the event features a host of invitational races that round out the U.S. racing season. The unique nature of the invitational system has led to the feature field cutting up in recent weeks and new invites being sent out, leading to a fairly top-heavy line-up. Regardless of this, something has to win, and I can almost certainly sort it out.

Knicks Go -110 – Won the Pegasus World Cup in 2021 and has since added the Breeders Cup Classic to his CV.

Got a dream run in the Classic when the anticipated speed duel with Medina Spirit didn’t materialize. He stayed on from the front and won well. If left unmolested on the front end here I can’t see anything getting to him.

Life Is Good +137 – Todd Pletcher inmate who has won five of six career starts including the Breeders Cup Dirt. This one will also be looking to get to the front, and the speed duel from the gate could determine the outcome of this race. Pletcher has aimed Life is Good at this since his Breeders Cup win. I want to see a positive ride from Irad Ortiz.

Stilleto Boy +2000 – 10 runs last year, the majority of which were credible. Ran fifth in the BC Classic without challenging the principals and that’s about the best connections can hope for today.

Sir Winston +2000 – 2019 Belmont Stakes winner who is now a rising 6-year-old. Mark Casse has kept this admirable horse in training, but the younger horses will have too much for him here, and he wants to go further than nine furlongs.

Endorsed +2500 – Has ran ok in Grade 3 before, but was the beaten favorite in the Mr. Prospector at Gulfstream latest. Looks like a seven-furlong specialist.

Title Ready +3300 – Venerable seven-year-old who occasionally pops into the winner’s circle. Had a fragmented 2021 and it remains to be seen how much ability the old boy retains.

Chess Chief +3300 – Late addition to the field due to defections. He’s a popular type, winning the Grade 2 New Orleans Classic in March, before showing up and running well throughout the year. A Boxing Day win proved his fitness and I think he can run a big race if the top two cut each other’s throat.

Empty Tomb +3300 – Might try and get to the front but will have his work cut out. Was a decent second last time out, showing a good attitude, but this race make-up looks all wrong for him.

This is effectively a match between the market leaders. Knicks Go has looked unbeatable around two turns, but I can’t get away from how easily he was given the lead in the BC Classic. Life is Good showed he is an outstanding performer in his own right with his BC Dirt win. I say he serves it up to Knicks Go and can come home stronger for the win. Chess Chief is a big price and can make up trifectas.

Trifecta – perm the above with Chess Chief 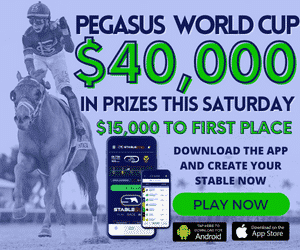 Colonel William (+375 ) – holds the key to the race. On old form, he wins, but has been off the track since June. We’ll need to trust the skill of Todd Pletcher. There are others that interest me more.  Hit The Road (+1300) wasn’t stopping under a poor ride last time and looks like relishing this extra distance. Atone (+2000) is well drawn in two and get a nice trip around to run into a place. Never Surprised (+650) is the only four-year-old in the field. A confirmed frontrunner, if Luis Saez can get him across from trap 12 I can’t see anything catching him. Winner.

Wagering Like a Pro: How To Win The 2022 Triple Crown Betting
Pegasus World Cup Picks and StableDuel Contest