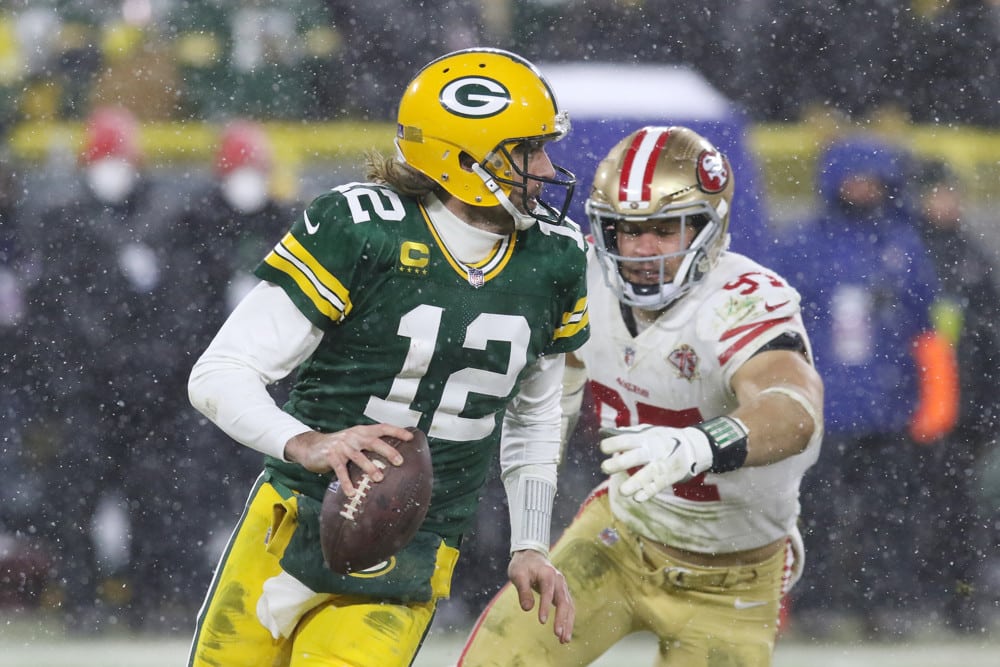 Aaron Rodger’s season ended this weekend in a heartbreaking fashion with a 13-10 loss to the 49ers at home which is really the story of Aaron Rodgers‘ career. Of course, the questions are being asked again, will Aaron Rodgers be a Packer next season? This question dominated the headlines last year when he eventually returned to the Packers for the 2021 season. But if you ask the public, that is most likely not going to happen in 2022. Below we will take a look at the trade and free agency odds to see if we can find any value in placing a bet on his landing spot. Whether it will be in a trade, free agency, or some other machinations, Aaron Rodgers will likely be on a new team in 2022.

The talk behind Aaron Rodgers’ off-season destination is already in full swing amongst sports writers and television. Where will we see him end up this season? Will he stay on the Packers for another season or will Jordan Love take over? Aaron went on the Pat McAffee show today to discuss what his offseason intentions look like. He tried to get ahead of the flying rumors surrounding where he will end up.

Based on this conversation, I think it is safe to assume we will see Aaron Rodgers somewhere next season and that it really won’t be left up to free agency. But where will he be traded? Let’s take a look at the current odds:

Of course, the Packers are the heavy favorite to see Aaron Rodgers again next year but what fun is laying -225? Let’s take a look at the other good options for him:

With Big Ben all but certain to retire, the Steelers find themselves in an interesting spot with no real commitment to any backups to take over. I could certainly see the Steelers just sticking with what they’ve got in Mason Rudolph and Dwayne Haskins, I mean they were able to drum up 8 wins in 2019 with Ben out for the season with an injury? But looking to get another experienced QB and then drafting a rookie like Kenny Pickett and training him up for a few years is also in the cards. Aaron Rodgers may be on a new team, but will it be Pittsburgh?

We know Aaron is looking for an organization that could win him a championship in the next few years. BUT if you take a look at the inverse and the odds for the Steelers starting quarterback we can find some serious value below the Steelers and Broncos.

With Derek Carr potentially on the move from Las Vegas, this could be a great trade destination for Aaron to look at. No one knows how this offseason will play out at this point. However, with the way Carr has bounced around over the years it isn’t crazy to think he could move this offseason. Especially coming in as the second favorite to be the Steelers starting QB next season. If the Steelers don’t want to pay the Aaron Rodgers price tag, Derek Carr could be a great option for them. That leaves Aaron to take over for a Las Vegas team that has been pretty decent despite their lack of consistency over the years.

We know that one big thing for Aaron is the trust he has with his receivers and I think that having Hunter Renfrow, Darren Waller and Bryan Edwards as his go-to guys will really entice him to look that way. If the Raiders can add Aaron Rodgers via free agency or trade it will certainly be a fun new offense for the Vegas team.

Personally, I think that Jameis is the most immediate choice to go to the Steelers in the mid to long term. He has shown that he has what it takes to be an NFL quarterback and I believe that this season with the Saints would have been his best yet had he not gotten injured. He is young and would be a good/cheap pickup to compete with Mason and Duane. This leaves New Orleans as a great destination for Rodgers.

The only reason I didn’t put this higher is because of the news surrounding Sean Payton leaving the Saints. With the uncertainty there he may not be willing to move down there even though it would probably be a nice weather change to Green Bay, Wisconsin. With Payton leaving New Orleans, it is unlikely this will be Aaron Rodgers’ new team.

We all know how much Aaron loves California. He even said today he will be training there this offseason like he usually does. Although Jimmy G has proven he can lead the Niners deep in the playoffs multiple times, the team is just never fully set on him and could possibly be looking to unload him this offseason. I couldn’t find odds on this destination assuming because they are still playing but it wouldn’t be the craziest place for him to end up next season to work with Trey Lance and give him some more time to learn under an experienced QB for the next few years.

With weapons like Deebo Samuel and George Kittle to target, you know he would be excited about the opportunity. Especially since they were able to beat the Packers this season in the playoffs. If the 49ers can land Aaron Rodgers via trade or free agency it would be the best choice among the new team options.

Denver was the favorite trade destination for him coming into the offseason in 2021 so it’s not surprising it is up there again with the uncertainty surrounding Teddy Bridgewater and Drew Lock. The Broncos really haven’t had any commitment to anyone since Peyton Manning and could definitely be looking to pick up Rodgers to retain the Peyton Manning-like experience. It would also give them a few years to figure out what they will be doing in the future surrounding Drew Lock and the QB situation as a whole. I don’t think that the Broncos have the weapons in their offense that Aaron would prefer. However, I think this is a much more likely trade destination for him over Philadelphia or Miami which have much more committed quarterback situations.

The Broncos were early favorites to be Aaron Rodgers’ new team, but a new coaching staff may not entice Aaron outside of a trade.