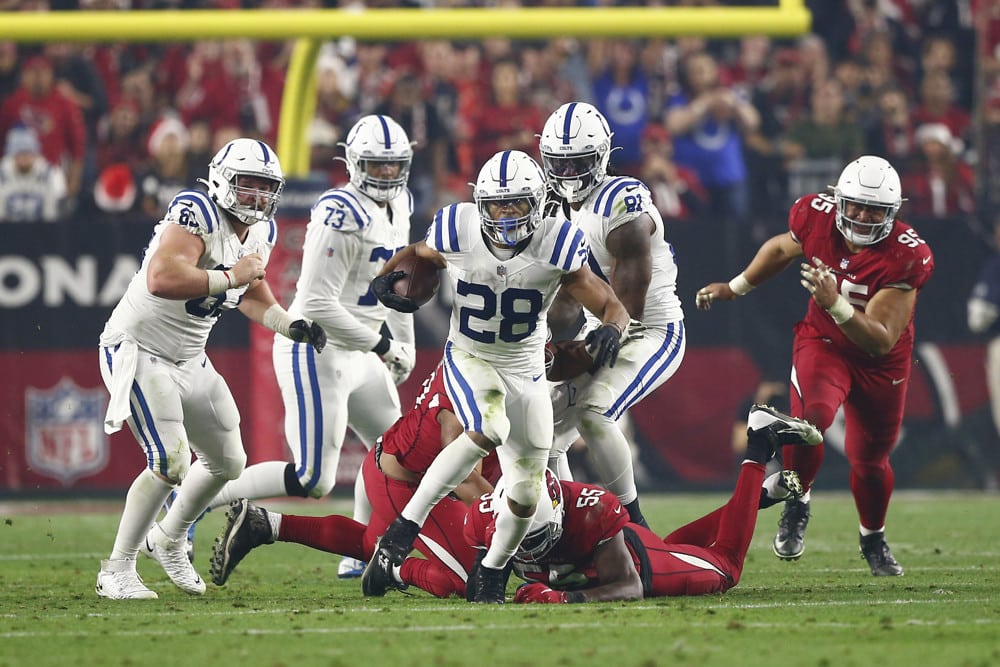 A burning question as we enter the final week of the regular season is Who’s Playing In NFL Week 18? More often than not over the years, come the last week many playoff positions would be locked in and starters would rest. Now, with the extra wildcard slot and only one team getting a bye week, it’s pure chaos as we close out the NFL regular season.

There are though, enough storylines, contract incentives, and personal records at stake to keep many players engaged until the last snap. Add to this the uncertainly of the playoff picture and we are in for one helluva finish the 2021 campaign.

Here are ten players who have reason to compete in Week 18. You can use these as a basis for prop bets, or you can take these under consideration when placing any other bets. Most all of these players are playing for teams in this playoff chaos. It makes for a fun week of football ahead and plenty of money to be made.

** As of a Sunday morning report, the Green Bay Packers will play their starters against the Detroit Lions.

Tampa Bay may not have a lot at stake outside of playoff seeding this week against the Panthers, but Tom Brady sure does. The elder statesman has just over one million reasons to not only play, but play well in the final week of the season. Brady has a couple of big contract incentives left to hit this season that is in reach. Should he find himself in the Top 5 in passer at the end of the week, he unlocks $562,500 in bonus money. He’s currently in 8th place only a few percentage points out the money. If he finishes inside the Top 5 in completion percentage or yards per attempt, he’ll earn an additional $562,500. He’s quite a ways back from that one. All that said, he’s not going out without a solid effort.

Not only does Brady have something personal to play for, but Mike Evans joins him in that category. Evans’ motivation is not monetary though as much as it’s a streak he’d like to see continue. The veteran wideout needs a mere 54 yards to reach the 1,000 receiving yards for his eighth straight season. Given the fact that his quarterback needs several things to go his way in the passing game, you can expect Evans to benefit. He was only seven yards away from this number last week in a wild one against the Jets. It’s safe to assume he’ll get there and then some in a week that doesn’t mean a lot for Carolina. Look for any props in and around the 54-yard mark for Evans this week. Take the over.

We have watched Cooper Kupp dominate at the receiver position all season long. He and Matthew Stafford have teamed up as one of the more lethal connections in all of football. In the final week of the regular season, Kupp not only has the opportunity to help his team win the NFC West and claim the number two seed, but he can shatter some records in the process. If Kupp can catch 12 more passes, he will break the single-season record. If he gains at least 136 yards on those receptions, he will break the single-season record for yardage as well. Again, there is more riding on this game than his personal achievements, but you have to know he’s going to give it his all to get his.

Most of the Bengals starters will likely not play this week against a batter Browns team. Cincinnati has almost no chance to improve their playoff position, so resting their stars for the postseason seems to be the strategy. Although, there are a couple of reasons we could and should see Ja’Marr Chase playing at least part of the game. The rookie is only 45 yards away from breaking a long-standing rookie record. He is also just 12 yards away from the Bengals franchise record by any receiver. How long he plays depends on how long it takes him to reach these marks. Knowing Chase, it could be two plays. Even still, knowing that he’s also in the hunt for Rookie of the Year honors factors into the mix as well.

Buffalo is all of a sudden in a battle for their playoff position. They have the chance to still win the AFC East and a Round 1 home game if they win. So, with all that on the line, it will be all systems go for the Bills in NFL Week 18. Of course, Stefon Diggs would like to see his team accomplish that, but he also has more in his sights on Sunday. He stands to benefit to the tune of just over $3 million with a massive showing against the Jets. Diggs is just six catches away from a $1.5 million incentive that increases his base salary over the next two seasons. We know he can do that. If he wants to see an additional $1.5 million worked into his base salary, he’ll need to gain 231 yards on the day. Against the Jets, who knows?

While Deeboo Samuel may not have any contract incentives or major milestones riding on Week 18, his team is fighting for a playoff spot. This is reason enough to expect Samuel to come out swinging for the fences in a dog fight against their NFC West rivals. Samuel has proven all season long that he can do anything his coaches as him to do. Whether that means taking a handoff out of the backfield or running the deep route, he can do it all. His prop mark is currently set at 54.5 receiving yards and 4.5 receptions. In a game this important, taking the over on both would be a good bet. The last time he faced the Rams defense, he caught 5 passes for 97 yards. Sounds like something he can get close to again this week.

There is more than just bad blood between two AFC West rivals happening this week when the Raiders play the Chargers. Neither of these teams is locked into a playoff spot. NFL Week 18 is their last hope to play for a championship. As such, both teams will be firing up their stars and hoping for the best. Las Vegas has put the ball in the hands of Josh Jacobs with a vengeance over the last three weeks. In that span, the Raiders have won all three of those games. In those games, Jacobs has seen games of 18, 28, and 20 total touches. All of that has accounted for 270 yards overall. Two weeks ago, Rex Burkhead teed off for 149 yards on the ground against Los Angeles. Jacobs is not likely to have that level of success, but any prop in the 60-75 yard range has legs.

On the other side of the ball in this matchup, the Chargers have quite the weapon in their backfield as well. There is no denying that Austin Ekeler is a major factor in the Los Angeles offense. Were it not for a missed Week 16, Ekeler would be that much closer to his first 1,000-yard rushing season. As it stands right now, he’d need to have a career day in order to get there. He’s currently 153 yards off the mark. That said, the Chargers will need him to be at peak performance if they want to make it into the dance. Fun fact, Ekeler registered his first and surprisingly only his second game with over 100 rushing yards the last time these two teams met.

To say the Colts are happy with the way Jonathan Taylor has played this season would be an understatement. Right now, Taylor is flirting with a 2,000-yard rushing season. Granted, he’s still 266 yards away. That said, we have seen him put up three games with more than 170 rushing yards. Unfortunately the last time Indianapolis faced Jacksonville was not one of them. He did still manage to gain 116 yards in that contest though, which is still impressive. Much like many of the AFC teams this week, the Colts are not yet assured a spot in the playoff. If they win, they’re in. A large part of their winning will rely on their running back. Their NFL Week 18 opponents offer very little resistance and any and all Colts bets should be on the table this week.

All it took for Rob Gronkowski to climb out of his recliner and back on the field was a phone call from Tom Brady. Now, Gronk has the potential to walk out of his second season back with yet another Lombardi trophy. Of course, that’s not all he can walk off the field with this season. He could become a million dollars richer if the chips fall his way this weekend. If he can Gronk spike a touchdown pass three times against the Panthers, he’ll trigger a $500,000 bonus. He can earn another $500,000 in NFL Week 18 if he can gain 85 receiving yards on Sunday. With how much money is in play for Brady this week, how cool would it be if he could help his friend pocket a million bucks too? Maybe he can finally afford to leave the poor USAA customers and representatives alone.