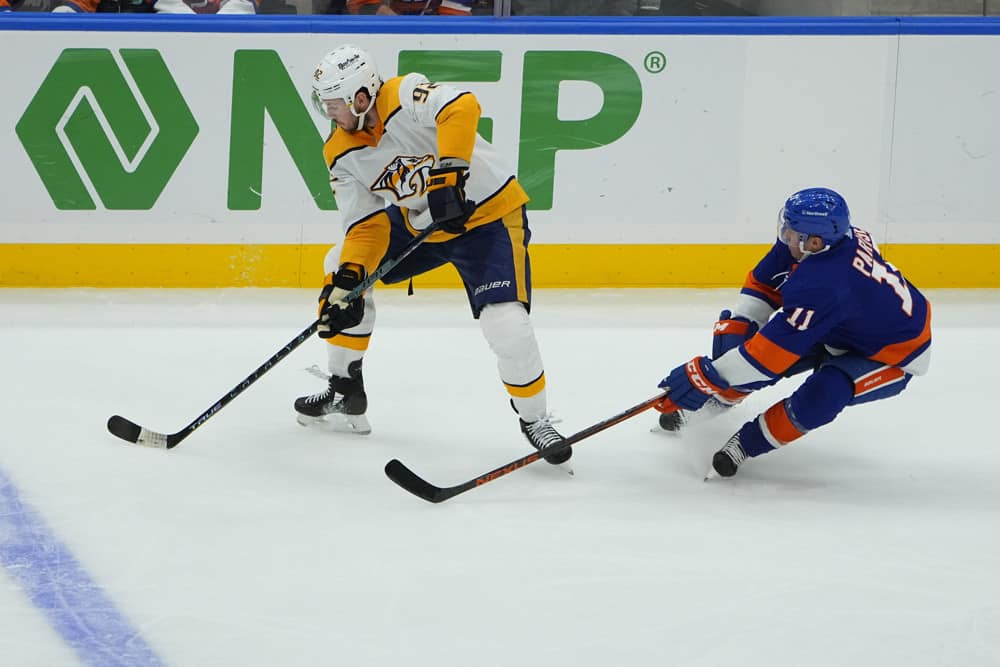 The NHL returned to action Tuesday 12/28 after a six-day league-wide shutdown. Unfortunately, Covid-19 swept through the league as more than 15% of NHL’s players were in health and safety protocols as of 12/20, just two days before the shutdown. While day-to-day operations have resumed, Fantasy Hockey Managers are still missing key players due to injury or health protocols. This makes the waiver wire even more crucial this fantasy hockey season.

So let’s take this time to review some waiver-wire options that can better our position through this volatile time. The rostership percentages derive from Yahoo Fantasy Sports; the numbers highlighted are subject to change pending your preferred platform.

Ryan Johansen returned from Covid Protocols this Monday. Johansen hasn’t played since 12/10 but has put together a strong season. He’s recorded 24 points in 27 games, and before entering health protocols, he registered 13 points in his previous ten games. Johansen lines up at Center on the Predator’s second line and winger on their 1st power-play unit. He’s seeing a fair amount of ice time and has found his scoring touch this season. His shooting percentage is at 20%, which is a massive increase from his previous season-long averages. He ranks #45 in the last 14 and 30 days in Fantasy Hockey as a Center; he should be on your waiver wire shortlist to help you win your fantasy hockey league!

Alex Tuch will debut with the Buffalo Sabres against the New Jersey Devils this evening. Tuch was traded from the Vegas Golden Knights earlier this season. However, he hasn’t been able to suit up for the Sabres, as he entered the season with a shoulder injury. Alex is finally healthy and will take the stage in a big way for Buffalo. Tuch grew up in Syracuse, NY, so this is a big homecoming! I’m buying that Tuch will make an immediate impact for Buffalo, who sits at 6th place in the Atlantic Division with a 10-15-5 record. He’ll line up on the first line with Tage Thompson and JJ Peterka and grab minutes on the first power-play unit as well. While Tuch hasn’t been a point-per-game player throughout his career, we should expect higher production based on his focal point in the lineup; he’s going to be on the ice more than any time in his career.

Connor Sheary is on a nice run right now, he’s logged a point in five straight games and seven points total in that stretch. He also ranks #20 in fantasy hockey for points recorded in the last 14 days. Sheary’s scoring trend is buyable, and I’m willing to jump it while weathering injuries and missing Covid protocol players. Most of his recent production has come from distributing the puck with assists; he has four of his eight total assists on the season in his last five games. I’m betting he can continue this run for the foreseeable future; he ranks 5th on his team in points and seems to have found a home on the second line alongside Nicklas Backstrom, who recently returned from injury. Sheary also gets minutes on the 2nd power-play unit; he’s worth a look, whether you have lineup issues or not.

Matt Roy is another player whose recent production has gone vertical. He’s recorded six assists in his last seven games played. Besides assists, Roy’s been raking up shots on goal and blocked shots. He’s averaged 2.5 shots on goal and 2.4 blocks per game across his last ten games. The Kings had missed three games due to the league-wide shutdown; they returned to action last night, and Roy grabbed an assist in the first game back. It was nice to see, given the short time away from competitive play. He’s also been logging a ton of minutes; he’s averaged 20.41 minutes in the past ten games and has averaged 21:37 on the season, numbers well above his career totals. He won’t add much in the way of goal scoring, he’s yet to find the back of the net this year, but he’s +8 and does little to harm your lineup. I’ve recently lost Roman Josi and Alex Petrangelo; I’d gladly take him to fill those voids!

3 days until the @LAKings' home opener.

Featuring: Matt Roy, who was voted as the #LAKings' Best Newcomer, Best Defensive Player, Unsung Hero, and Most Outstanding Defenseman in 2019-20.#GoKingsGo pic.twitter.com/I3sSVMRxAG

Zach Whitecloud has been an excellent streaming option in Fantasy Hockey this season. He’s not a player that’s likely to stay on your roster season long, but he’s been more consistent recently, and I believe he warrants a pick-up given his recent production. Whitecloud has recorded an assist in three straight games, and similarly to Matt Roy, his blocks and shots on goal are way up. He’s averaged 2.5 blocks and 1.8 shots on goal his last ten games played. Whitecloud has five goals on the year, which is pretty fair for a defenseman; the league-leading scoring defensemen is Cale Makar with 13 total goals. The Vegas defenseman ranks #9 in total fantasy points totaled in the last 30 days for all defensemen, he’s not a name-brand guy, but he’s worth a look if you’re facing significant losses on defense.

Charlie Lindgren has found his stride with the St. Louis Blues. He’s recorded more wins than games started this season! Lindgren earned his first win with the Blues earlier this month when he came in for relief, made three saves, and earned a win. Since then, Lindgren has made light work of his opponents, allowing just five goals on a total of 110 shots faced in four straight games. The Blues’ top goalie, Jordan Binnington, has been a shell of himself as of late; and while he does get the start tonight, he’s not a player I trust and is a big sell candidate for me. Binnington is 3-5-2 in his last ten appearances dating back to the beginning of November. He made the Covid list at the start of December but wasn’t playing well before missing time. I’m betting Lindgren will steal more and more starts to finish the season. Ville Husso is still on the IR as well; the door is wide open for Lindgren to steal the starting job and be a season-ending Gem on your Fantasy Hockey team; roster him in the meantime; he’s worth a hold and wait.

Charlie Lindgren rewarded with a post after two robberies pic.twitter.com/518owMC1Qs