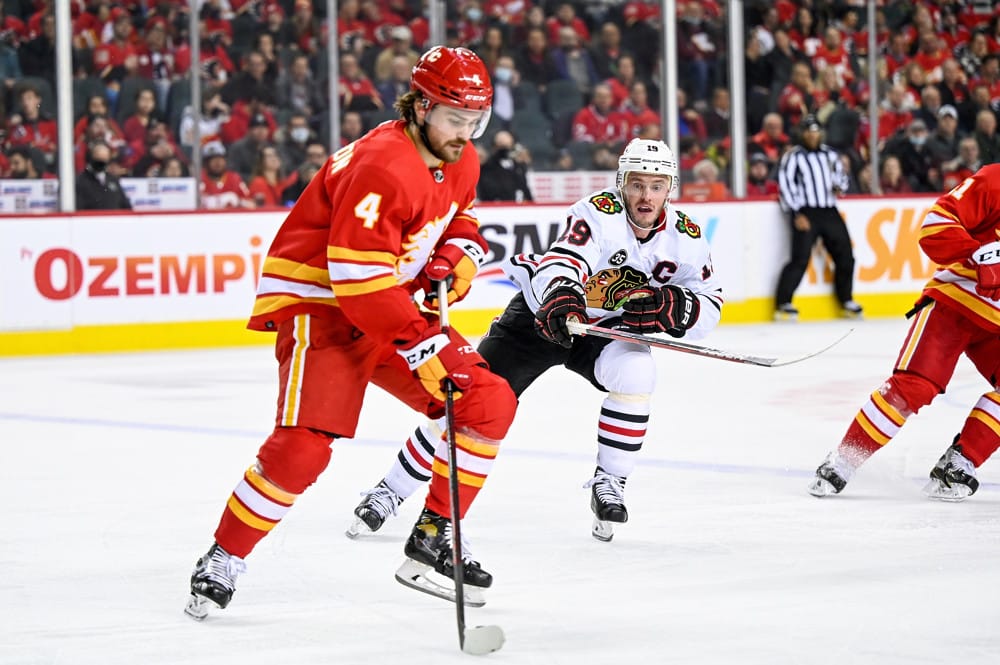 We’re getting into the thick of the NHL season which means it’s the thick of the Fantasy Hockey season as well! With two months of the season behind us, teams and players are starting to round into form. Or, on the other hand, some players are underperforming and worth a flier in a buy-low spot. Let’s get right into our Fantasy Hockey Week 10 Primer with teams to stream, pickups on the waiver wire, trade targets, backup goalie options, and more!

This week, there are a dozen teams scheduled to play four games. That extra game can provide much-needed points to push you over the edge in your matchup. For each of the 12 teams, I have highlighted a player to watch (usually rostered in less than 50% of leagues) and a potential backup goalie to pick up, if they are worthy of rostering.

Looking past the Perfection Line, all of whom should be owned in all leagues, Hall has been a bit disappointing this season. He only has five goals and eight assists with 59 shots on goal in 24 games.

Hall is still rostered in 65% of leagues, but now could be the time to buy-low on the winger. He has the skill and the Bruins are going to need their second line to step up.

Ullmark and Swayman are both good options if available in your league. The Bruins have a back-to-back in Canada to end the week.

Andersson is quietly climbing the defensemen ranks. He has 15 points (all assists), 45 blocked shots, and 42 shots in 28 games. In six December games, Andersson has four points, 13 blocks, and 10 shots.

With a back-to-back to start the week, Daniel Vladar should get the nod in either Chicago or Nashville. Both are very winnable games for Calgary and Vladar is 5-1-1 with 2 shutouts and a .928 SV% this season

Raanta is starting on Sunday in Vancouver and should start again either Saturday or Sunday against the Kings or Nashville. The veteran netminder is 4-1-1 with a.904 SV% this season.

Toews didn’t score his first goal of the season until last week and now has markers in two straight games. Captain Serious was likely dropped by whoever drafted him in your league after a slow start, but he could start coming around as the Blackhawks do.

He had three points in nine October games, six in 12 November games, and now those two goals through six December games.

Arvidsson has 13 points (five goals, eight assists) and 78 shots in 19 games. He’s on a bit of a tear recently with a five-game point streak into early December and points in six of his last eight games.

The winger has three goals and five assists for eight points to go along with 34 shots in his last eight games. Now is the time to ride the hot hand.

Johansen has been coming into his own recently. The first-line center has 24 points (8 G, 16 A) in 27 games this season, so he really should be rostered in more than half of leagues.

If Bratt is still available in your league, go put in a claim. The winger has 24 points (8 G, 16 A) in 26 games this season and, like Johansen, has been hot recently.

We’re digging deep here into the Senators, who don’t exactly have a lot of players worth rostering. Stuetzle could get there soon, though.

The young German forward only has 13 points (3 G, 10 A) and 54 shots in 25 games this season. However, he’s picked it up recently with five points and 13 shots in his last four games. Could this be a sign of things to come?

From one bad team in the Senators to another, the Kraken don’t exactly have anyone worth adding right now. Schwartz fits the bill best, though.

Schwartz had 21 points in 40 games with St. Louis last season and has 19 points in 25 games this season in Seattle. He’s shown off his offensive ability recently with three points in his last four games and 11 points in his last 12 games. The winger is a bit streaky and could be at the start of a hot streak heading into a four-game week.

At just six percent rostered with four games against relatively poor defensive teams on the schedule, Kase could be a sneaky pickup even in deeper leagues.

Mrazek returned from injury with a so-so start. He got the win but allowed four goals on 35 shots in a 5-4 win against Chicago. He should get an easier opponent next weekend against the Canucks or more likely the Kraken.

Ok, this obviously isn’t a waiver claim, but we have a great buy-low opportunity on Elias Pettersson. The Swedish center has struggled this season with just 13 points (4 G, 9 A) in 28 games. However, he’s shooting the puck with regularity as he has 64 SOG in those 28 contests.

But Pettersson isn’t seeing the results with those shots. He has a career shooting percentage of 15.9, however, so there should be some regression from his 6.3% this season. Petterson could see an offensive resurgence with Bruce Boudreau behind the bench. See if you can buy Pettersson low off of his frustrated manager.

Halak will likely get the start against the Coyotes next Sunday and that’ll be a great spot for him to get his first win of the season. Despite a 2.85 GAA and .910 SV%, Halak is 0-4-1 on the season.

Wild Bill Karlsson returned from injury with a bang, picking up two points in three games thus far. That brings him up to five points in 11 games on the season, which is low for the Vegas forward. He had 39 points in 56 games last campaign.

Karlsson is reunited with Jonathan Marchessault and Reilly Smith on the second line and could move up to the top line between Max Pacioretty and Mark Stone if Keegan Kolesar doesn’t work out.

There’s no way that Karlsson doesn’t pick it up soon. Pick him up before he really picks it up.

Brossoit should get the start either in Newark or New York, and it’s likely that it’ll be against the Devils with Lehner playing against the better team. The Vegas backup is 5-2-0 this season with a 2.66 GAA and .911 SV%.