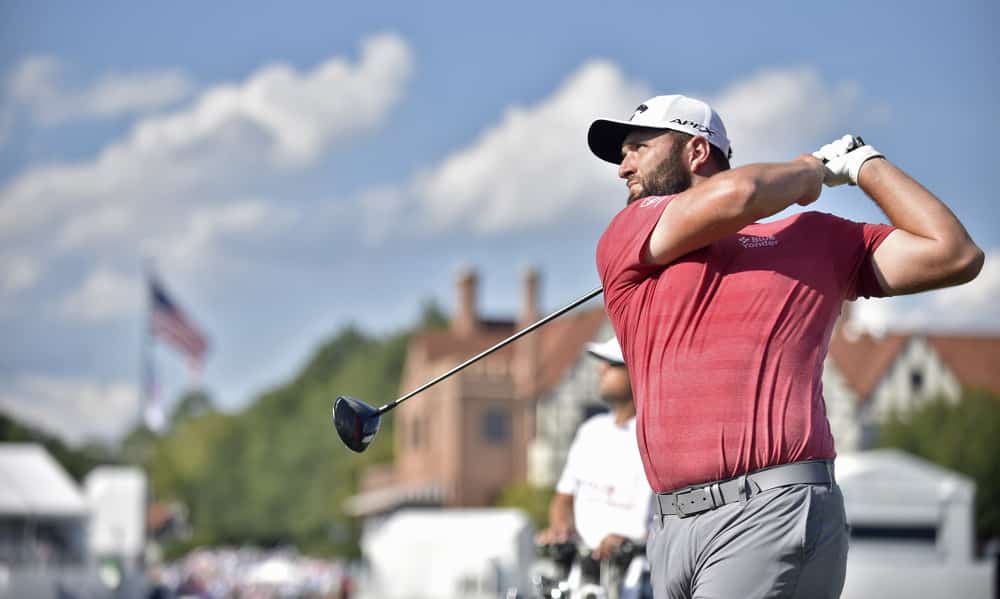 Many golfers appear in dozens of matchups every year on sportsbooks. So which ones made the most money for gamblers? And which ones cost bettors the most. Here’s a list of the most and least profitable golfers on all PGA Tour matchups in 2021 (minimum of 50 matchups appeared in).

2021 wasn’t a great year for Gary Woodland. He slipped in the OWGR from #40 to #121 by the end of the year. But for gambling purposes, Gary Woodland was a very reliable player to use in PGA Tour matchups in 2021.

Woodland went 38-24-3 combined in 72 Hole and Round-by-Round matchups in 2021. While it was an up and down year, Gary Woodland capitalized for gamblers in his peak performances. His best showings for bettors were the Wells Fargo Championship, the Barracuda Championship, the Valero Texas Open, the CJ Cup @ Summit, and the Charles Schwab Challenge. At these five events, Woodland netted gamblers a combined 16.3 Units and an ROI of 78%.

While Woodland may look back at 2021 as a disappointment, his backers in PGA Tour matchups certainly will not.

Kevin Na had a traffic year. He won the Sony Open, lost in a playoff at the Wyndham, and showed very well at the Tour Championship. But he also did fantastic for his backers in head-to-head matchups. Na went 45-26-7 in all matchups in 2021, netting bettors a profit of 14.9 units.

Where Na really excelled was when he was an underdog. He found himself an underdog to his counterpart in just under half of his matchups in 2021. He rewarded those who backed him with a 20-13-3 record. That netted 9.4 units or a 26.1% ROI. Kevin Na was a great zag to use all year long.

2021 was a banner year from Jon Rahm. He won his first major. He welcomed the birth of his first child. And he was an absolute stud in PGA Tour matchups all year long.

Bettors typically had to lay big juice to back Jon Rahm in a matchup. Out of 109 matchups, Rahm was only an underdog in one of them. And he was a -150 or greater favorite in almost 65% of his total matchups. And by the FedEx Cup playoffs, you rarely could find him better than a -175 favorite.

Despite all the juice, a bettor would pay, anyone who bet 1 unit on Rahm in each of his matchups would net 20.8 units on the year, or 19.1% ROI. Rahm went 73-23-13 overall in 2021. A truly dominating performance that matched his stellar play on the golf course.

Talor Gooch was an underrated darling in the golf gambling community in 2021. He seemed to be a trendy longshot winner in many tournaments in 2021. He finally rewarded all his backers with a win at the RSM Classic at 45/1.

But Gooch seemed to be rewarding gamblers much earlier than that. In 2021, Gooch went 55-27-9 in all PGA Tour matchups, including 15-6 in 72 Hole Matchups. Betting 1 unit on Gooch in each matchup would have been profitable in 17 of 25 PGA Tour events he played in 2021. And of the 13 tournaments he played after the PGA Championship, the only tournaments Gooch would have lost money for a gambler was the Wyndham and the Shriners Children’s Open.

Blindly betting on Talor Gooch in PGA Tour matchups was one of the safest and most profitable bets to make in 2021.

The PGA Tour Matchup MVP of 2021 is a golfer you wouldn’t immediately suspect. But Seamus Power’s breakthrough 2021 season paid big dividends for gamblers.

Seamus Power went an absurd 33-14-6 in his 2021 matchups on the PGA Tour. Blindly betting on Seamus Power in any event he played would have been profitable in 11 of 16 tournaments. And where Power did most of this damage was round-by-round matchups. Seamus Power went 29-9-6 in individual round matchups in 2021. He was an absolute stud to use in that particular matchup.

Seamus Power used to be a little secret to the golf gambling community, but now the word is out. He’ll start getting paired up in tougher matchups in 2021. If he continues to be this profitable, big things are in store for him.

After Dustin Johnson’s stellar 2020 season, his follow-up in 2021 left much to be desired. DJ only won once in 2021, and it wasn’t even on the PGA Tour. He only had one Top 10 at a major and wasn’t a contender in any of them. He was a non-factor in the FedEx Cup playoffs. It just wasn’t a year to remember for Dustin Johnson.

It also wasn’t the year to remember for anyone who backed Dustin Johnson in matchups. Because books still priced Dustin Johnson as one of the top favorites at every tournament, he was typically paired against very elite golfers. The results weren’t pretty. Johnson went 48-56-7 in all 2021 matchups. The total result doesn’t look so bad, but the juice one would typically have to pay on Dustin Johnson in a matchup really added up. Dustin Johnson was profitable for bettors in only 5 of 18 tournaments played. His best result was netting over 6 units at the WGC FedEx St. Jude, a golf course he has a great history at. He combined to lose almost 31 units in his matchups across his remaining 17 events.

Dustin Johnson showed at the Ryder Cup he has some stuff left in the tank. There’s nowhere to go but up from here. If books start adjusting his pricing, maybe he’ll become one of the better values in matchups in 2022.

The prime of Matt Kuchar’s career is long past. And that was on full display during a lackluster 2021. Kuchar didn’t record a single Top 10 in any stroke play event in the calendar year. And his 50 round moving average strokes gained on the field is the lowest it has been since 2009.

Given he’s a popular name, though, books would often pair him in matchups to try and garner action. Those who backed Kuchar were hammered. In 2021, Kuchar went 6-8 in 72 Hole head-to-heads, losing 2.4 units and generating -17.2% ROI. But where Kuchar really killed bettors was in-tournament plays. Kuchar went 16-25-3 against opponents in round-by-round matchups. The only round Kuchar turned a profit for gamblers was Round 3. But across Thursday and Friday and in the Final Round, Kuchar cost bettors almost 12.4 units.

Kuchar attributed his struggles to chasing distance in 2021. He has since abandoned that plan, and the results during the Fall swing were encouraging. Maybe one last run is in the cards. But if not, he’ll continue to be a stay away for gambling in 2022.

Like Kuchar, Bubba Watson is on the downside of his career. Bubba Watson wouldn’t be someone one would call an athlete. And as he ages, so too will his form. For years, Bubba got by thanks to his incredible length. But as more and more around him catch up to him off the tee, the other weaknesses in his game are exposed.

There wasn’t a single situation where backing Bubba in a matchup turned an overall profit in 2021. He was 5-8 in 72 hole head-to-head matchups and 20-27-7 in round-to-round matchups. Blindly betting on Bubba all year would have cost one money in pre-tournament and all in-round matchups. There were his usual “Bubba” tournaments where he was profitable, like the Masters, the Travelers, and the Waste Management Phoenix Open. But when Bubba was off, he was very off and cost bettors dearly.

He showed in 2021 that at tournaments he has a good history in, Bubba can be useable. But outside of that, he appears to be an auto-fade in 2022.

Those who still believed in Jason Day were punished severely. Day went 3-8 in 72 hole matchups in 2021. That cost bettors 5.6 units and generated -50.8% ROI. But the time he punished bettors the most was in Round 1. Jason Day got off to horrible starts in 2021, and it showed in these types of bets. Day went 3-9-2 in Round 1 matchups. That cost bettors over 7 units and generated another -50.3% ROI. Blindly betting on Jason Day would have been profitable in only 4 of 15 tournaments in 2021. And none of those four profitable tournaments would have resulted in more than 0.9 units won.

Recently, Jason Day showed off his brand new practice facility at his Columbus, OH home. He also revealed that he has been working on some swing changes with Chris Como. If those take, maybe he can once again become a reliable option in matchups.

Justin Rose certainly had his moments in 2021. He was the first-round leader at the 2021 Masters, and he showed well at the 2021 PGA Championship. But Justin Rose’s 2021 season is defined mostly on poor play and back injuries.

Gamblers will remember Justin Rose as a thorn in their side. Rose went a seemingly impossible 1-11-1 in 72 hole matchups, costing gamblers over 11 units. He also went a miserable 13-24-5 in round-by-round matchups, costing gamblers another 11 units. And blindly betting Justin Rose wouldn’t have generated a profit in any tournament he played. Even in the Masters or PGA Championships, his two best tournaments of the season.

Justin Rose must go back to the drawing board if he hopes to return to the European Ryder Cup team. But until he shows form, he looks to be a blind fade in 2022.

Should You Blindly Bet Underdogs In Golf Matchups?
2022 Majors Preview and Picks