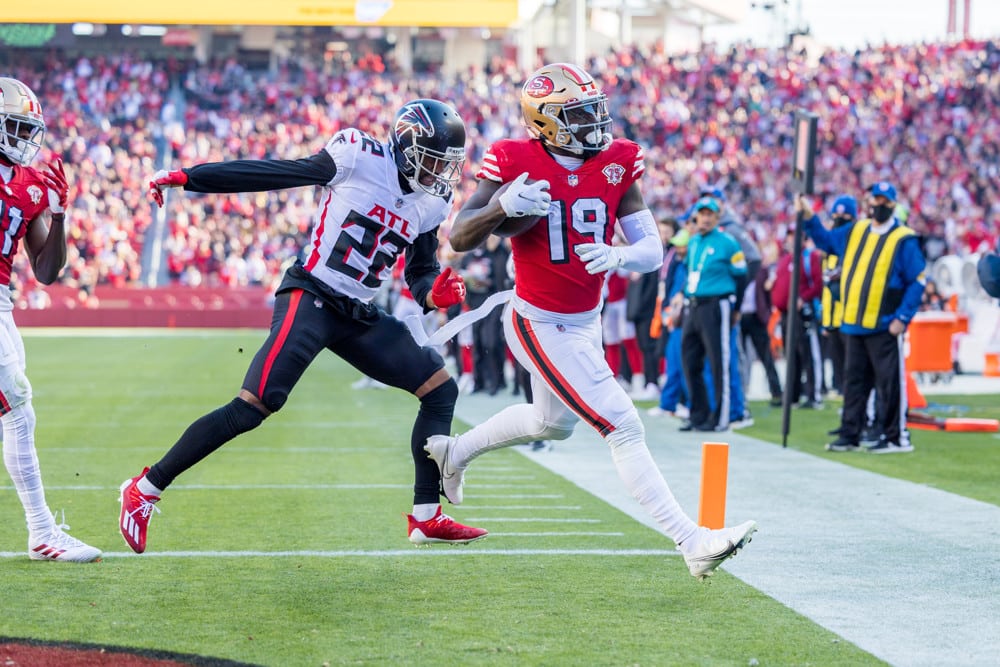 The longest week in the NFL is finally over and now it’s time to look ahead to the Week 16 NFL Thursday Night Football DFS slate. This game features one team fighting through a slump against another that is on a tear. The 49ers have won five of their last six contests. Tennessee on the other hand has lost three of their last four games, including one to the Texans.

There is not a ton to get excited about in this slate. Both quarterbacks are far from lighting up the scoreboards. The running games for both teams have been the highlight, but that usually leads to low-scoring, long possession games. With that in mind, keying in on some potentially helpful players off the grid will be the move this week. Once again, this article he here to help identify a few.

Normally, this article stays away from giving out the more obvious selections. In this case, though, there is no getting away from Deebo Samuel. He will likely be the building block around everyone’s cash game lineups and for good reason. Over the last several weeks, we have witnessed the emergence of Samuel as a running threat. Since Week 10, Samuel has had at least five carries a game. What’s more, he’s registered a rushing touchdown in six straight games. What also makes him a slam dunk is his consistency. Samuel has yet to have a game in which he has failed to reach double-digit fantasy points in DraftKings PPR format. It’s no coincidence that his team is heating up as his involvement in the running game increases. He is the most expensive player on the slate but fade him at your own risk.

Deebo Samuel is the best RB in football
pic.twitter.com/sLbCblr6UP

Tennessee boasts one of the more complete defenses in the league. They are among the top two against opposing running backs. On top of that, they are in the middle of the pack when it comes to stopping the opposition’s wideouts. That said, they have yet to face a double threat like Samuel this season. Look for the 49ers to exploit this fact. As such, they will continue to use their Swiss army knife in new and creative ways. In fact, how incredible would it be if Kyle Shanahan ended up deploying Samuel as a pure wideout again this week? Only two receivers have eclipsed the 100-yard mark against the Titans this season. One of those happened to be a 173-yard outing by fellow NFC West receiver Tyler Lockett. Samuel possesses the same potential in this Week 16 Thursday Night Football matchup.

With Elijah Mitchell on the shelf, Jeff Wilson Jr. emerged last week as the San Francisco running back of choice. Wilson racked up 21 carries against the Falcons turning them into 110 yards and a touchdown. He had the clear edge over JaMycal Hasty and even Deebo Samuel in that regard. The 49ers have been a run-first offense for quite some time. They have leaned on their running game to take the pressure off of Jimmy Garoppolo. It has worked well recently and is a major reason for them winning five out of the last six games. Where this could get exciting is if Mitchell does come back for the Thursday night game. Last season, Wilson emerged as a receiving threat. He might fill that role once more should his teammate return to the field. A few receptions will go a long way in his return on investment.

Again, it will be tough sledding for any of the 49ers running backs. Only James Robinson has rushed for at least 100 yards against them. The only other time a running back has hit at least 70 yards was Jonathan Taylor back in Week 8. No San Francisco running back is a lock this week. If Mitchell is out for this game, Wilson factors pretty heavily into the mix. Should Mitchell start, you can load Wilson up in the hopes that he can catch a few passes. What you are hoping for is a game similar to the one Brandon Bolden had a few weeks back. In that game, the Pats running back caught four passes for 54 yards. If Wilson can do that and add a few carries to his total, you will have a quality Week 16 NFL Thursday Night Football DraftKings option.

Every week, you can count on George Kittle, Brandon Aiyuk, and Samuel to command targets. Over the last two weeks though, Jauan Jennings may have entered the conversation in a meaningful way. Jennings has three receptions in each of his last two games. He’s seen at least five targets in them as well. Last week, he scored his third touchdown on the season. With Samuel lining up in the backfield more and more lately, more receivers are getting looks now. To that end, Jennings becomes an interesting GPP play this week. He certainly is trending in the right direction. It’s not a bad bet to assume Jennings will get another opportunity to prove to his team that the last two weeks were not a fluke.

Once again, San Francisco will be faced with a challenge this Thursday night. Tennessee has shut down their fair share of opposing wide receivers this season. This includes just about every Pittsburgh, Jacksonville, and Houston pass catcher. Since Week 11, only Jakobi Meyers has even come close to the 100-yard mark. Despite this, there is still a chance that Garopplo will be able to connect with his second or even third option enough to make his play worth the risk. His price tag offers at least some relief and makes sliding Samuel into the captain’s spot a little easier to accomplish. Feel free to sprinkle Jennings into at least a few of your tournament lineups as he will likely be lightly rostered across the board. If he has a good night, you’ll have a good night along with him.

Last week, Julio Jones left the game with a hamstring injury. In his absence, both Nick Westbrook-Ikhine and Chester Rogers saw a slight uptick in usage. The former garnered seven targets catching four of them for 32 yards. Of course, those numbers do not inspire a ton of confidence, he carries with him enough potential to take a chance on him. We have seen double-digit outings for Westbrook-Ikhine on three occasions. The best of which was his breakout, seven-catch, 107-yard game in Week 11 against the Texans. Should Jones miss another week, Westbrook-Ikhine becomes the defacto number one wideout for the Titans. His value increases if A.J. Brown is unable to suit up Thursday night as well.

Over the last three weeks, the San Francisco defense has been exploited by at least one opposing wide receiver. Last week, Russell Gage caught eight passes for 91 yards and a touchdown against them. The week prior saw Tee Higgins tee off for 114 yards on five receptions. It’s not out of the question to expect that Ryan Tannehill will be able to also enjoy some success against a secondary that has shown some weakness as of late. Roll out this Week 16 NFL Thursday Night Football play out lightly, but do it nonetheless.