The good times kept rolling last weekend at UFC Fight Night: Holloway vs Rodriguez, as I picked a bunch of winners again. The UFC is back at it again this weekend before taking next week off for Thanksgiving. Let’s put together a UFC Vegas 42 DraftKings winning roster for this Saturday’s festivities. 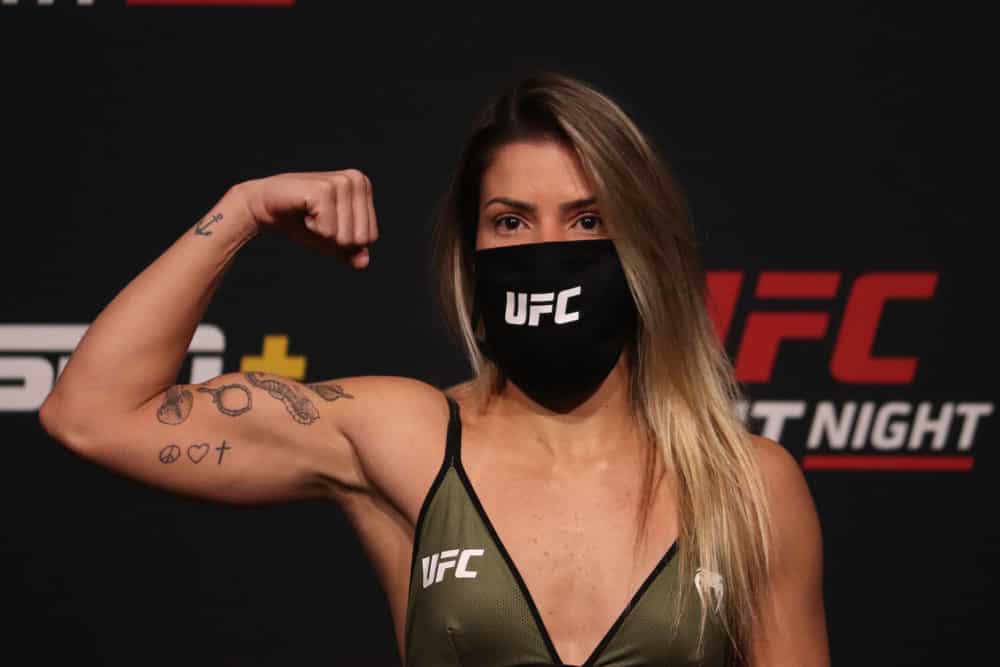 I go to the curtain jerker for my big ticket pick-up this week, grabbing the biggest favorite on the card, Luana Pinheiro. She made a big splash in her UFC debut against Randa Markos, posting 129.4 fantasy points in a fight she was dominating before winning via disqualification. It was the only fight of her last seven that she didn’t finish her opponent in, so the chance for big points once again is in effect this weekend, especially considering her opponent Sam Hughes is stepping in here on short notice.

There’s been no stopping Sean Brady in his pro MMA career thus far, as he’s gone a perfect 14-0, including winning all four of his UFC fights. He’s been extremely consistent in those four appearances, posting between 99 and 105 points in them, including 104 in both of his last two fights. He’s fighting fellow grappler Michael Chiesa this week in a matchup where Brady should be the better striker and the physically stronger man in the cage.

‘T.Wrecks’ burst onto the UFC scene this past summer, taking a fight on short notice against Matt Frevola in which he knocked him out in seven seconds. This earned him 126.8 fantasy points, and I think he can score similarly this weekend against Fares Ziam. McKinney is a finisher, with none of his 11 pro wins going to the distance – here’s hoping for another short outing at UFC Vegas 43.

With a nickname like ‘Mr. Perfect’, Kyung Ho Kang really shouldn’t have eight MMA losses, should he?! Nontheless, I’m expecting Kang to be close to his moniker this weekend against Rani Yahya, as he’s the better striker of the two and is also a strong grappler. Plus Kang is on a hot streak, going for triple digits in two of his last three fights, while still posting 93 in his last appearance.

Qileng Aori lost his UFC debut, but still scored 66.8 points, which is encouraging. I expect him to get his hand raised this weekend against Cody Durden, as he’s a more active striker of the two and slightly bigger. But even in defeat, he should post enough points to make him a worthy addition.

Finally, I’ll add the streaking Tucker Lutz to my UFC Vegas 43 DraftKings lineup. After dropping his pro debut, ‘Top Gun’ has won 12-straight, including a 93-point effort in his UFC debut. He’s far more active striking than this week’s opponent Pat Sabatini as well as being a strong grappler. I like his potential for this low price.