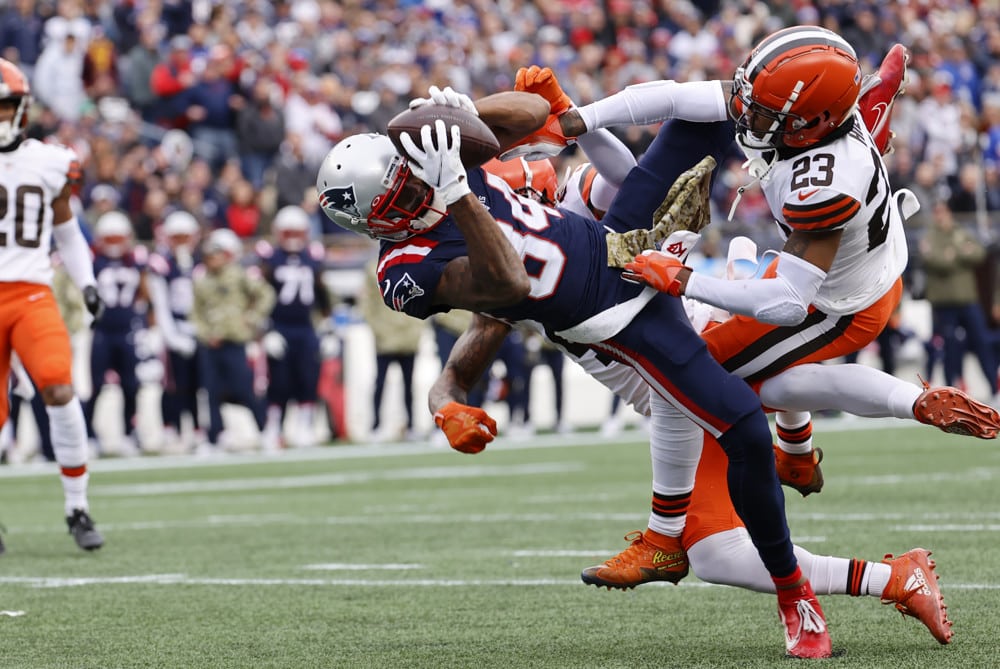 If you were to sum up this Week 11 NFL Thursday Night Football contest in one word, that word would be, “ouch.” Not just from the fact that it features a struggling and anemic Atlanta team, but also because injuries play a large part. Several players have carried a destination heading into this week’s practice. Some are already cleared to play. Others still have their fate yet to be determined. Both of these teams rely quite heavily on their main playmakers which will make finding value more of a crap shoot than normal.

A lot of roster decisions will be contingent on the status of Cordarrelle Patterson. The surprising veteran Swiss Army knife has been limited in practice this week. As of now, he is considered a game time decision. Should his ankle injury keep him out this week, he leaves behind a trail of question marks. On the other side of the ball, Damien Harris has cleared concussion protocol and is a full go for Thursday’s game. This takes a significant bite out of Rhamondre Stevenson’s potential. All things considered, this game is likely to be another in a long line of underwhelming midweek matchups. You will have to eat some chalk if you hope to cash in this one. This includes Kyle Pitts and both quarterbacks.

A concussion kept Damien Harris out of last week’s matchup with the Cleveland Browns. Before that though, the third year back was gaining some momentum. In Week 6, and again in Week 7, Harris topped the 100-yard mark in rushing yards. He fell short of that the following week against the Chargers, but still managed 80 yards on 23 carries. Even more impressive than that is the fact that he has logged at least one rushing touchdowns in each of his last five games. Harris has emerged as a trusted member of this young Patriots team. His rookie quarterback has leaned on him to keep some heat off, and so far, it has paid off.

He’ll have a golden opportunity to prove that he is for real this week. The Atlanta Falcons run defense has been roughed up more than a few times this season. This includes last week when Ezekiel Elliot ran the ball into the end zone twice against them. That said, they have yet to allow an opposing running back to reach the 100-yard mark. Of course, that hardly matters considering they have given up nine touchdowns on the ground to the position this season. In fact, they have only managed to keep running backs from scoring on them in only two games. They are currently on a three game streak of allowing a rushing touchdown. The writing is on the wall for Harris to return to form. He’ll enjoy another productive fantasy outing and you will benefit from having him in your lineup.

When it comes to the pecking order of New England pass catchers, Kendrick Bourne continues to keep himself safely in the conversation. In his first season with the Patriots, Bourne finds himself third on the team in total targets. In fact, he is only two behind Nelson Agholor for second place in that department. Of course both of them are well behind Jakobi Meyers for the lead. Last week, Bourne stepped up nicely for his team in their win against the Browns. In that matchup, he caught all four of his targets for 98 yards and a touchdown. He also added three carries and 43 yards to his overall total. He seems to be edging out Agholor as the go to guy behind Meyers. What’s more, he’s outpaced Meyers in production more than a few times over the last several weeks.

This week, he’ll face an Atlanta defense that just surrendered a combined 187 yards to CeeDee Lamb, Amari Cooper, and Michael Gallup. The Falcons secondary has been exploited by the likes of DeVonta Smith, Terry McLaurin, and Jaylen Waddle. Each of these wideouts has reached at least 70 receiving yards against Atlanta. All but Waddle managed to score a touchdown. Truth be told, there will not likely be very much in the way of the passing game to go around anyway for New England. What little there is though will likely find its way into Bourne’s trustworthy hands. He probably won’t be a slate buster, but he should certainly be a staple in more than a few of your Week 11 NFL Thursday Night Football lineups.

Not many people could figure out exactly what was going on in New England when they signed both Jonnu Smith and Hunter Henry this offseason. From a fantasy perspective, putting two viable tight ends on the same team severely cuts into their individual value. Which is exactly how it has played out so far this season. Neither have claimed a sizable foothold in the passing game. It is Henry though, that has provided some manner of separation from his counterpart. Over the course of the season, Henry has logged five double digit fantasy games. Smith only has one. With Smith out of last week’s game, Henry enjoyed his best fantasy day. Against the Browns, the former Charger caught all four of his targets for 37 yards and two touchdowns. Smith is still fighting through his shoulder injury which only improves Henry’s situation.

You may have thought twice about this play If you took a look at the overall statistics of how well opposing tight ends have fared against the Falcons so far this season. That said, if you took a deeper look, you’d figure out why. The hit list has not been at all intimidating to say the least. Henry will almost certainly be the best tight end they will have faced in weeks. The last big name they faced at the position was Rob Gronkowski back in Week 3. Gronk caught four of his five targets for 39 yards and two touchdowns that day. Again, the decision to roster Henry gets easier should Smith sit out this game. Keep an eye on the inactives leading up to kickoff.

The phenomenon that is Younghoe Koo (or 구영회 for our Korean audience), is just plain fun. From his unlikely rise to fame with the Chargers, to his time with the Atlanta Legends of the Alliance of American Football, Younghoe Koo has just been flat out fun to watch. He’s got a big leg and, as cliche as it sounds, doesn’t let a moment get too big for him. Unfortunately for him, the Falcons offense has not given him much of an opportunity to shine. So far this season, only once has he attempted more than two field goals in a game. In 16 attempts, Younghoe Koo has made all but one. His tally includes two kicks of more than 50 yards and three game winning field goals.

You are going to need salary relief on this slate if you are looking to roster both quarterbacks. In Younghoe Koo, you have the potential to find enough value to stuff the rest of your lineups with the major players on the slate. Should he connect on a couple of lengthy tries, your Week 11 NFL Thursday Night Football contests could be a lovely shade of green.