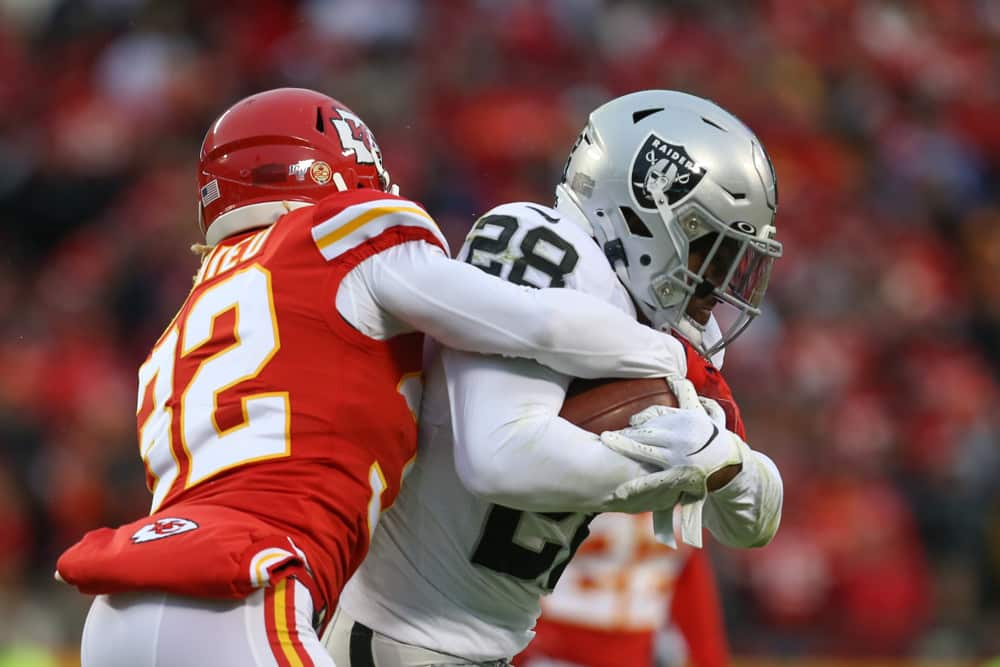 Boy, every half yard matters when you are betting on NFL Prop Bets. Thursday Night Prop bets ended up going 1-2 losing one prop by half a yard. But that’s the industry we are in. Nonetheless, I will bounced back tonight in the Sunday Night Football game between AFC West rivals. The Kansas City Chiefs will visit the Las Vegas Raiders. Below are my three player prop bets for the game!

There’ no secret the Kansas City Chiefs rush defense is one of the worst in the league. In fact, Chiefs rank #27 in opponent yards per rush attempt. Furthermore, the Chiefs are allowing 4.8 yards per rush attempt on the road this season. Josh Jacobs returned from injury two week ago and seems to finding his stride again. Last week against the Giants, Jacobs rushed for 76 yards on 13 attempts. Additionally, Jacobs has four career games against the Chiefs. He has exceeded 57 rushing yards or more in three out of the games. I believe Jacobs should have success tonight against the Chiefs.

The Chiefs love running “fun” and exotic plays on offense and much of it is predicated on Tyreek Hill. As a matter of fact, Hill has played in nine career games against the Raiders. In seven of those nine games, Hill has recorded at least one rush attempt and accumulated 70 rushing yards. Tonight, I am asking him to get us two rushing yards. We may see the Chiefs pull out a few tricks or gadget plays.

Hunter Renfrow has become that guy for Derek Carr. Meaning he is the security blanket and go to guy when you need a big reception. Renfrow is having a break out year and more so recently. In fact, over the last five games, Renfrow has five or more receptions. Furthermore, Renfrow is averaging close to eight targets in that span. Now that Ruggs is not on this team anymore, Renfrow production should see an increase tonight as the Raiders play the Chiefs!