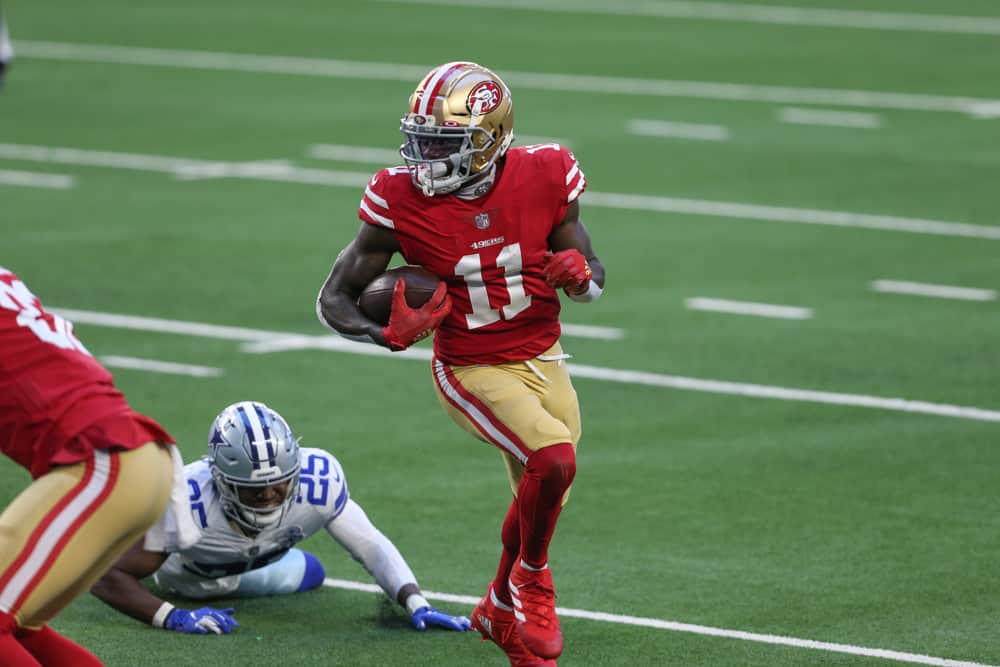 Nine weeks into the NFL season, the Fantasy Playoff picture is starting to come together. At this point, hopefully, your squad is at least still holding on to hope and you’re ready to spend big on FAAB. And, if you’re feeling comfortable about a playoff berth it’s time to stock up and put some more depth on the bench to make a real run.

I’ll start with my favorite guy on this week’s wire, Jordan Howard. If you’ve been watching any Eagles football this year the last two weeks have been quite puzzling. Before his injury Miles Sanders was hardly being used and was surprisingly being outperformed by rookie Kenneth Gainwell. However after Sanders’ injury, Howard was brought in off the practice squad and has usurped Gainwell’s role entirely. Over the last two weeks, Howard has taken 29 carries for 128 yards and 3 touchdowns. While the Eagles’ backfield scenario has made little sense up till now, this is the most consistent output we have seen. I’d spend up to 20-25% of FAAB on Howard here in Week 10 as I think he could be an every-week starter, at least till Sanders comes back.

This season is starting to come full circle as I’m once again writing about Brandon Aiyuk’s upside. Entering this season I was pretty high on Aiyuk, but we all know how that turned out. Aiyuk barely touched the ball through 8 weeks and was dropped in most leagues. However, this week we saw a flash of what many expected from him heading into the season. He was targeted 8 times and caught 6 of those for 89 yards and a touchdown. While I understand this was one week and his team was trailing big most of the game, I think this could be the spark he needed to get going. I’d spend about 12% of your FAAB on Aiyuk if your team is desperate for WR help, if not you may be able to get him for less heading into Week 10.

On a positive note, it looks like the 2020 version of Brandon Aiyuk is officially back. #49ers pic.twitter.com/iRhmllN3rR

Coming into this season many had Jets rookie WR, Elijah Moore down as a potential sleeper. However, he failed to live up to preseason hype and has remained on waivers in many fantasy leagues. Since the QB switch to Mike White and then eventually Josh Johnson we’ve seen a different Elijah Moore. Two weeks ago Moore caught 6 of 6 targets for 67 yards and followed it up this week with 7 catches on 8 targets for 84 yards and 2 TDs. If these past two weeks are a sign of things to come Moore could find his way into starting lineups soon. Spend about 10 to 12% of your Week 10 FAAB on him.

If you stay up to date on this article every week, here comes a repeat name: Taysom Hill. While Hill failed to live up to his expectations this week I’m not too worried about that. What makes me like Hill more is the performance of Trevor Siemian. While Siemian did not perform terribly I think the Saints loss is enough to raise some questions in the Saints organization. I wouldn’t be terribly shocked to see Taysom Hill take the reins next week and if he does he’s worth an add. For a dual-threat QB of Hill’s caliber, I would go up to 15% if he is officially named the starter, but if not I’d spend about 8% on a potential lottery ticket.

Asked Payton if Trevor Siemian was the starting quarterback going forward now that Taysom Hill is healthy and he gave the same answer as last week about doing what was best for that particular week. I did not expect a real answer from that one but I tried!

Despite his low rostered percentage, Tim Patrick has been relatively consistent all season. He’s averaging 12.1 PPG and has put up double-digit points in all but 3 games this season. This means if you’re in a really deep league he’s likely on a roster. However, if you’re not Patrick could still be worth a look. This week he caught 4 of his 5 targets for 85 yards and a touchdown. With an average of 56.6 yards per game all, we really need is a slight uptick in receptions per game to make Patrick an every-week starter. For that risk and potential reward, I’d be willing to put down about 7% of your weekly FAAB.

Bills HB Zack Moss left Sunday’s game with what was likely a concussion which could leave him sidelined next week. If that is the case expect Devin Singletary to see a production uptick. While the Bills don’t traditionally use their running backs an insane amount, a starting running back is still always worth a play. Keep an eye on this situation but if you need a running back for next week Singletary is worth about 2% of FAAB.

Zack Moss has been downgraded to out (out). https://t.co/EuChPskioR

If you’re in need of a tight end for next week, Dan Arnold is worth a look. Over the last four weeks, we’ve seen Arnold targeted 5 times in each. On top of that, he’s seen 17 targets in the last two weeks. It’s clear that Lawrence has found a target he likes and I would expect that Arnold finds the end zone soon after failing to for the first 9 games. We all know that tight end is a pretty thin position so if you’re facing an injury or bye, spend about 2% of your FAAB in Week 10 on him.

Everybody knows this is not a prolific Ravens defense of the past. However, if you’ve been streaming defenses thus far, or need to this week look no further. The Ravens have the Dolphins this coming week and are primed for a bounce-back performance on defense. While as I mentioned, this is not a defense you necessarily want to back, we’re looking at a fade of the Dolphins. Miami ranks 2nd in total giveaways with 18 and should cough up the ball at least once next week. Spend about 1 or 2% depending on the size of your league.

Deonte Harris has had a few pretty solid games this year but the workload has been an issue. However, over the last two weeks, we have seen that change. The workload is finally starting to increase (perhaps Siemian has a preference for him) he’s received 7 and 8 targets over the last two weeks. If this kind of target share continues he could become a higher priority on the waiver wire.

DeSean Jackson was signed this week by the Las Vegas Raiders after the Rams failed to unload him at the deadline. While Jackson is certainly getting up there in age, his stint with the Rams showed he still has some dynamic ability available. With the Raiders in need of a deep threat, I think Jackson could be a low-risk high-reward candidate.

Many of you may remember Jeff Wilson Jr. from last season. He was very productive putting up 10 total touchdowns on 600 rushing and 133 receiving yards. While Wilson was extremely productive last year, he has yet to play a snap this year after coming off the PUP this week. For a no-bid, under-the-radar target I think Wilson possesses some decent upside.

You never want to put too much stock into one game so that’s why I’m recommending a no-bid on Olamide Zaccheaus. While he hasn’t really done much this season it’s hard not to notice 58 yards and two touchdowns. For a gamble that Ryan has found a potential guy to fill some of Calvin Ridley’s workload, I’d be comfortable taking a shot at Zaccheaus after the Week 10 FAAB run.

While many fantasy managers don’t really pay attention to their kicker spot all season, sometimes a roster could use a change. If your kicker has been missing kicks or just generally not producing, Saints kicker Brian Johnson has yet to miss. It’s only been 3 weeks but he’s averaging 9 PPG and has kicked 2+ field goals in each game.