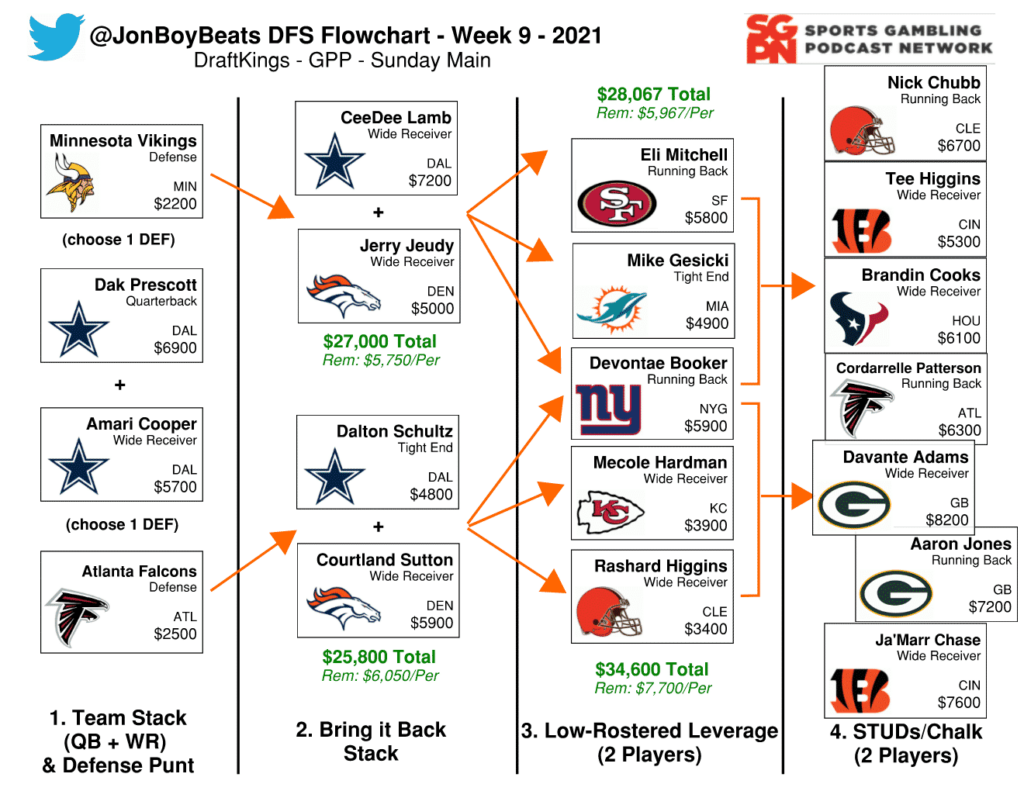 EDIT: SUNDAY MORNING UPDATE – With Donovan Peoples-Jones expected to play, you simply cannot play Rashard Higgins. There’s actually around $1k left in some of those lineups so you can get up to DPJ. I also don’t love Eli Mitchell now that he may be limited so I would go to Myles Gaskin in Gesicki/Cooks lineups (chalky) or go to Josh Jacobs if you can find the $400.

What a result we had in Week 8! The bottom pathway of the flowchart proved to be the stone nuts last weekend. I heard back from plenty of people who were winning contests after the morning games. A lot of us had to sweat out late-game theatrics from Tom Brady theatrics to hold on to big cashes in the GPPs. I had a couple of the larger contests surrounded last week. Unfortunately, I wasn’t able to take any of them down, but I landed two lineups in the Top 10 of both the $4 Front Four (20 max) and the $2 Safety (20 Max). It was my biggest NFL win to date, and I was very happy to see a lot of people partaking in the profits!

Since I try my best to not purely be a guy giving out DFS picks, I want to spend some time this week talking about the psychological mistakes we can make after a big win. The obvious one is becoming overconfident and thinking you are the best player in the world. Simply look back at our results from Week 7 to see how quickly things can fall back down to earth.

Another big mistake people will make is immediately jumping up in stakes. Let’s say for instance you have been playing the $15 Screen Pass (3 Max) all season and you just hit it big. You may be inclined to jump up and try out the $75 Goal Line or the $150 Power Sweep. The competition is not only a lot sharper at these mid-tier stakes, but the field sizes shrink a lot. This makes the strategy change quite a bit as well. If you decide to move up in stakes, just know what you are up against. It’s not the worst idea to just keep playing the same contests and be satisfied knowing that the rest of your season entries are almost paid for. On to Week 9!

There really is nothing better than an overlooked Cowboys double stack. Dak Prescott is coming back from injury, which will scare some people off. The fact that they were so cautious last week makes me optimistic about him in Week 9. There is a real possibility that he is the 7th or 8th more rostered QB this weekend and that just ain’t right! Amari Cooper is woefully underpriced this week at $5700 and he will likely be one of the most popular receivers come Sunday morning. We are going to eat the chalk at the start of every lineup here and find ways to be different elsewhere.

The second options for the Cowboys stack are both in really good spots. CeeDee Lamb is just a baller and all you have to do is look back to Week 8 when Cooper Rush was slinging the rock to see a game when Cooper and Lamb both got there. Blake Jarwin is on the shelf this week, so Dalton Schultz is projecting at a really good play. Schultz has some good splits with Dak this season and now he has less competition. Weird that he isn’t getting more buzz.

You have to admit that this feels like a really fun GPP week. I will definitely be making a ton of different lineups, and I would encourage you to do the same. You will be able to figure out some of my other favorite game stacks just by seeing some of the secondary correlations included later in the flowchart.

You will notice that I went for a full fade of Ezekiel Elliott on the Dallas side. I’m not as comfortable taking an onslaught approach as we have in recent weeks when the salaries are so high. The expected roster utilization is also high with Zeke + Cooper, so I would advise against that. Speaking of chalk, Noah Fant is out this week so Albert Okwuegbunam is one of the most popular guys on the slate. We are already eating the Cooper chalk early, so I am choosing to leverage against him with my Broncos options.

Jerry Jeudy has been a guy that I was very high on coming into the season, so I am glad to see him back healthy. I purposefully didn’t play him last week, because I get a bit nervous of guys immediately coming off of high ankle sprains. He didn’t have a re-injury, so looks good to go in Week 9. Courtland Sutton has been an Air Yards monster this season, and I am banking on Teddy Bridgewater having to air it out to his receivers against the Cowboys. Sutton could be in for a big day.

It’s felt like we have been getting away from the direct leverage plays recently, which I attribute mostly to how different we have been getting in the game stacks. This week we are a little bit chalky in the stack, so leverage becomes more important. Rashard Higgins is great leverage off of Jarvis Landry, and at $3,400 he carries a lot less risk in this ever-evolving Browns offense. He pairs up nicely with some of the Bengals options in the Studs column. Mecole Hardman is great leverage off of a popular Tyreek Hill. Usually, I don’t love Hardman, but this week he is really popping in my projections, so I’ll lean into it at $3900. I will most definitely be firing up some Chiefs’ double stacks this week since everyone will be scared off of it.

We’ve been hitting pretty well on the low-to-mid-tier running backs lately and this week Devontae Booker and Eli Mitchell are my guys this week. I’ll be honest with you, the RB position doesn’t feel very strong this week, so I would advise only playing two in your lineups. Booker and Mitchell are both getting incredible workloads in their offenses, and at their prices, that’s all we need to move the needle. Mike Gesicki is a leverage play because he’s actually a wide receiver, not a tight end. Anytime you can get five receivers in your lineup you have to do it. All joking aside, Gesicki will be popular this week so he isn’t leverage, he just fits well in this spot.

I really like when the flowchart finishes like it does this week because it provides a ton of options! Pairing up Ja’Marr Chase with Higgins or Davante Adams with Hardman are awesome secondary stacks that give you access to elite WRs. If you want to get really hectic, you can do MVS and Tyreek Hill as correlation and still get access to that GB/KC game. I don’t love Aaron Jones as much as I do Adams this week, but there are a few different combinations where Jones’ salary fits well.

Cordarrelle Patterson and Nick Chubb fill out our small running back player pool this week. Patterson might get pretty slept on, but all signs are pointing to him having an increased workload lately. We love his efficiency, so when the opportunity is there it’s a home run. Chubb has the ability to go kaboom this week, and contrary to popular belief his style of rushing supports pairing him with Bengals receivers. Tee Higgins or Chase are great options because when Chubb gets there it’s usually through long runs that force the other team to start passing the ball more.

Good luck this week everyone! I hope to see you at the top of the leaderboards again.