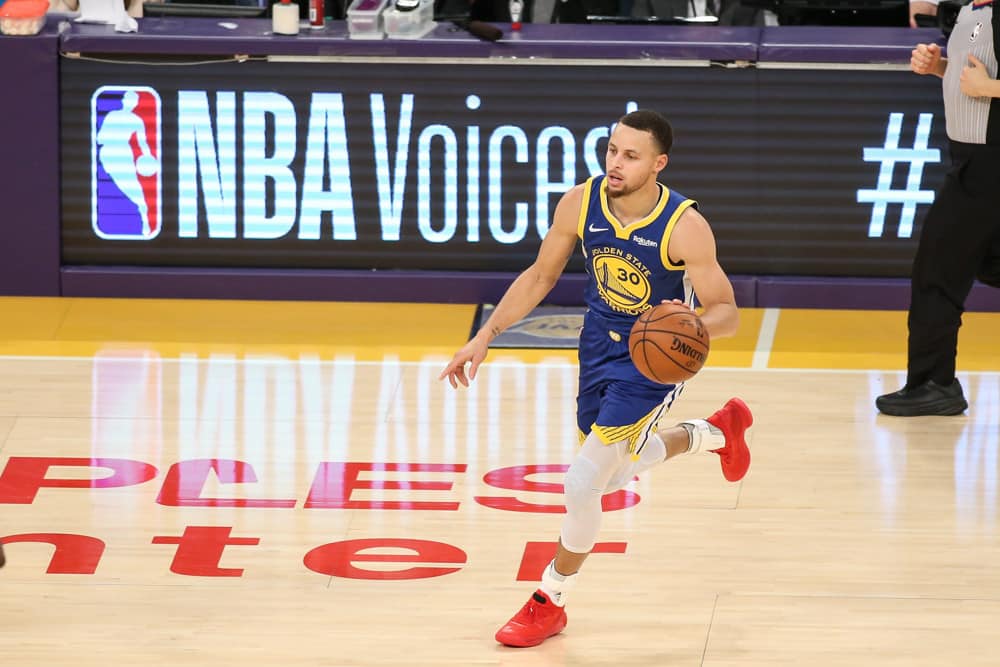 Every year Steph Curry is in the conversation for the MVP award, and rightfully so. I am personally high on this Warriors team and coming into this season it starts and ends with Curry.  The Warriors will not be getting Klay Thompson back on the court until the new year. However, I love the offseason moves made by the Warriors. Additionally, Curry is a threat every year to lead the league in scoring. Furthermore, nine of the last ten MVPs led the league in Player Efficiency Rating (PER), a stat Curry always excels in. The Western Conference is wide open this year in my opinion and I believe Curry can lead the Warriors to a top-three seed in the West.

This is insane value for a player who was in the conversation for MVP when he playing for the Houston Rockets. James Harden on any given night can go out and record a triple-double for the Nets. The future of Kyrie Irving is unclear due to the vaccine mandate in New York. As a result, Harden will take on the duties of being the featured point guard for this team and is a threat every year to not only average 25+ points per game but also lead the league in assists. At 20/1 for the type of capabilities Harden has is good value.

Let’s not kid ourselves, for all the slander Gobert takes he is still the best defensive player in the league. In fact, he has won the award three out of the last four years. The rim protection that Rudy Gobert provides for the Utah Jazz is invaluable. In fact, Gobert is always on top of the leaderboard in blocks per game and defensive rebounds per game. This award usually goes to the “chalk” and I can’t ignore Gobert’s accolades.

I believe the Miami Heat will be the best defensive team in the league this year. And why not? They have a bunch of dogs on this roster led by Jimmy Butler. Every night Butler guards the opposing team’s best player. Furthermore, Jimmy Butler is always one of the leaders in steals per game. At 50/1 I love this price for a guy like Butler.

Sixth Man of the Year

I love the addition of Patty Mills to the Nets. I have said time and time again this was one of the best offseason acquisitions of the summer. Patty Mills brings the veteran presence, championship pedigree, and high IQ to this Nets team. In fact, if Irving misses significant time during the season, Mills is a great pick to fill that void. Mills should be the first one off the bench for the Nets and for the ability that Mills has I love this bet at 15/1.

Last year was the coming-out party for Jordan Poole. He significantly improved over the course of the season and provided the extra scoring punch the Warriors needed in the absence of Klay Thompson. Poole had a great preseason and I am confident he is going to be a significant contributor and lead the second unit for the Warriors. Don’t be surprised if you see Jordan Poole in the clutch moments down the stretch for the Warriors.

Coach of the Year

When I dug into past winners of this award, two things stuck out. First, the overall improvement year over year for the winning coach’s team was 10 wins. Next, every single winner guided their team to a playoff appearance. There are a few teams that stuck out to me that can make this improvement.

Last year the Boston Celtics did not live up to expectations based on the amount of talent they had on the roster. Also, it started to seem that the system Brad Stevens wanted to implement was not working, so a “change” was made to the head coaching position. Insert Ime Udoka. Udoka takes over a talented roster led by their superstar Jayson Tatum and All-Star Jaylen Brown. The Celtics made other additions to this roster like Dennis Schroder and former player Al Horford. A breath of fresh air and an offensive system to bring out the best gives Ime Udoka a good chance to win this award.

O.G Anunoby has a great chance to take the next leap for the Toronto Raptors. Pascal Siakam will not be ready to start the season as he is dealing with a shoulder injury. Also, Kyle Lowry is not on this team anymore and that opens the door for Anunoby. Furthermore, Anunoby has increased his points per game average over the first four seasons of his career. There is a great possibility that Anunoby can average 20 points per game for the Raptors.

Rookie of the Year

This is a bit of a homer pick, but I believe Jalen Green is the next superstar for the Houston Rockets. James Harden left a huge hole in the Rockets roster, especially in the scoring department. In the first few games of the NBA Summer League, Green looked like a player who could easily average 20+ points per game in his rookie year for the Rockets. The Rookie of the Year of the award is simply based on personal stats. I believe this is going to be a big year for Jalen Green as he becomes the next face of the franchise for the Houston Rockets.  This is one of my favorite NBA Regular Season Awards prop bets!