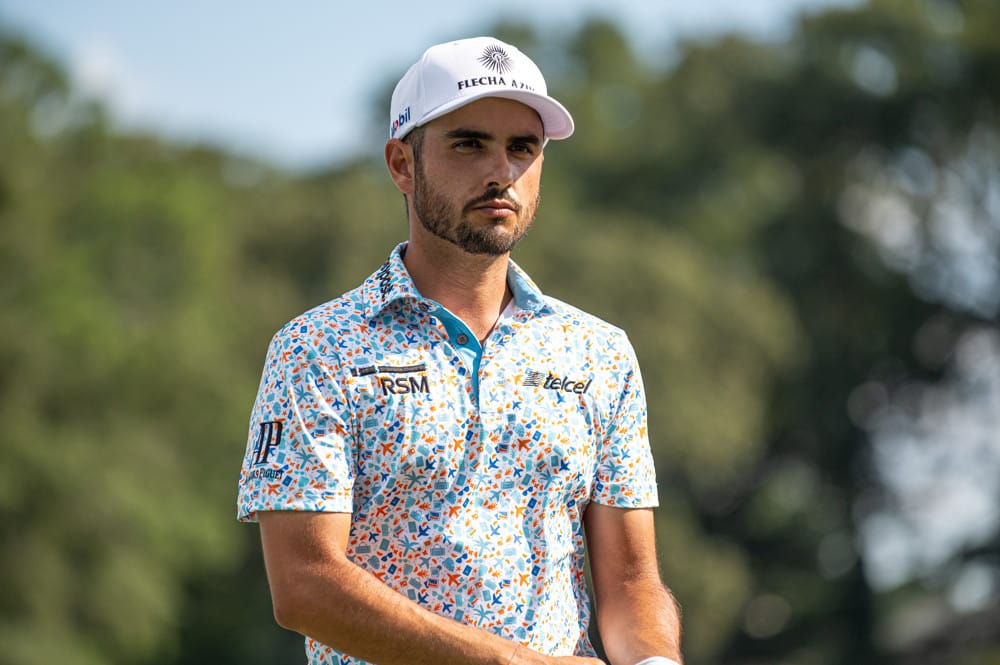 It doesn’t appear that the weather will play a big role this week at the Shriners Children’s Open. There might be some wind on Friday, but otherwise playing conditions in Las Vegas will be like playing in a dome. Once again, the winning score at the Shriners should eclipse -20. For outrights this week, the gambit is to target players who can reach or exceed this ceiling over four rounds.

Abraham Ancer is that type of player. Not only is he a great course fit for TPC Summerlin, but he’s also more than capable of posting low enough scores to hang towards the top of the leaderboard. That’s due to a great combination of elite iron play and putting, particularly on bentgrass surfaces. Ancer piles on birdies while also having the consistency to avoid crippling bogeys. He’s a popular pick this week, but the attention is warranted. And at 22/1, he should be a pick to win the Shriners Children’s Open.

Like Ancer, Webb Simpson is another type of player more than capable of going nuclear for four days. TPC Summerlin is one of Webb’s best golf courses because it plays to his strengths. On golf courses where he frequently hits short to mid irons from the fairway into receptive greens, Webb excels. Places like Sedgefield Country Club, Sea Island, and Detroit Golf Club all feature similar field averages in fairways and greens in regulation rates that TPC Summerlin does. And like TPC Summerlin, they also feature similar approach shot distances into greens. It’s no surprise then that Webb crushes at all four venues. Typically when Webb goes to one of his tracks he’s priced in the mid-teens. Getting him at 25/1 is a great price at one of his best golf courses.

Patrick Reed is certainly not the statistical darling. He hasn’t shown any form since a 5th place finish at the Memorial. His ball-striking numbers since then have been garbage. He’s played only 12 rounds since August 1st. There’s an unknown if he’s fully recovered since his medical scare after the WGC FedEx St. Jude Invitational. And he showed very little at his last appearance at the Tour Championship.

Things change quickly in golf. A month off is an eternity to turn things around. Maybe Patrick Reed’s self-perceived snub off the Ryder Cup team sharpened his focus to clean up some of his faults. Maybe he comes out storming at TPC Summerlin to prove a point. And Patrick Reed is exactly the type of volatile, explosive, high ceiling golfer one should target pre-tournament this week. And he has by far the highest win equity of everyone priced around him this week.

At his best, Patrick Reed is dangerous with a mid or short iron in hand and can hit every putt under the sun. That’s the recipe to success at TPC Summerlin. If peak Patrick Reed shows up this week, 40/1 is a steal.

Matthew Wolff seems to be back in a good spot. He recently switched back to the set of irons he used to finish runner up at the US Open and the Shriners Children’s Open last fall. He also has worked with his coach and swing guru George Gankas to work out some ball-striking kinks. That paid immediate dividends last week at the Sanderson Farms Championship. Wolff gained 1.43 strokes per round tee-to-green at the Country Club of Jackson. Those are the numbers we expect out of Wolff.

Riding with some confidence, Wolff returns to the golf course where he lost in a playoff to Martin Laird in 2020. 45/1 isn’t the most appealing price for Wolff this week. But it’s not bad. And for Wolff’s ceiling and seemingly with his game back, he’s worth a bet.

2021 was disastrous for Rickie Fowler. He only had one Top 10 during the 2021-2022 season. The swing changes he attempted to make weren’t producing results. And needing a good result at the Wyndham Championship to make it into the FedEx Cup playoffs, Fowler wasn’t competitive. Nothing Rickie has shown this year suggests he’s worthy of betting.

But hear me out.

All of these struggles took place two months ago. And as mentioned earlier, things change very quickly on the PGA Tour. While we might know what brand activations Fowler is up to, we have absolutely no idea what the state of his game is. It’s entirely possible that over the last two months things finally clicked. If so, Fowler absolutely has the high ceiling needed to contend for the win. And TPC Summerlin is a great golf course for the type of player we expect him to be. At his best, he’s a very good player with the mid to short irons and has a high ceiling putting performances in his arsenal.

If the Rickie Fowler of old comes back, he is by far superior to anyone priced around him on the betting board. He’s worth a flyer at 100/1 to see if the magic is back.

A few months back, Will Zalatoris sought the services of his golf coach to try and figure out why he was putting so poorly. It turned out he had been using a putter with a caved-in face for months. After this discovery, Zalatoris’ putting performances has greatly improved. And when matched with his all-world ball striking, the sky is the limit for him. I doubt he has the ceiling to reach a winning score of low 20’s under par. But +275 for another Top 10 finish is a good bet.

Other Top 10 Props To Consider

After blowing the Wyndham Championship, Henley was very lackluster in the FedEx Cup playoffs. But with over a month to move on from the heartbreak, Henley is back on a golf course that fits his game. The short hitting Henley gets the benefit of playing at altitude and on a firm golf course to max out his driving distances. That’ll give him plenty of chances to fire into receptive greens with mid and short irons. That’s where Henley shines best. He probably doesn’t have a good enough putter to contend for a win. But a return to the Top 20 is a decent bet for Henley at the Shriners Children’s Open.

Other Top 20 Props To Consider

Erik Van Rooyen ran incredibly hot during the FedEx Cup playoffs. A lot of that had to do with really hot putting. Historically, Van Rooyen is not a strong putter. And on golf courses that aren’t quite as demanding tee-to-green he doesn’t have as big of an edge on the field as he does on more demanding ones.

He’s matched up against a more polished Adam Scott, who has played fantastic golf over the last few months. Adam Scott lost in a playoff at Wyndham and hit the ball great at the BMW PGA Championship at Wentworth. That week, Adam Scott gained 7.7 strokes with his ball-striking. And what once was a weakness, Adam Scott has really improved with his putting. He should best Erik Van Rooyen at the Shriners.

The praise for Webb Simpson is above. As for Louis Oosthuizen, he looked gassed towards the end of last season. And while he’s had a month off to recover, birdie fests that break out at TPC Summerlin aren’t really his specialty. While Oosthuizen finished T19 in last year’s Shriners, he needed a final round 64 to do so. Otherwise, he was a complete non-factor all week. Webb Simpson should beat Louis straight up.

The praise for Abraham Ancer is above. As for Scottie Scheffler, he’s getting a ton of buzz after a stellar Ryder Cup performance. But something just doesn’t feel right about him this week. Maybe it’s because some of his advantages as a great long iron player aren’t as important at TPC Summerlin. Or maybe it’s his inability to putt well historically on bentgrass greens. Or that it seems like anytime Scheffler has a big-time performance with lots of eyes on him, he falters in his next start. Regardless of what it is, Scheffler might disappoint all his backers this week. Pick Ancer to beat Scheffler at the Shriners Children’s Open.