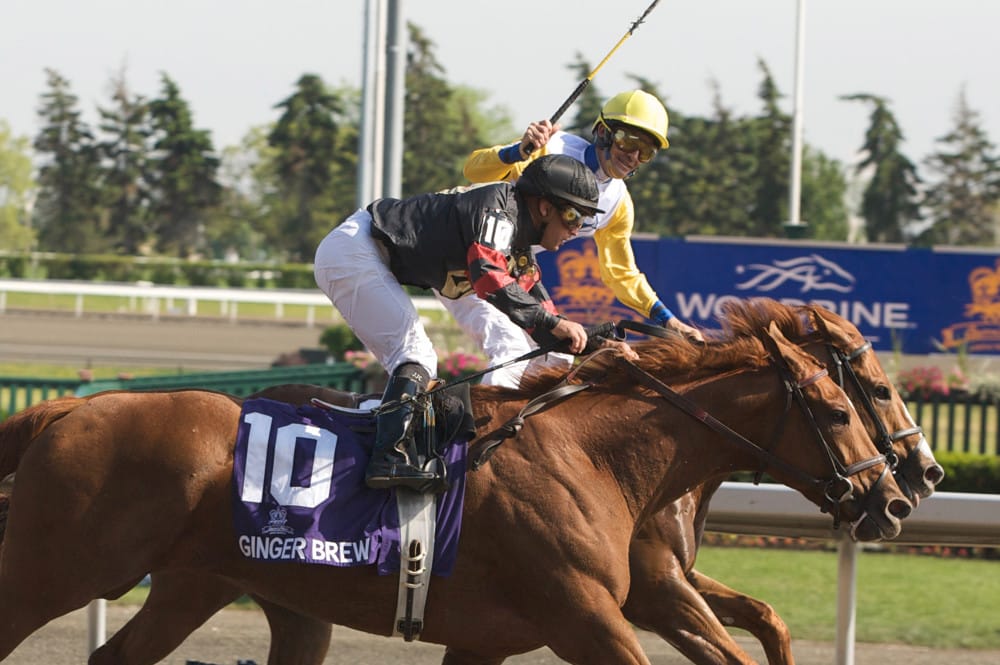 Saturday sees a good-looking card at Woodbine in Canada. Three graded races stakes races will take place. I’ve been in good form on the ponies so let’s back it up here.

Raging Bull – 2/1. Frankie Dettori takes the ride for Chad Brown on the favorite. He has ran well this season but always gives you the impression however that he’s vulnerable in a field of this quality. Traveled smoothly at Keeneland before not finding much. I wouldn’t want to be taking a short price that he wins today.

Set Piece – 5/2. Won the Wise Dan Stakes two starts ago. A genuine closer who looks to have the beating of Raging Bull. He’ll need to get a jump on some of the others around him and I think his lack of tactical speed can find him out.

Ride a Comet – 5/1. Two for two on this turf course having returned from injury. A closer who finished third in the Wise Dan Stakes last time. He came wide that day and with a better trip, I rate him a real danger.

March to the Arch – 8/1. A closer who needs things to fall right. Was behind Olympic Runner last time and I think that happens again.

Olympic Runner – 10/1. Wore down Town Cruise at this track last time. A pretty straightforward performer who I think will run into the money.

Space Traveller – 12/1. One of my favorite British jockeys Danny Tudhope takes the ride here. Needs a decent pace to aim at, which I think he gets. Live chance for shrewd connections.

Avies Flatter – 15/1. Beat Olympic Runner over seven furlongs in the Connaught Cup, which on paper gives him a chance here. Everything went his way that day and I think that was his career-best.

Duke of Hazzard –15/1. A Group 2 winner in England, but that was over two years ago. Smart performer but a lack of recent form. As a result, I’m happy to maintain a watching brief for now.

Change of Control – 20/1. Michelle Lavelle has placed this horse very shrewdly this season. A six-furlong winner, she’s up in class and trip. Look out for her next time.

Town Cruise – 20/1. A confirmed front-runner who won’t have the class to win this.

Ride a Comet will be positioned slightly in advance of the deep closers and I think that could be crucial as this develops into a sprint. Olympic Runner is straightforward and will run his race. Space Traveller looks more suited by this trip and I think connections have found him a nice opportunity.

Walton Street – 8/5. Charlie Appleby trains this European raider and has been plundering North American races with horses like this all year. His run in the Sheema Classic is solid form. He can stalk the pace and scoot away to win.

Desert Encounter – 3/1. Tries to notch a hat-trick of wins in this race after winning in 2018 and 2019. A missed year due to Covid might prove the undoing of this bid as the horse tackles younger rivals.

Corelli – 4/1. Extricated himself from a hole to win the Singspiel over this track last time. Nice performer but this is a step up.

Bluegrass Parkway 10/1 – Came from the clouds to win at Ellis Park. Up in class and, I think, overfaced.

Let’s keep this simple. Walton Street looks the pick. He has the form in the book and connections are making a habit of winning prizes similar to this.

A field of five goes to post here in an intriguing contest. There’s no obvious frontrunner which leads to all sorts of possibilities for an enterprising jockey.

Merveilleux (8/5) can take a while to pick up and that is a red flag for me here in what I think is a slowly run race. By the time he gets organized the bird may have flown.

La Dragontea (9/5) has won from the front but dropped in last time at Saratoga and won from there too. Looks on the upgrade.

Our Secret Agent (9/2) could be the one who is forced to the front. However, if Antonio Gallardo gets the fractions right he might be tough to pass.

Court Return (7/2) ran ok last time but was caught out by how the race developed. Similar today.

Barkin (12/1) consistent filly who goes better the further they send her. Admirable, but not winning.

La Dragontea is improving with racing and Joel Rosario seems to really like this horse. Our Secret Agent could make this tough from the front and will be the one that is the chief danger to our pick.