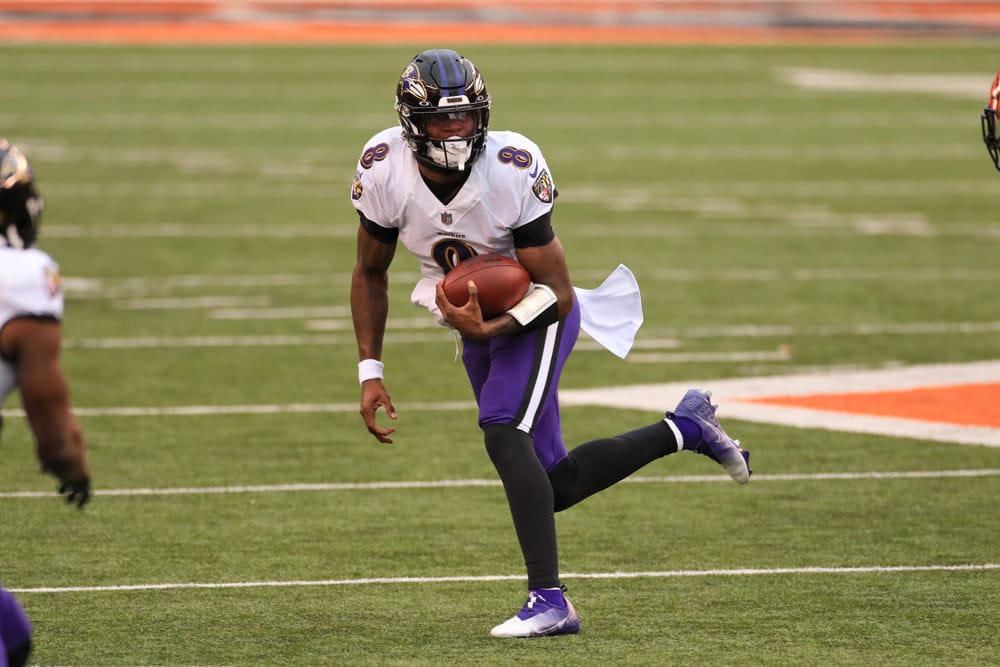 The 2020 season for the Baltimore Ravens was a tale of two halves. Prior to their bye week, the Ravens were 5-1. After their bye week, the Ravens lost three out the next four games, only to go on and finish the season winning five straight games, securing a wild card spot in the playoffs. The season ended for the Ravens in the AFC Divisional Round against the Buffalo Bills. However, it was a great year for Lamar Jackson, who threw for 26 touchdown passes and rushed for over 1,000 yards.

Headed into the offseason the Ravens’ biggest question was the lack of passing game and if we would see Lamar Jackson take the next step as a passing quarterback. In fact, over the last two years, the Ravens have not had a wide receiver or tight end have a 1,000-yard receiving season.

The biggest story heading into the new season is the loss of J.K Dobbins for the season to a torn ACL. However, the Ravens have a more than capable backup in Gus Edwards to step in. As I mentioned above, we all want to see Lamar Jackson’s passing game take the next step. The Ravens drafted wide receiver Rashod Bateman to bolster the receiving group. However, Bateman will start the season on the injured reserve because of a groin injury. Furthermore, the Ravens lost a few key pieces from last season including names like Orlando Brown, Matt Judon, Mark Ingram, and Yannick Ngakoue. Will the Ravens have what it takes to compensate for the losses to injuries and the offseason?

It is going to be difficult to gauge this Ravens team because of a couple of reasons. As I mentioned above, they lost J.K Dobbins for the season but that is the area I am not concerned with. The passing game is going to be a big question. In 2019, the Ravens offensive DVOA was ranked #1 and fell to #11 last season. On top of that, the home schedule is not easy. However, Lamar Jackson in his career is 30-7 as a starter and the Ravens find ways to win games. The division is tougher than it seems – the Browns are improving year over year and you can not count out the Pittsburgh Steelers.

Prior to Dobbins’s injury, Gus Edwards’s rushing total was 650.5. Now, we are sitting at 1000.5. Edwards has been great in his entire career thus far. He has rushed for at least 700 yards in all three seasons. Now, he will be the featured back for the Ravens. Furthermore, Gus Edwards averages 5.2 yards per carry! I love Gus Edwards to have a big year this season for the Ravens.

This should be a big season for Mark Andrews from a statistical standpoint. The injuries the Ravens suffered to the skill position players should open up opportunities for Mark Andrews. If we are going to see strides in the passing game for the Ravens, Lamar Jackson is going to have to go to a player that has been in the system and he has a rapport with, and Andrews fits that criteria.

One of the more overrated players on the Ravens roster is none other than Marquise “Hollywood” Brown. SGPN’S Fantasy Football writer highlights this in his article Most Overrated Fantasy Football Player On Each Team. Marquise Browns has not sniffed a 60 reception season nor exceeding 800 receiving yards. A large part may be due to the lack of passing game but I can not draft this player to be on my roster.

As I mentioned above, Gus Edwards will fill in nicely for the Baltimore Ravens. He is primed for at least a 1,000 rushing season and for a big rushing touchdown season. He is averaging 5.2 yards per carry and will be a big part of the running game for the Ravens.