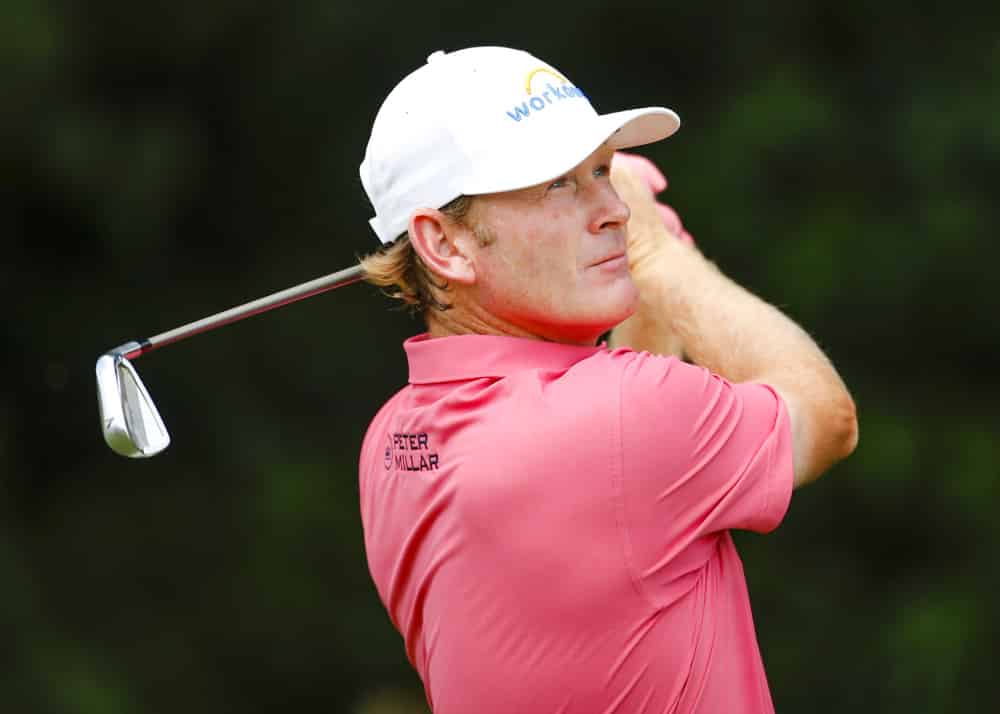 For those who missed it, check out the Palmetto Championship at Congaree Preview and Betting Strategies for the types of golfers you should look to target for your picks. Using that as a guide, let’s take a look at some of the best bets to make this week. Here are my 2021 Palmetto Championship at Congaree Picks (odds courtesy of PointsBet and DraftKings *Promo Code SGP*).

It’s been very frustrating to be on a Sungjae Im ticket this year. At times he’s shown high ceilings and sniffed the tops of leaderboards. Then things go sideways as he cards a round in the high 70’s and exits Stage Left.

Sungjae has a few things going his way this week. He seems to be overlooked by bettors and is not a popular pick this week. Sungjae Im is very comfortable on Bermuda golf courses. While the strokes gained metrics don’t indicate it, he’s one of the more consistent players tee-to-green in the game. He’s also an excellent scrambler. And Sungjae Im has a good track record on golf courses that feature high rates of fairways hit across the field.

But what puts the cherry on top of the sundae is his experience at the 2019 Presidents Cup at Royal Melbourne. Congaree Golf Club borrowed many concepts from Royal Melbourne and similar Australian sand belt tracks. Captain Ernie Els received rave reviews for his team’s preparation for Royal Melbourne. He did a wonderful job teaching them how to navigate the tricky firm and fast golf course so well that the Internationals nearly upset the heavily favorited Americans. That week, Sungjae Im became a breakout star. He went 3-1-1 and absolutely waxed Gary Woodland in Sunday Singles.

Using his knowledge and experience from Royal Melbourne, he can translate that to a style of golf course many in the field don’t see often. He may finally reward those who have picked him over and over with a win at the Palmetto Championship at Congaree.

After a prolonged slump, Brandt Snedeker is back to playing solid golf. He has three Top 20 finishes in his last five starts and has seen an improvement in his statistics tee-to-green. He’s a wonderful scrambler and putter on Bermuda. He carded Top 10’s at the 2014, 2015, and 2017 U.S. Opens at Pinehurst, Chambers Bay, and Erin Hills, respectively. Congaree Golf Club has similar features to all of these.

He also should have some additional motivation behind him. Snedeker failed to get out of his Sectionals on Monday and will not play the U.S. Open for the first time since 2012. What stings is this year’s U.S. Open is at Torrey Pines, a place where he’s won twice. That has to gnaw on him a bit. Maybe he’ll come out wanting to ensure he doesn’t put himself in a situation where he’ll be fighting for a U.S. Open spot in Monday Sectionals next year.

With such a weak field, grabbing a player with as much win equity that Brandt Snedeker has at 55/1 is a good deal. He’s a solid pick this week to win the Palmetto Championship at Congaree.

Betting Sungjae Im to win because of his participation in the 2019 Presidents Cup is a decent lean. But guess who else in the field was on that team? C.T. Pan. And he played well in his own right that competition too. Paired with Hideki Matsuyama, C.T. Pan won both of his fourball matches before losing to Patrick Reed in Sunday singles. And like Sungjae, C.T. Pan had it hammered into his head how to attack Royal Melbourne. It clearly paid dividends.

C.T. Pan also checks a few boxes of what bettors should target this week. C.T. Pan has a good history on golf courses where the field hits fairways at high rates. He’s also fairly solid in most tee-to-green metrics and has hit the ball off the tee quite well lately. And he’s an above-average putter on Bermuda.

With his current form and familiarity with the style of Congaree, he could be in line for his second career win on the PGA Tour.

Brice Garnett is a former winner at Corales Golf Club, a Tom Fazio design. Like Congaree, it’s over 7,600 yards long, features wide fairways and tight lies around the green. Brice Garnett is a consistent and accurate player tee-to-green, a solid scrambler, and a very adept putter on Bermuda. For 150/1, you can pick a lot worse than Brice Garnett to win the Palmetto Championship at Congaree.

One of our only Australians in the field this week takes on a track that should look familiar to him. Percy has a great deal of experience playing professionally in Australia and on similar tracks. He has many good finishes at the Australian Open, Masters and PGA Championship in his career. Of anyone in the field, he’s the most familiar with this style of golf course. He’s a decent sleeper pick to win the Palmetto Championship at Congaree.

There is a pattern to Tommy Fleetwood‘s 2021 season. He shows great form one week or tournament before a big event when he’s largely ignored by bettors. Then spectacularly disappoints once everyone has their hopes up for him. This year, he Top 10’d at the Arnold Palmer Invitational before missing the cut at the Players Championship. Next, he finished T5 at the WGC Match Play before having a disappointing T46 finish at the Masters. Then he finished T14 at Quail Hollow before missing the cut at the PGA Championship.

Here we are once again with Tommy. He’s not a popular pick in DraftKings nor the betting market. He’s also at a golf course where he should farewell. Fleetwood has a long list of good finishes on firm and fast golf courses like Congaree. It is absolutely in his arsenal to go out against a weak field, card a Top 10, get everyone excited about him for the U.S. Open, and then let everyone down next week. Expect to see that play out once again over the next 10 days.

Other Top 10’s to Consider:

Many competitors chose to play grueling Monday qualifiers for the U.S. Open. Pat Perez did not. Instead, he should be well-rested on a golf course that might suit his game. Perez has struck the ball well tee-to-green lately and is a good putter on Bermuda. He also has a good history in weaker fields with high fairway hit percentages. He’s also a very good scrambler and can navigate the tricky green surrounds at Congaree quite well. He’s a solid pick for a Top 20 finish at the Palmetto Championship at Congaree.

Other Top 20’s to Consider:

Not only is Dustin Johnson not in good form, but he might not have his heart totally in this event. According to Lucas Glover, he had to convince Dustin Johnson how much the state of South Carolina would mean if he showed up to play. No offense to Dustin Johnson, but catering to home crowds don’t seem to ever be a priority for him. He’s mostly concerned with winning big-money events and major championships. And with one right around the corner and on the opposite coast, he might not last long here.

Meanwhile, Brooks Koepka will take this tournament seriously as he uses it as a dress rehearsal for an upcoming major. The firm, fast, long, and tough Congaree is a great place for him to fine-tune his game. Brooks Koepka should finish better than Dustin Johnson at the Palmetto Championship.

Weather delays caused the U.S. Open sectional qualifying in Columbus, OH to bleed into Tuesday. On Tuesday morning, Jhonattan Vegas played his way into a playoff for one of the final remaining slots in the U.S. Open. He did just that, and he’ll make the trip to Torrey Pines next week. With that pressure off of him and possibly a bit fatigued, he might not see the Palmetto Championship as all that important.

Meanwhile, Harold Varner III should want to take this tournament seriously because of his local roots. He also has struck the ball well tee-to-green and has a good history on similar types of tracks. He should beat Jhonattan Vegas head to head this week.