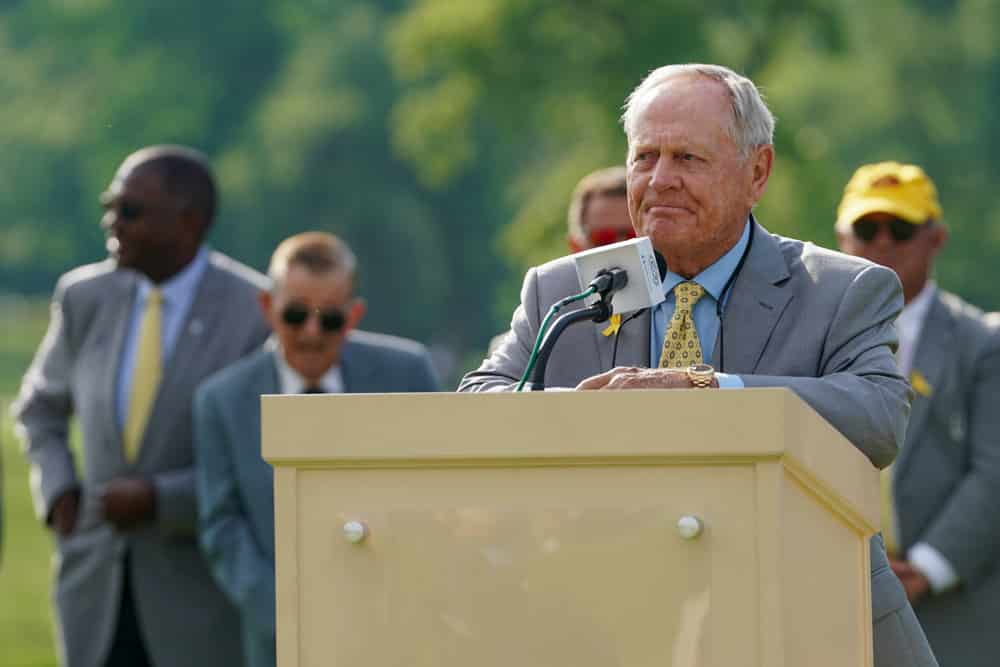 A top-notch field takes on one of the most storied events in all of golf. The PGA Tour heads back to Muirfield Village for the Memorial Tournament in Dublin, OH.  As always, here is your early deep-dive on the Memorial and a preview for how to bet.

The Memorial Tournament Preview – The Field

Highlighting the field is defending champion Jon Rahm. Rahm blew away the field over the weekend to capture his 5th PGA Tour title at last year’s Memorial. Recently, Rahm has gotten off to slow starts of tournaments before backdooring a Top 10 with a strong Sunday finish. He’ll look to put together four full rounds to defend his title.

Also highlighting the field is Bryson DeChambeau. Bryson famously bombed out of last year’s tournament by taking a 10 on the Par 5 15th Hole. You can also bet the media will be in a feeding frenzy to ask him about his continued feud with Brooks Koepka. Besides last year’s meltdown, however, Bryson is a former champion of this event. If he stays focused, he has the game to win again.

Following his win at Muirfield at the 1966 Open Championship to complete his career grand slam, Jack Nicklaus purchased a tract of land in Dublin, OH, which is a suburb of his hometown of Columbus, OH. He sought to build a golf community to highlight his career achievements in golf and named it “Muirfield Village”.

Though the land was purchased in 1966, the golf courses on the property were not opened until 1974. The community also began selling houses to the public surrounding the golf course, and many big names reside in the village such as Jason Day, Urban Meyer, and several prominent members of the Columbus Blue Jackets.

As far as the conditioning of Muirfield Village Golf Club itself, there are few golf courses more well maintained that are played on the PGA Tour. Jack Nicklaus wanted to create pristine conditions similar to that of Augusta National. Under optimal tournament conditions, the golf course has lush Kentucky bluegrass and ryegrass rough, bentgrass and poa fairways, and fast bentgrass greens.

For more detail about the layout of the golf course, including holes that are close replicas to Augusta National, click here.

It is much more important to discuss the recent changes to Muirfield Village. Shortly after completion of the 2020 Memorial, Jack ripped up the golf course in order to give it a facelift. In April, all the players and caddies were sent a memo summarizing all the changes to the golf course. Here are the notable highlights:

1. All the greens were resurfaced with bentgrass. It is no longer a bentgrass/poa mix. In addition, each green had a sub-air system installed below the green surfaces for moisture control.

3. New tee-boxes added approximately 100 yards of distance to the scorecard. The total yardage of Muirfield Village from the championship tees is about 7,500 yards.

4. All fairway and greenside bunkers were completely rebuilt and shifted.

While the routing of the golf course remains the same, the positions of both greens and fairways are not. Many holes pushed out and recontoured the fairway bunkers to shrink the landing zone off the tee. Jack Nicklaus has ripped the governing bodies for not doing anything to control exploding distances in golf. Since they appear to have little interest in doing anything about it, this is his response. In addition, several greens were shifted closer to ponds and creeks to bring them more in play. This was done on Hole 3, 5, 9, and 15.

In addition, Hole No. 15 had the most changes. The par 5 used to see players play up to an elevated fairway off the tee, then downhill to the green. Jack lowered the fairway 10-15 feet to level out the hole. While the hole now plays shorter, he added new bunkers 285-320 yards off the tee to ensure players will need a good drive if they hope to hit the green in 2.

The first question one might have is will these extensive renovations change how bettors view this tournament. Will it now give one particular type of player an edge that it didn’t have before? Without looking at the aerial pictures or seeing it firsthand, I don’t think it will. Muirfield Village was already a tough driving golf course. While previously over 7,400 yards long, golfers would often club down due to the positions of doglegs and bunkers. Now with new fairway bunkers pushed out further, I expect the longer hitters might have to club down even more. Meanwhile, shorter and more accurate players off the tee might be able to hit driver more often because the bunkers no longer are in their landing zone.

But other than that, the attributes needed to win Muirfield Village likely haven’t changed. A player who has a solid combination of length and accuracy off the tee has an edge from the jump. Players who demonstrate solid abilities with their irons will excel. The greens remain approximately 5,000 sq. feet per hole, which is on the smaller side of the PGA Tour. That could mean more missed greens and a necessity to get up and down for par. And while the greens are now pure bentgrass, they will still run lightning quick. Expect green speeds to remain between 13-14 on the stimpmeter.

So how does Muirfield Village typically play? Since 2015, driving accuracy rates are fairly high at Muirfield Village. The average percentage of fairways hit for those who made the cut since 2015 is about 65%. This percentage, however, is dependent on weather. In years of windy conditions (such as 2020), fairways are much more difficult to hit. But in calmer conditions, the driving accuracy % for the week usually is around 70%. This is primarily because of players opting for less than driver off the tee. As of today, the wind does not look to be a significant factor in the tournament. Expect players to hit the fairway at an above-average clip.

Lastly, there’s continued debate about if lightning-fast greens either favors better putters or levels the playing field overall for that skill set. In my opinion, faster greens level the playing field. Players have to putt defensively on very fast greens, especially on downhill putts. It’s much more important for one to have strong command with their irons to ensure they’re on the optimal level of the green to putt on, or below the hole to give oneself an easier uphill putt. It’s no wonder players like Collin Morikawa, Hideki Matsuyama, and Jason Dufner, all of whom are elite ball-strikers with shaky putters, have called themselves champions at Muirfield Village.

This description is encapsulated in the Muirfield Village relative skill set chart provided by DataGolf: 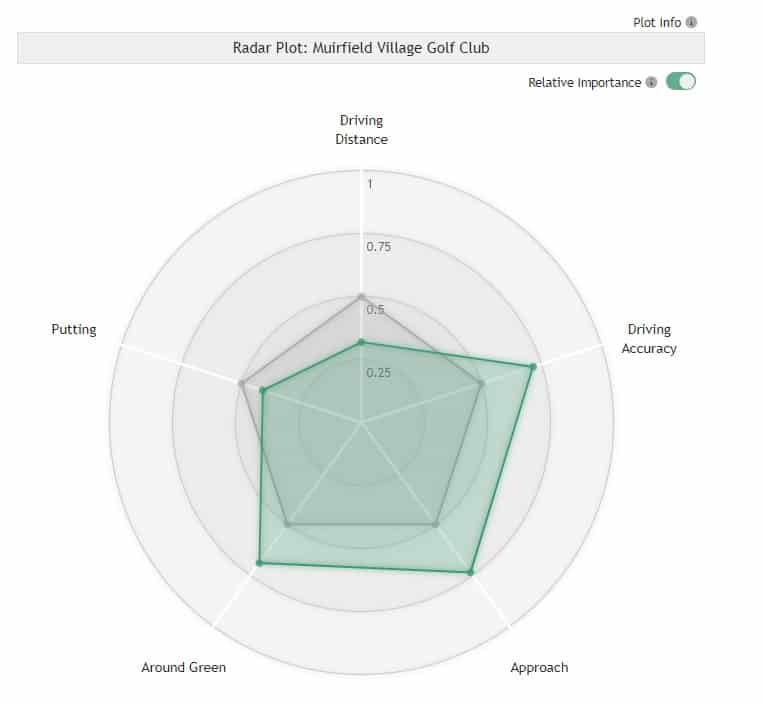 In past tournaments, distance is not a prerequisite. Hitting the fairway, however, is. Approach play and scrambling are very important. And one can overcome putting woes to still play well at the event. Will these traditional paths to victory hold after the renovations? We’ll see. But while the golf course has undergone significant changes the basic principles to success at Muirfield Village still are relatively the same. It’s safe to use this basic blueprint to target golfers this week.

Here is a list of golf courses that feature a high percentage of fairways hit and an average/slightly below average greens in regulation rate:

The first two golf courses on this list are no surprise. Jack has a strong affinity for Augusta National and he built The Concession Golf Club. Those are great golf course comps for Muirfield Village

The other three on the list may be unusual to compare to Muirfield Village. All those golf courses have high fairways hit percentages. They also have average to below-average greens in regulation hit. Particularly with Pebble Beach and El Camaleon, players often club down off the tee to make sure they’re in the fairway. Utilizing these three golf courses might help identify some surprising contenders in this week’s event.

Here is a list of annual stops on the PGA Tour played on bentgrass greens. This list may preview who will putt well at the Memorial Tournament:

Lastly, here are players in the field this week who have gained more than 1.5 strokes per round on the field at Muirfield Village (minimum of 12 rounds):

This list might be a preview of the types of players towards the top of the leaderboard at this year’s Memorial Tournament.