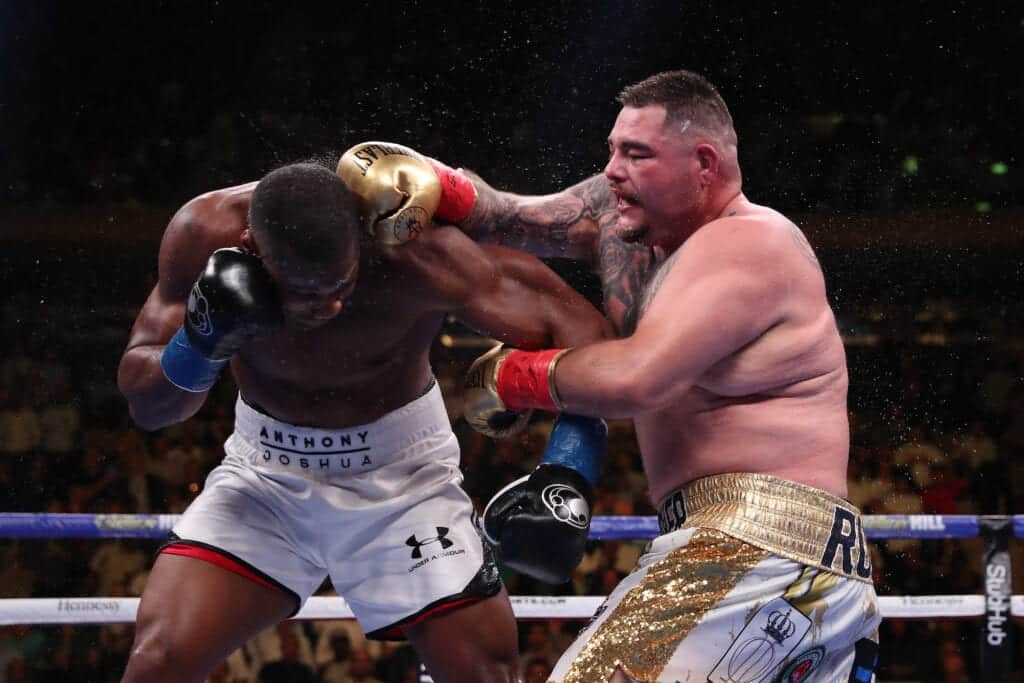 On the latest edition of the show, host T.J. Rives is back to preview the weekend of fight action from L.A. to Manchester, England with his guests.

Marquis Johns, Sr. Writer of BigFightWeekend.com and Manouk Akopyan of the L.A. Times and Boxingscene.com jump aboard to discuss it all.

They also discuss the latest with popular California Lightweight contender, Ryan Garcia, taking time from the ring for what he says is his own mental health. Manouk gives his insight from discussions he’s had one on one with with the WBC’s #1 Lightweight, Garcia about it. And, when will we see him again in 2021?

Ruiz is best know for his stunning TKO of Anthony Joshua (above) at Madison Square Garden in June 2019, as he won the WBA, IBF and WBO World Titles all at once. He then came in 15 lb. heavier and lost the belts right back to Joshua in a December decision  that year.

This will be the first fight card in California with fans present since the Covid-19 pandemic began in March of last year.

Manouk will be ringside for this entire card and he and Marquis preview the main event and other bouts to watch.

Finally, T.J. and Marquis go over the fight odds for the weekend’s action, including the Matchroom Boxing triple header of fights Saturday afternoon U.S. time in Manchester, England.

Women’s World Lightweight champ, Katie Taylor is a -570 favorite to retain her titles and New Zealand Heavyweight Joseph Parker being a slight fave over English vet Dereck Chisora in the Heavyweight main event.

Back to L.A. and that card, Ruiz is heavily favored at -2400 to beat the 40 year old Arreola. There are a couple of other fighters and fights to look at possible underdogs, too.

Hear it all on “The Big Fight Weekend Podcast” and make sure to subscribe/rate and review us on Apple Podcasts, Spotify, etc.!!