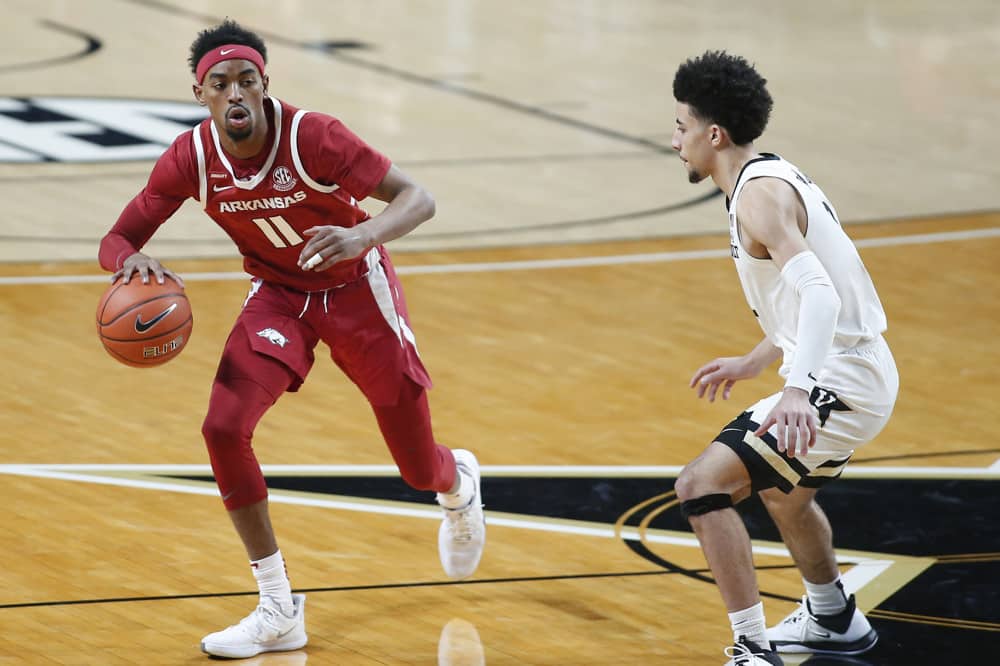 Welcome back Fantasy College Basketball fans.  This might be the best weekend of college basketball games so far this year.  Plus, with February coming to an end, almost every game has serious post-season ramifications. Let’s jump in and play some DraftKings NCAAB DFS.

Here are the plus and minus matchups for Saturday and Sunday plus some targets for the early Saturday DraftKings slate. Reach out to me on Twitter for thoughts on the other weekend slates as they become available on DraftKings

LSU @ Arkansas: LSU games often find themselves in this section of my weekly columns and this matchup vs Arkansas is no exception.  I love Razorback players in this game and with the expected fast tempo, LSU guys will be appealing as well.  LSU won 92-76 in the first game this season.

Florida State @ North Carolina:  The ‘Noles took down UNC, 82-75, in a high scoring affair back on 1/16.  Expect more points and fantasy production in the rematch here.

Texas @ Texas Tech: In the first matchup between these two top-35 defenses this year, the Red Raiders edged out the Longhorns 79-77, in a surprisingly high-scoring game.  I expect the rematch in Lubbock to be more of a slugfest.

Think you know who is going to win it all this year? Check out the latest 2021 college basketball championship odds.

Illinois @ Wisconsin:  Here’s another rematch that saw Illinois win the first game, 75-60, back on Feb 2nd.  In the past five games, the Badgers have been unable to break the 70 point threshold.  Plus, Ayo Dosunmu missed the Illini’s last game with a broken nose.  If he is out again, expect the Illinois offense to struggle as well.

If you look at the five most expensive guards on the DraftKings slate, three have a Questionable tag.  I’d steer clear of these players that are battling injuries.  The two remaining are Cade Cunnigham and Austin Reaves ($8.5K) who happen to be playing each other.  If you are looking to spend big on a guard, you’re probably deciding between these two.

I know Reaves has been on a roll, but I prefer Cunningham as he averages more rebounds, blocks, and steals. He does it all for the Cowboys and he’s the favorite to be the first pick in the NBA draft this year.

I’ve been saying it all year – roster guys going up against this LSU defense.  While Arkansas has a couple of attractive perimeter options, I can roster Tate for $1.5K cheaper than Moses Moody ($7.8K).  He’ll be the Razorback I’m targeting for Saturday. 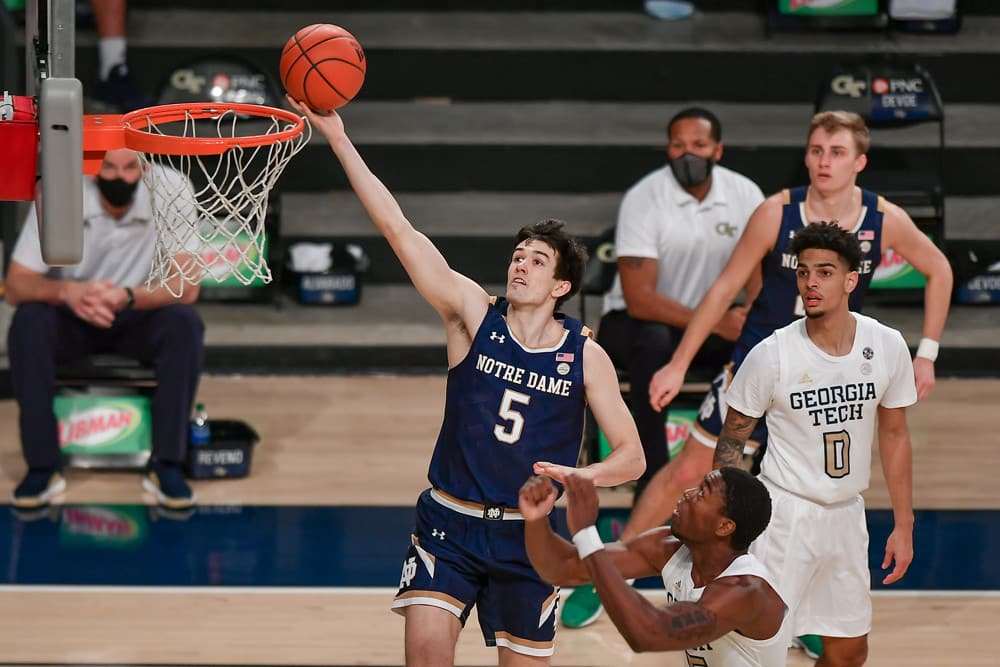 It’s a roll of the dice but I am a gambling man. Notre Dame faces off against a bad Boston College team (137th ranked defense in the country) coming off a COVID break.  The Fighting Irish put up 80 on BC earlier in the year in a game where Ryan registered over 25 fantasy points.  We should see “the good” Cormac this game.

There’s a plethora of attractive big men in the early saturday slate.  I’ve highlighted most of these guys at different points over the course of the season.  Someone who I have yet to include in my column is the 6’7” Arkansas senior, Justin Smith.

Well it’s about time. Over the last three games, Smith has played at least 37 minutes in each contest while averaging 36 fantasy points.  This includes a double double vs Alabama earlier in the week.  Just imagine what he’s capable of against LSU. 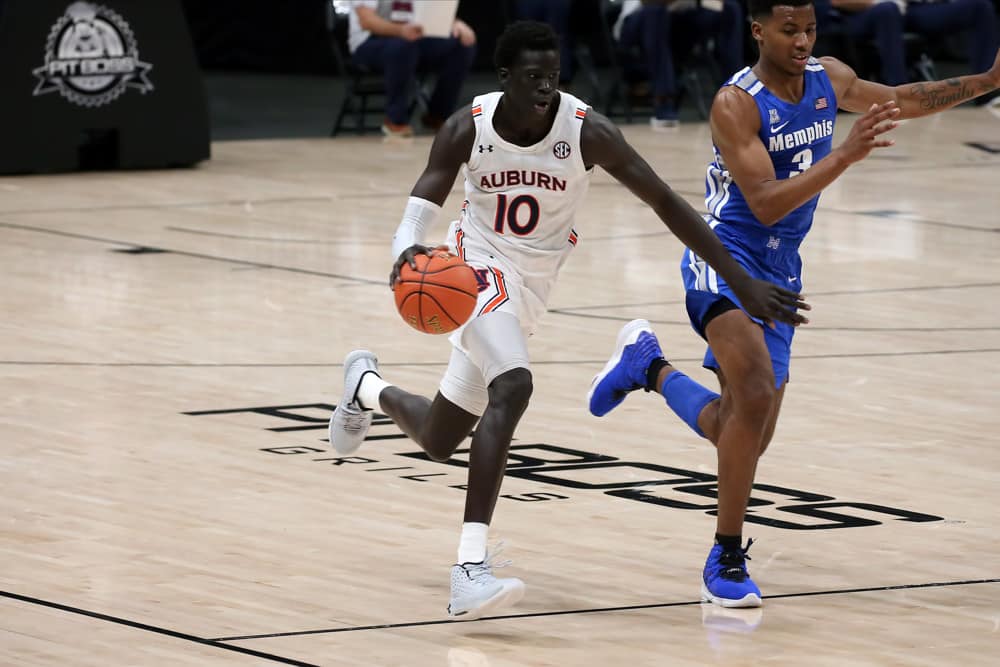 Thor is a 6’10, 205 lb freshman from Anchorage, AK who has been coming on of late. On the season, Mr. “skin and bones” only averages 22.7 minutes a game but that has risen up to 27.3 minutes over the last three games.  The result has been an uptick in fantasy production, putting up over 31 fantasy points per game in this stretch.

It was only twenty days ago when White dropped 30 points on Auburn.  In that game, the senior big man put up 55 fantasy points.  Find me another guy less than $5K who’s had that kind of performance.  Ole Miss plays a banged up Vandy squad on Saturday.  White has the potential to go off again.

Iowa @ Ohio State: Here’s a contest between two teams that suffered tough losses on Thursday.  KenPom loves these offenses and there’s a lot of good reasons why.  The Buckeyes won the first matchup 89-85.  I wouldn’t be surprised to see another game in the 80s.

Pittsburgh @ North Carolina State:  The Wolfpack toppled the Panthers 74-73 in Pittsburgh just a couple of weeks ago.  Since then, two of Pitt’s best players (Xavier Johnson and Au’diese Toney) have quit the program and are entering the transfer portal.  Pitt is a mess which obviously bodes well for NC State guys.  Plus, the player departures should open up opportunities for Pitt’s other guys who I’m sure will be priced cheap.

Villanova @ Butler: Expect a snail-like pace in old Hinkle Fieldhouse on Sunday.  Earlier in the week, the Bulldogs limited Seton Hall to only 52 points.  Villanova will have a better offensive output than that and should win the game, but this isn’t the juiciest matchup for fantasy production.

Memphis @ Cincinnati:  While both Memphis and Cincy play at a surprisingly fast pace, they lack in efficiency on the offensive end of the court.  Additionally, one of Cincy’s best players (David DeJulius) has recently opted out of the rest of the season.  I’d be looking elsewhere.