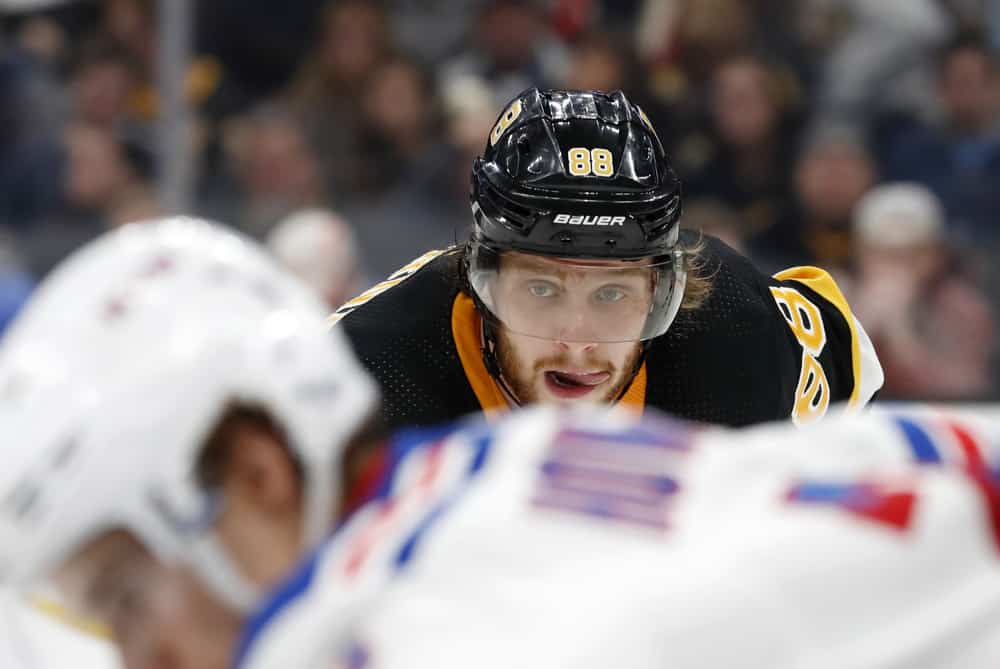 The NHL has only three games scheduled this Friday night. The main game to focus on is the Boston Bruins at the New York Rangers.

The Bruins are coming off a loss to the Islanders on Thursday night, while the Rangers also lost their last game. However, the Rangers were off Thursday after a 4-3 loss to the Flyers on Friday night.

Be sure to check out our new NHL Picks page where we will be picking every game every day!

The Bruins are the top team in the East Division while the Rangers are toward the bottom. We’re going to likely want to load up on Bruins in this slate.

Choosing a captain is extremely important for a showdown. For 1.5x their price, you get 1.5x their points. You can try to hit it big with a goalscorer or play it safer with a defenseman or someone that shoots a lot.

For this slate, let’s take a look at one of each.

Pastrnak has recorded at least one point in seven of his nine games this season. Four of those games have been multi-point efforts, including three multi-goal games (two hat tricks). He has 36 shots on goal in those nine games, averaging four shots per game. That is just one less than the five-shot threshold for the bonus points.

If Pastrnak puts up a performance like he normally does in your captain slot, you’re going to win some money.

You can get a pretty solid floor in Adam Fox for almost four thousand less than Pastrnak. The defenseman has a chance to get both the shot on goal (five) bonus and the blocked shots (three) bonus. He has 9.3 points or more in nine of 17 games this season.

Fox has been better recently with 12.7 or more points in three of his last four and four of his last six games. In those six games, Fox has 18 shots on goal, 15 blocked shots, and just one point (an assist). If he is able to keep up those shot and block totals, he’ll give you a solid floor. If he can find the scoresheet, even better.

For this lineup build, we’re going to go with Pastrnak as the captain and use Fox in a flex position.

With two expensive players to start off, we’re going to need some lower-priced players to balance it out.

The key to any good showdown lineup is having a lower-priced player come up big.

We’re going to go bargain hunting in the minimum-priced ($2,000) bin in order to get a few more expensive players in your lineup. Here are two options.

EDIT: Anthony Bitetto is out of the lineup.

Brendan Lemieux is on the Rangers’ third line and second power-play unit. He has four points (one goal, three assists) in 16 games this season.

Lemieux is more likely to bust with a zero than Bitetto, but he’s had 7.1 or more points in four games this season. That includes a 14.1-point game against the Bruins and another 15.6-point game.

We’re going big and taking Lemieux for our lineup build.

Okay, now we have a reasonable $7.8k left per player.

Let’s take a look at a few mid-to-high range options.

Charlie McAvoy is averaging 10.9 fantasy points per game this season and has taken on an even larger role with the Bruins’ injuries.

McAvoy has 7.6 or more points in 12 of 17 games this season. He averages two shots and two blocks per game. However, he has reached the three-block bonus four times – including twice against the Rangers.

You can pencil in McAvoy for double-digit points and leave it at that.

Brad Marchand has points in 13 of 16 games this season, giving him a solid floor. He averages 2.56 shots per game and has reached the five-shot bonus four times.

Marchand could tank your lineup – he has 3 or fewer points in those three games that he didn’t record a goal or assist – but he could also put it over the top. He has 18 or more points in six games this season. If the top line scores a few goals, Pastrnak and Marchand are going to be involved.