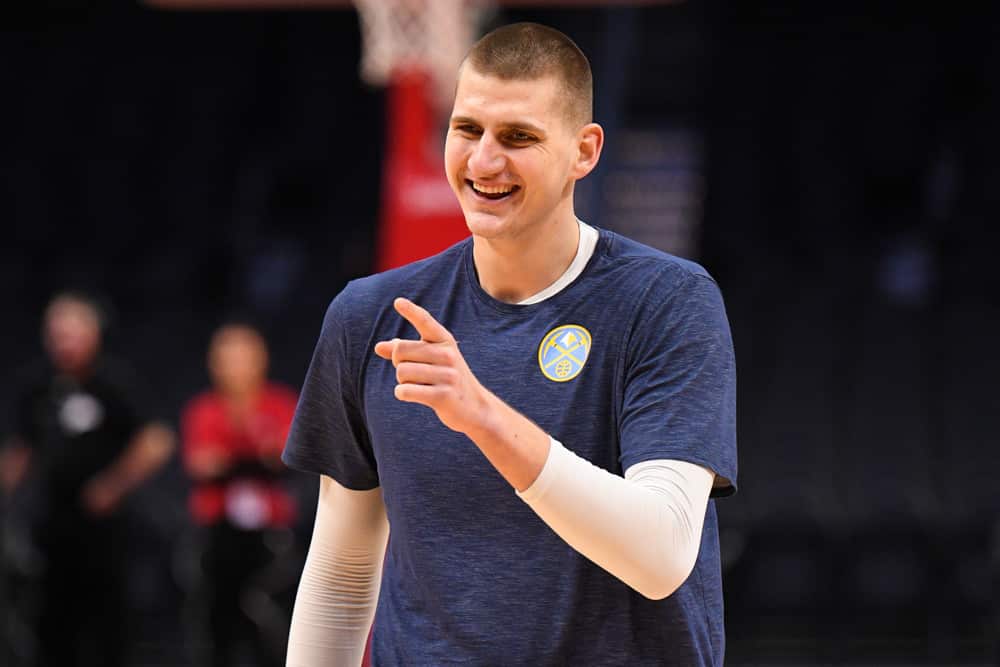 Hello everyone! The NBA rolls on, and with it brings us a five game NBA DFS slate. These games may not be the most even. However, I like what I see from a DraftKings GPP point-of-view. Feel free to tag along and follow me on Twitter (@bballbetting101) to chat about the slate.

I’m starting this NBA DFS lineup with a for-sure points scorer. D’Angelo Russell draws a great matchup against Portland who ranks 28th in defensive efficiency. He’s averaging a nice 34.4 DFS points per game, and you can depend on him to give you points.

Russell is playing an average of 30.3 minutes per game and his usage is through the roof. Minnesota isn’t a team with a ton of offensive weapons with KAT on the shelf. However, Russell continues to lead the offense and I’m playing him at my point guard position.

For the shooting guard in this lineup, I’m looking to the Mavericks veteran Tim Hardaway Jr. He’s averaging 28.1 fantasy points per game despite a rather poor start with his shooting. However, things are looking up for him as he draws Denver who ranks 29th in defensive efficiency.

Hardaway Jr. finally got things going with an 11-14 night including 8-10 from three in 31 minutes against the Rockets. As I mentioned, the Nuggets aren’t the best defensive team. Their worst position also happens to be at shooting guard. Look for Hardaway Jr. to continue to find his shot.

Moving along, let’s take Brooklyn’s bubble star Caris LeVert at the small forward. Kevin Durant is out due to being in COVID protocols. This directly benefits LeVert whose usage sky rockets. He’s averaging a nice 31.7 fantasy points per game on the season so far.

Brooklyn draws a tough matchup defensively in Philadelphia. However, someone has to score for the Nets and LeVert will see plenty of shot attempts. He’s taken at least 10 shots in every game but one this season, and if he can get some to fall then this will be the play of the night.

We’re looking for a cheap source of points, so we will take Brandon Clarke at the power forward. It’s been a less than stellar start to the season for the sophomore. He’s averaging only 21.5 fantasy points per game despite being on a banged up Memphis squad.

However, there’s a method to my madness. Andre Drummond and Jonas Valanciunas will be a great battle in the paint. I believe these two may slow each other down offensively and open up some opportunities for Clarke at the PF. He’s shot at least 10 times in five straight games and should see a decent amount of shots here also.

I’ve got to pay up for someone on this NBA DFS slate. This being said, I’ll take the Dad Bod God Nikola Jokic at the center position. He’s putting together one of his best years so far early in the season, averaging 24.1 points and 11.9 rebounds in 35.9 minutes per game.

Denver plays the Mavericks who may rank 10th in defensive efficiency. However, Dallas has a glaring weakness with their big men, especially their centers. Jokic is going to be a nightmare in this contest, and I’ll pay up for him despite being the most expensive (and probably chalky) player on the slate.

This is going to be a low-ownership play, but I am taking the veteran Danny Green at the guard position. It’s been a bumpy start to the season for Green. However, he’s still averaging 18.7 fantasy points per game and could be a sneaky option for points.

Defensive ability has provided Green with a guaranteed spot in the rotation. He’s seeing around 20 minutes per game so far this season. His poor shooting streak to start the season may be over as he’s now shot at least .500 three straight games. Maybe he can continue this good shooting against Cleveland.

We’re going to complete the close-your-eyes stack of Minnesota with Juancho Hernangomez. There’s been a need for a big man to step up for the T’Wolves with KAT injured. Hernangomez is seeing his minutes increase each game, and he’s making a spot for himself in the rotation.

Hernangomez is fresh off a 46.5 fantasy point night where he had 25 points, eight rebounds with a couple assists, blocks and steals as well. As I mentioned earlier, Portland isn’t the best on the defensive end. Hernangomez will be overlooked on this slate and he could be the difference-maker also.

To wrap up this lineup, we’re taking JaMychal Green for a Denver big-man stack. He isn’t seeing starter minutes or anything, but Green is a great cheap source of DFS points. He’s averaging 19.67 minutes per game, and he’s making the most of these minutes with an average of 24.3 fantasy points per game.

The Nuggets could look to rely more on Green for his ability to stretch the floor and play good defense as well. As long as Denver finds minutes for him in their rotation, then the efficient shooter Green will rack up fantasy points. You need some boom or bust in your lineup for GPP contests, so this is a great player to nab. 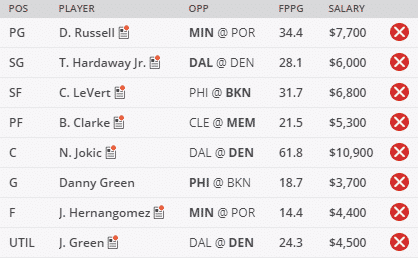