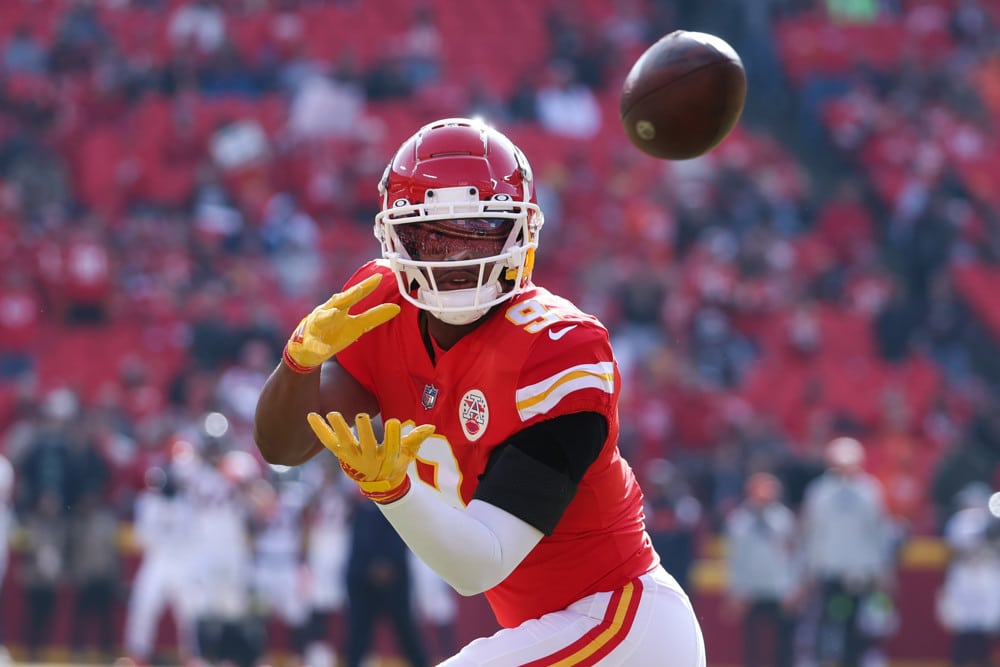 In this article I will feature positional values, stacking options, and games to target. Below each player are additional stacking options for that player, the defense they’re playing that week, as well as that defense’s rank against the player’s position (fantasy points).

Thanks for checking out another SGPN Battle Royale article Week 18 edition. Good luck this weekend in your DFS slates and in your fantasy football playoff matchups.

Patrick Mahomes checks in as the QB2 in Underdog Battle Royale ADP, however, he is my number one-ranked quarterback this weekend. He is second in yards per attempt and fantasy points per game in 2022 and I don’t expect that to change this Sunday. The Jaguars rank 25th in fantasy points given up to the quarterback position as well, and this should be a high-scoring affair on both sides.

Despite finishing as a top-five fantasy quarterback in three of the final four weeks of the season, Allen’s play has been slightly erratic. He has seven multi-interception games this year, including two interceptions and three fumbles last week against the Miami Dolphins. He’s so dynamic with his legs and arm talent it doesn’t matter for fantasy football though. He shouldn’t have any problems producing even in a tough matchup against the Cincinnati Defense.

Jalen Hurts should finally be at full strength as he is off the injury report heading into this Divisional Round matchup. Despite playing in Week 18 to secure the number one seed, he clearly wasn’t himself. Hopefully, that changes this Sunday as this is a player with 13 rushing touchdowns on the year and surprisingly ranks fourth in QBR.

We are lucky to see Joe Burrow this week after a scare against the Lamar Jackson-less Baltimore Ravens. The major concern this Sunday will be if his left tackle Jonah Williams can suit up after dislocating his knee this past week. The Bengals’ offensive line struggled and they would be in a tough spot without one of their better players.

Trevor Lawrence will be one of my favorite plays this week given his price point and I have him right alongside Joe Burrow in my rankings. Additionally, he faces a Chiefs defense that surrendered two top-five fantasy QB performances to Russell Wilson recently. Lawrence was incredible in the second half of last weekend’s game against the Chargers too, and it shouldn’t take that long to get going against Kansas City.

No one has possibly made more money this season than Daniel Jones who should command a large contract in 2023. He is coming off a 301 yard passing effort against the Minnesota Vikings to go along with 78 rushing yards. This is despite numerous drops from one of the least talented wide receiver cores in the NFL. Jones doesn’t need a strong passing performance to be fantasy relevant either as he has been one of the best rushing quarterbacks in the NFL this year.

When #Giants needed #8, he delivered and lead them to the playoffs. I don’t know what else people need to see.

Dak Prescott had 13 interceptions in his last 9 games before completely turning it around against the Buccaneers last week. He accounted for five touchdowns on his way to routing Tampa Bay 31-14. He will face a fierce pass rush though this Sunday against the 49ers and I expect those turnovers to rear their ugly head.

Despite his stellar play recently Brock Purdy finds himself as the last ranked quarterback on this list. He has yet to face a pass rush like this and I think we could see him struggle this week if he is forced to use his legs to leave the pocket. I think this could be a low-scoring affair on both sides, which is why these players find themselves seventh and eighth in my rankings.

Kelce is easily the top choice for the top spot but he has only finished as the overall TE1 twice this season. Furthermore, he has actually finished as the TE6 or worse in five of his last six games. He still has the highest ceiling of any tight end on this list, nonetheless, I’ll be going in other directions in the first round of Underdog Battle Royale drafts this week.

The Brock Purdy experiment has been fantastic for George Kittle as he is receiving much more steady target volume than he did with Jimmy Garoppolo. While he had a quiet game last week, he caught seven touchdown passes in his final four regular season games. Kittle averaged nearly seven targets a game over that span and is the only player on this list who matches Kelce’s upside.

Perhaps y’all can help me with something this morning

If you remove QB from the equation, is there any offensive group you’d take over the 49ers this century?

Everyone on the Jaguars played well in their incredible comeback last week against the Los Angeles Chargers. Evan Engram himself caught 7 passes for 93 yards and a touchdown in a bounce-back performance after a slow couple of games. He faces a poor Chiefs defense this week too and had 40 targets between weeks 13 and 16.

Dalton Schultz is fantastic when given the targets but his usage has been inconsistent this season. Some of his production has been hampered by Prescott’s turnover problems as well. This week the 49ers will be tough on Prescott, and Schultz’s production will depend on if he can get six or more targets.

Dallas Goedert missed five games in the second half of the season but was able to return in Week 16 against the Dallas Cowboys. While he hasn’t had a productive fantasy performance yet, he did receive 13 targets in his final two regular season games. Goedert should be fully healthy now and was second on the Eagles in targets when he left with his injury.

Dawson Knox has been on a hot streak of late catching a touchdown pass in each of his last five games played. He also had less than 20 receiving yards in three of those performances making him the definition of a boom/bust tight end this week.

While Tony Pollard hasn’t been able to regain his midseason form, he did play 58% of the snaps last week against Tampa Bay. While that isn’t a bell cow role, he is now firmly ahead of Ezekiel Elliot in the pecking order. Despite the matchup being a tough one, Pollard should receive a healthy amount of passing targets.

Isiah Pacheco is receiving the highest number of rushing attempts in the Chiefs’ offense, unfortunately for him, that doesn’t mean much. If you are looking for a way to get different this week though this could be your ticket as he is going undrafted in many Battle Royale drafts. The Jaguars have surrendered some nice performances on the ground to Derrick Henry, Tony Pollard, and D’Andre Swift recently as well.

Travis Etienne is in a dream matchup this week against a poor Kansas City defense, and another 100 yard rushing performance could certainly be in the cards. The only problem with Etienne is his lack of involvement in the passing game. For a player who was supposed to be a pass-catching running back coming out of college, having only three games with three or more targets is concerning.

After going on a hot streak midway through the season, Zay Jones’s production slowed in the final few weeks of the season. That all changed last week as he saw 13 targets on his way to 74 yards and a touchdown. Someone is going to have a big day against this Kansas City Chief secondary, and I’ll be taking lottery tickets on a lot of Jaguars this weekend.

The Jaguars were panned for the price they paid to acquire Christian Kirk, Zay Jones and Evan Engram in free agency last March. Their lines from last night’s playoff win:

Juju Smith-Schuster is another player that was playing fantastic midway through the year, but fell off after he left with a concussion in Week 10 against the Jacksonville Jaguars. Patrick Mahomes is still his quarterback though and the Chiefs should have a lot of success through the air this weekend. I’ll be taking all the cheap shots I can on Kansas City Chiefs’ weapons.

This one is obvious but Isaiah Hodgins isn’t as chalky this week as he is on other DFS sites, He is going undrafted in some Battle Royale drafts and could be a huge value in the last round. He is coming off a 105 yard performance too and Daniel Jones is playing like one of the best quarterbacks in the NFL right now.