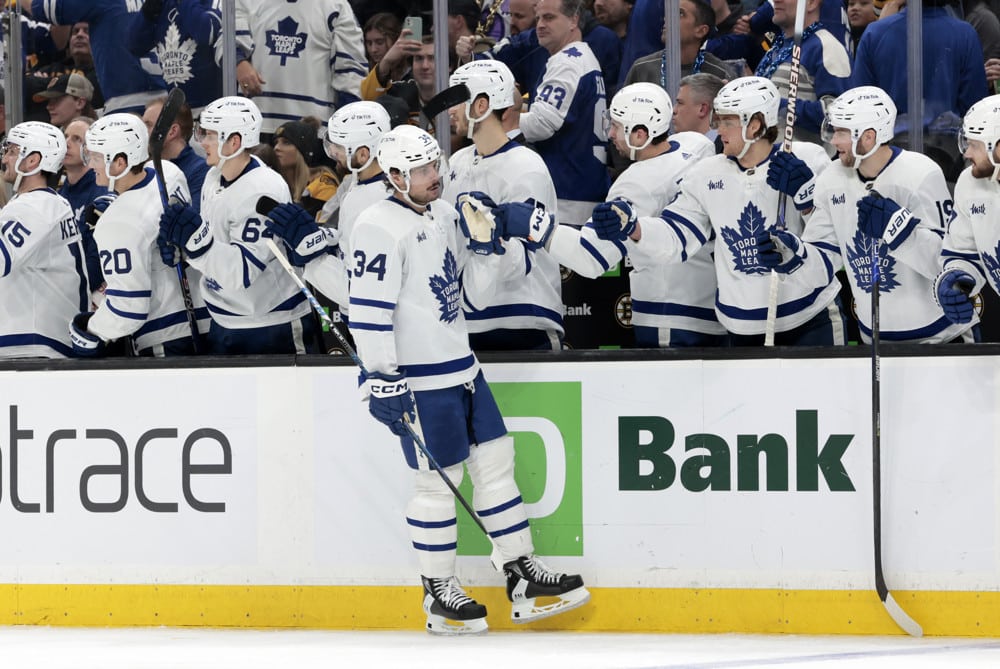 It has become a fact of life that the rest of the NHL like to laugh at the sheer misery of Toronto Maple Leafs fans, especially when it comes to the playoffs and the curse that seemingly haunts them, stopping them from ever progressing beyond the first round. Regardless of how much talent is in their roster. But in my opinion, you can’t deny that the Leafs are a genuinely fantastic team and if they can get past their mental block, they have a roster that is truly capable of making history.

We’re going to be taking a quick look at the Leafs roster position by position and evaluate how they’re looking as we push on through the 2022-23 season. The Leafs roster is full to the brim of talented players but what are the real strengths of this team? When we break things down we’ll just be looking at it in three parts, goalies, forwards and defenders. So let’s start at the back with the Goalies.

Matt Murray has been somewhat of a breath of fresh air for the Leafs. Can he continue his good run of form since his injury?

One of the big issues moving into this season, seemingly the same as every season at this point, was the man between the pipes. The Leafs had a steady main man under Frederik Andersen for a while before he was pushed out by Jack Campbell, both of whom have moved on since. But this season the Leafs have Matt Murray and Ilya Samsonov to deal with, as well as Erik Kallgren filling in due to injury, and though things didn’t exactly start off with smooth sailing, the ship has been righted for the most part.At the time of writing this piece, the average save percentage for a goalie in the NHL is .905%, with an average of 2.95 goals against, time to compare that with what the Leafs have on offer.

Starting with the resurging Matt Murray, we have a goalie with a save percentage of .919% and averaging 2.48 goals per game. He has also won more games than lost with an 11-4-2 record. Ilya Samsonov also has an above average save percentage at .914% but also less goals conceded with 2.33. With 17 games played for Ilya, he has a slightly better record of 12-4-1, not bad. While things for Kallgren haven’t been perfect when called upon, he hasn’t exactly been dreadful by any stretch. A save percentage of .892 is still very good and he has below average goals against with 2.67. However his record isn’t great, 3-2-4, those 4 overtime losses could hurt the Leafs in the long run! It looks like the Leafs are in safe mitts at the back, in my opinion and arguably look the strongest they have looked for a while!

There has been one thing that the Leafs have struggled with on the defensive end, especially when it came to playoff hockey. The physical side of the game. They have found themselves being bullied on the blue line season after season, but this season in particular things appear to have just clicked? In a season where Muzzin, TJ Brodie and Morgan Rielly have missed a fair amount of ice time between them, Mark Giordano and Justin Holl have really stepped up.

But the big names aren’t the only ones putting in the big performances, while Timothy Liljegren and Rasmus Sandin are still massively inexperienced in comparison to the people we’ve mentioned, when called upon they have shown they’re more than capable to fill the gaps. It’s unsure whether the Leafs will still have Muzzin come the end of the season, but with him fit and ready to play, the Leafs currently have 10 capable NHL defensemen. Very solid.

So the leafs are looking tighter at the back as a whole, with the goalies and the defenders looking pretty good. But with a few big games coming up including an outing to Boston to take on the Bruins who currently sit with the best record in the entire NHL. But how do the experts think they’re going to fare against a team the Leafs historically struggle against? Well, checking out odds from available sites. Understandably, the Bruins are the favourites here.

You can get the Bruins at -154 which would see a return of $8.25 from a $5 stake. For the Leafs who travel to the TD Garden in Boston, you’re looking more towards +130, which sees a return of $11.50 from the same $5 stake. While we’re here, it’s probably worth taking a look at who the favourites are to go all the way and lift the Stanley Cup this season, we looked at a few of the legal sportsbooks in Ontario to check for the best odds here and this is what we came up with.

Sitting in first place as the favorite to take home the gold this season are none other than the Boston Bruins, you can get the bruins at +550 right now which returns $32.50 from a $5 stake. Sitting just behind them are the Toronto Maple Leafs, you can get +750 on the Leafs which sees a $42.50 return from $5. They have been given the same odds as the Vegas Golden Knights. Just behind those two are the Colorado Avalanche at +800 which is a $45 return from $5, then rounding out the top 5 are the Carolina Hurricanes who come in at +1100, this would see a $60 return from $5.

If there is any position on the ice the Leafs shouldn’t be worried about, it’s their forwards. But even with Auston Matthews not completely on fire like he has been the past few seasons, the Leafs are still playing some lovely free flowing attacking hockey. William Nylander is absolutely on fire right now and sits as the Leafs top scorer with 22 goals and 47 points for the season. Matthews, though he isn’t smashing the goals in, he still has 20 for the season and again, 47 points. Which is outrageous to say he isn’t “at his best” when he’s putting up numbers like this.

But one player in particular who is flying high is Mitch Marner. Marner has notched 34 assists this season and put up 16 goals, bringing his points total to 50 through 43 games and is looking like he is enjoying the game more than ever before. He truly is a breath of fresh air and with other young blood like Michael Bunting mixed in with the experienced John Tavares, the Leafs really are quite the balanced outfit in attack and can be a problem for any defence in the league! 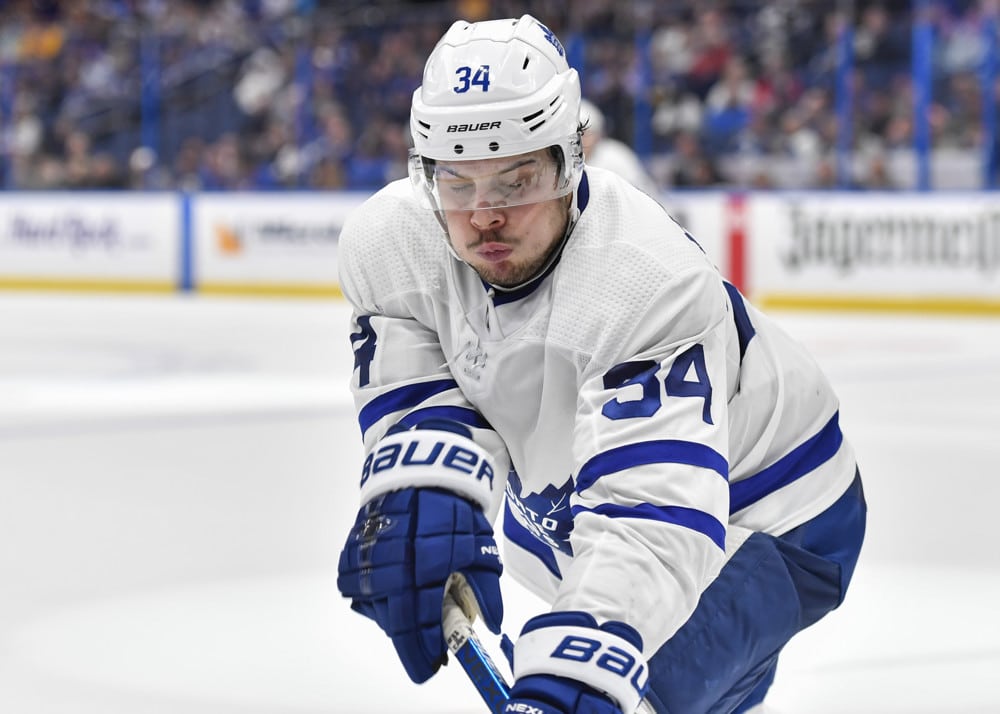 Auston Matthews is the talisman of the Maple Leafs, even when he isn’t at his best he is still on pace for a 40 goal/100 point season!

So, Leafs fans. How are we feeling this season? There’s no denying the talent across this roster and if Matthews can get firing for fun like he has in past seasons, they have every chance to finally push past the dreaded first round of the playoffs, but with the apparent issues plaguing the roster in recent years between the pipes, there is also the chance that they fall flat on their face when it matters most once again. As a Leafs fan myself, I don’t know how many more times I can see my team struggle like that, but we hate to love it really, don’t we?

There is only one thing that remains fact, however. We still have right around half a season worth of hockey still to play and anything can happen between now and then. Will the Leafs take that next step? Will the Bruins follow through on being the current favorites to lift the Stanley Cup? How are the rest of you fans feeling about this season? Do you believe your team has what it takes to make a deep playoff run? Or are you going to be stuck watching hockey as a neutral come the postseason? Plenty of hockey remains until that trophy is raised some time after April!