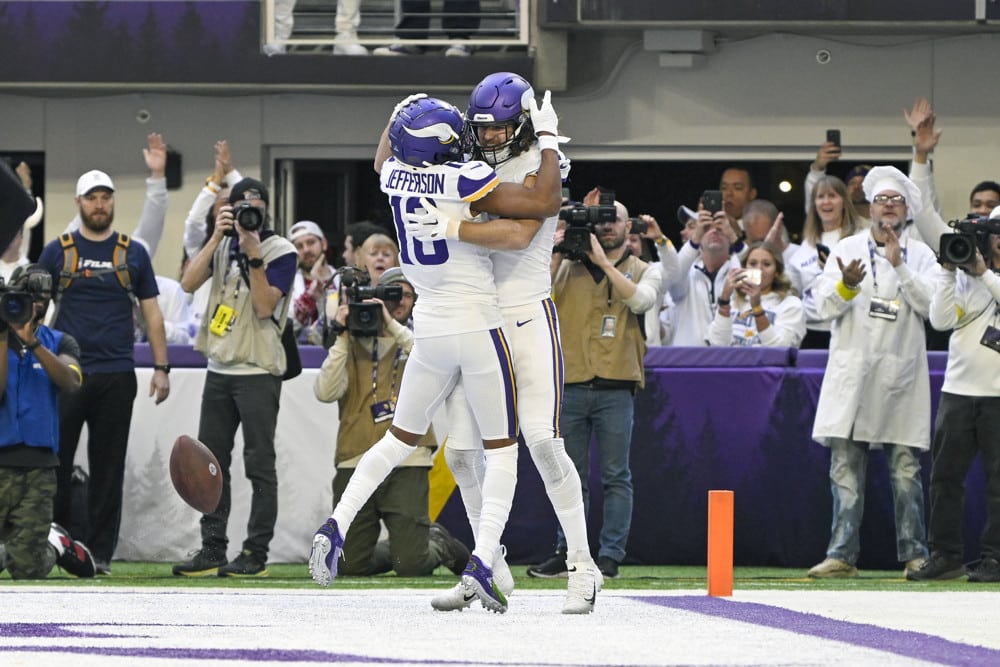 The guys (@GamblingPodcast) give out their favorite NFL Super Wild Card Weekend prop bets and are joined by Munaf Manji (@SportsNerd824) from the NFL Gambling Podcast.

Munaf (@sportsnerd824) from the NBA gambling podcast joins the show to discuss specific prop bets for this Wild Card Weekend. On MLK day, the site of the NBA podcast will have a free contest to win a $100 gift card to the SGPN merch store. Downloading the SGPN app will be the easiest way to enter this contest.

In this Wild Card Weekend there is a lot of money being gambled on players fighting for a chance at the coveted Super Bowl Championship. While everyone should be fully motivated, some will always want more than others. Josh Allen is one of those super competitive guys and has the city of Buffalo behind him, he will leave it all on the field. Two more rush yards bets are Deebo Samuel and Elijah Mitchell.

Deebo had over 50 rush yards in a game against Seattle this year and Elijah Mitchell could benefit in volume from Kyle Shanahan sitting on an early lead and trying to waste clock. Etienne has a chance to benefit from a bad rush defense from the Chargers and he has been seeing a good chunk of carries. If stars align, Etienne can have a huge day on the ground and even through the air. The Jags and Chargers game features two quarterbacks in their first playoff start so it is expected they will be nervous. The crowd here will be rocking, and an early punt could be likely.

Ekeler has been the guy for the Chargers all year and Mike Williams is out. Herbert will be relying on Ekeler more than ever in this high-stake game. No one has much faith in the Dolphins offense despite flashes of elite all year. Head Coach Mike McDaniel has his job potentially on the line and will be putting together his best schemes to produce. With a thin backfield, Wilson will benefit. Allen’s desire is as much of a curse as it is a blessing.

He tends to force plays at times and has had an interception issue all year. At plus odds, it is hard to pass this up. For all the same reasonings as well as the pressure of the Giants front, Kirk Cousins will likely throw an interception as well. Dexter Lawrence will be affecting Kirk Cousins all night for sure and should be able to bring him down at least once as he has a favorable matchup.

Keeping it within this Giants game, Daniel Jones might just run all over the field, him leading the game in rushing is an attractive bet. In the last matchup against the Vikings, the Giants let Hockenson run the table. They have a plan to shadow him with McKinney and shut him down, which could open up KJ Osborn to more opportunities.

If the Buccaneers want to win this game, they will rely on the greatness of Tom Brady, which they have all year. His game logs show attempts of well over 43 pass attempts in games, so in this playoff game it should be attainable. JK Dobbins should also see plenty of volume as he is probably the safest place for the Ravens offense to go to. Trenton Irwin you probably have never heard of. However, whenever he does play for the Bengals, he has well over 7.5 yards and gets a lot of redzone action. If history permits, this one is easy.

Dexter Lawrence to record a sack at +124

Daniel Jones leads the game in rushing at 10-1

Josh Allen to throw an interception at +112

Kirk Cousins to throw an interception +110

Parlay Daniel Jones over 55 rush yards, Richie James over 74.5 receiving yards, James and Jones both to score a touchdown pays out at 65-1