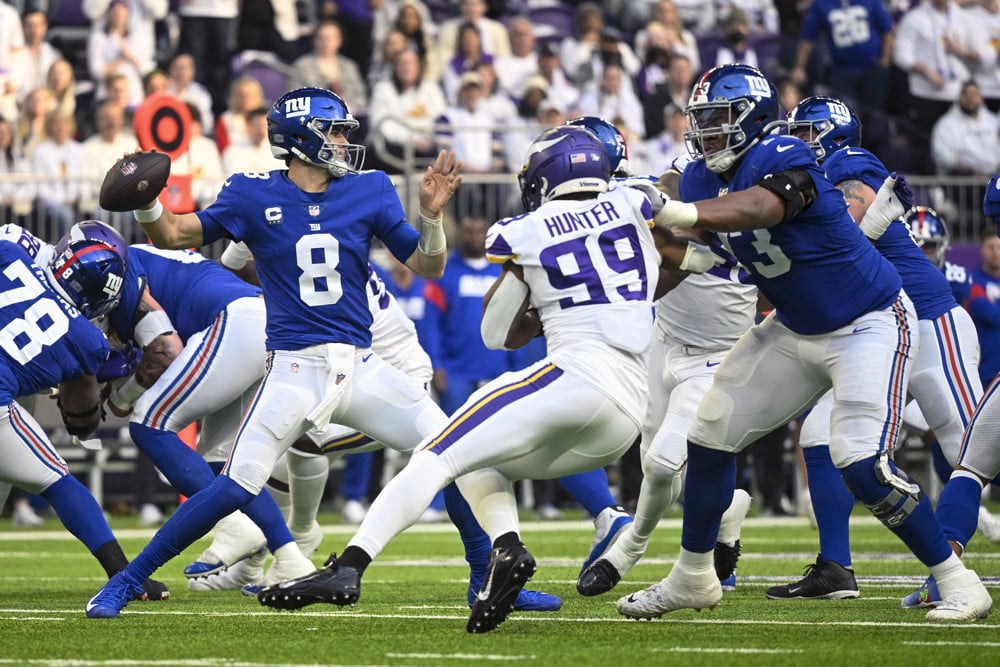 The guys (@GamblingPodcast) give out all their NFL playoff predictions in their NFC Super Wild Card Weekend Picks podcast with special guest Brandon Jacobs (@BJacobs27).

The AFC picks show was earlier today, but Sean and Kramer are back for the NFC picks with special guest, Giants great, Brandon Jacobs. He is one of the best running backs to play for the Giants and is a real-world example for discussing playoff success as we kick off postseason play. In his first Super Bowl, he discussed how Michael Strahan was the only person on the roster for the Giants who had Championship game experience and how he inspired the team.

The advice was brief, but it resounded throughout the team, and it clearly worked. Jacobs thinks the Giants can steal this Wildcard game from the Vikings after their heart-breaking loss a few weeks ago. For the weekend in general, he likes the 49ers, Giants, and Buccaneers all to win, specifically noting how the moment will be too big for the Cowboys.

The story here of late has been how well Brock Purdy has stepped up and played. Whether or not it is the offensive weapons and great offensive scheme, he is done what he has needed to and more. Purdy is a rookie which a knock in the playoffs, yet he hasn’t looked like one.

Not to add fuel to the fire, but the Seahawks defense has struggled especially to the Tight End, which seems to be Purdy’s favorite target. In addition, Geno Smith looks like a ghost of who he was to start the season. Unless the Seahawks defense wakes up, its hard to not take the 49ers

These teams shared a heated battle not too long ago, with the Vikings coming out on top. The Vikings offense had plenty of movement up and down the field on the Giants, but this was without Adoree Jackson, Xavier McKinney, and without Ojulari and Leonard Williams for most of the contest.

Defensively, the Giants have a lot to prove and know this, they are playing with confidence. On the other side of the ball, Daniel Jones has turned into a leader and inspiration for his other teammates. He will put together hopefully a Eli Manning like playoff run and lead them to glory.

A total of 45 seems low for two marginal defenses and offenses with high powered weapons. As old as he is, Tom Brady in the playoffs is not one to overlook, even for how bad they have been against the spread (4-12-1). In the first game of the season, Tampa Bay beat up on Dallas a little bit winning 19-3, when Dak was healthy. Despite missing 5 games, Dak still found a way to lead the league in interceptions. With issues on both sides of the ball, Tom Brady should find a way to do what he’s done his whole career: win.

Cade Otton gets a lot of snap share and should see a lot of opportunity, along with Noah Fant. Richie James seems to score a touchdown every game and Chris Godwin will be operating the middle of the field. The Giants at plus money could be a gift, and Tampa Bay looks rough, but the Cowboys are looking much worse. Deebo has been getting increased love in the offense and it would be smart for them to get him going early in the playoffs.