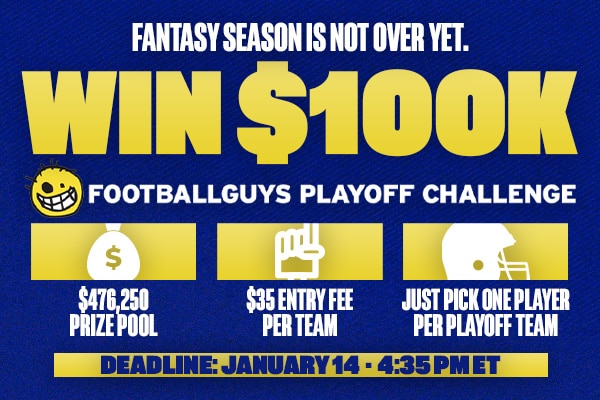 It’s that time of year again, the NFL playoffs are back baby, and that means that the FFPC Playoff Challenge is back too! Time for the NFL cream to rise to the top, or maybe we see some ultimate collapses?

Who knows, but we do know that the Cowboys will undoubtedly lose a game before they get to the Super Bowl. I’m kidding people….or am I? Either way, there is some exciting football to watch, and of course, we all want to get in on some action!

The FFPC Playoff Challenge is a game unlike any other. In this article, I will go over some rules, format, scoring, strategy, and players I like at each position. The playoff challenge runs the length of the entire NFL playoff season starting on January 14, 2023 with the Wild Card Weekend games and ending on February 12 with the Super Bowl.

If you haven’t signed up for FFPC yet, Click the link. http://sg.pn/ffpc  Or feel free to use our PROMO code, SGP at sign up and get $25 off of your first $35 or more entry fee. Again, that is promo code SGP.

The FFPC Playoff Challenge runs from the first week of the NFL playoffs and goes through the Super Bowl. Each week your team will score points. Those points will be added to your team’s total which will accumulate for the duration of the contest.

Super Bowl points will count as DOUBLE the points toward each team’s total. The twist on the contest is that each week you will have some players on your team that will be eliminated from the playoffs when their respective team loses.

This means you want to try and pick players from teams that won’t get eliminated on Wild Card Weekend. Instead, try and find players who will score the most points on their respective team.

There is no draft. You will construct your roster based on a few factors. These include how long you believe that player’s NFL team will be in the playoffs, how many points you think they could accumulate during their run, and positional strategies for each position.

Once you have selected your roster, it will be your roster for the entire duration of the contest. You do NOT pick new players each week. As I said before, some of the players on your team will be eliminated. So be selective in who you choose.

Each team will choose twelve (12) players from any of the 14 NFL playoff teams but ONLY ONE PLAYER PER TEAM. For example, if you pick Josh Allen, you CANNOT pick any other Buffalo Bills player. As you are probably figuring out, strategy plays a huge part in picking your players.

There are a million and one ways to construct your roster. My best advice on how to start is to write done each team, and the players you believe to be relevant on those teams. Then look at the teams you believe will either make the Super Bowl or at least the conference championships.

Those teams should help build a base for your roster construction. You also don’t want to take a kicker or defense from those teams either.

Furthermore, once you have established your premier teams, look at the bottom-of-the-barrel teams as well. That would be teams you don’t believe make it past Wild Card Weekend. Those teams will be the ones you want to choose a kicker and defense from. Remember that there will be two teams you don’t select a single player from.

Anything Can Happen In The FFPC Playoff Challenge!

Make sure you think about NFL narratives, game theories, and playoff scenarios for each team if they win(who could they potentially play the following week or two). If you think about it, you can really get down to the nuts and bolts of it all by also considering Super Bowl correlation.

For example, if you believe the Bills and the Eagles make it to the Super Bowl, which player from each team would you want to have? Obviously, you can’t have both Josh Allen and Jalen Hurts, but you could have Josh Allen and AJ Brown. Again, this is all hypothetical but still something to think about and consider because all these things can really help you build your perfect team!

Last piece of low-level strategy advice. Don’t get hung up on all the small details. Yes, it is important to think about different scenarios and who can score the most for their respective teams, but this contest is also a shit ton of fun. So do just that and have fun with it!

Chalk or long shot? Popular or different? Each position is a different animal and the thought process behind your selection needs to be methodical. In this section, I’m going to break down each position with the scoring, strategy, and relevant players available.

Interception thrown = Minus one point (-1)

The Quarterback position is an easy selection for me. Make it a QB you think can at the very least make it to the conference championship round. This should automatically eliminate a few Quarterbacks for you. The reason behind my thinking here is that the QB has the greatest potential to be the highest-scoring player on their team.

I’d argue that more than 75% of the time when a team makes it to the conference championship or the Super Bowl, it’s due to their Quarterback play. Now I’m not saying that this is a foolproof plan by any means. Kelce could easily outscore Patrick Mahomes due to FFPC TE premium scoring(see TE scoring rules). The odds of this happening though id say are slim.

My second thought on the QB position would be to take a QB who could be a contrarian play. For example, Tom Brady could make a run and make it to at least the NFC conference championship. I’d say most people will be looking to select Mike Evans, Chris Godwin, or Leonard Fournette. Selecting Brady and the Bucs making a run would give you leverage over the field.

The Running Back position is an open market for me in this type of contest. You don’t want to stray too far off the main path, but you can take a road less traveled. What I mean by this is it’s okay to be contrarian in this position. The player pool is shallow and you don’t want to be too chalky overall.

In all, you want to build the best team possible but you also want to do your best to seek out players that separate you from the competition just enough to get an edge. Leverage can be very valuable in these types of contests.

Loading up on Dalvin Cook or Travis Etienne may not be the best play as I believe that both the Vikings and Jaguars could lose this weekend. On top of that, neither of them may score the most fantasy points on their own teams. If both of these things happen then you would have wasted a valuable positional pick on these players.

The type of Running Back I am shooting for is someone who can catch the ball, has a good chance to advance past the wildcard round, and could be the best positional player on their team.

1.5 points per Reception for TEs

As I eluded to in the Running Back strategy section, you want to be a little chalky with some of these WR picks but also consider all scenarios and situations. It’s fine to want to take DeVonta Smith over AJ Brown or Tee Higgens, but don’t be that guy who thinks taking KJ Osborn over Justin Jefferson or TJ Hockenson is the way to be contrarian.

Wide Receivers have an advantage over Running Backs due to this being PPR (Points Per Reception) scoring. So this would lead me to believe you probably want to use at least two of your flex spots on WRs, even with the Tight End premium scoring.

The Wide Receiver position could be where you have the most flexibility to be different with your build. Most of these teams have at least 2 WRs that would be relevant picks. This gives you options and a way to be a little different.

Again, think about game theory, which teams could throw the ball more often than not throughout the playoffs, and which WRs could surprise a bit.

DON’T FORGET! If you haven’t signed up for FFPC yet, Click the link. http://sg.pn/ffpc  Or feel free to use our PROMO code, SGP, at sign up and get $25 off of your first $35 or more entry fee. Again, that is promo code SGP.

1.5 points per Reception for TEs

Since the scoring favors TE with 1.5 points per catch this allows us to get funky and pick more than one TE. An easy way for us all to be contrarian. Now buyers beware, the trends show that choosing more than 2 TEs is not optimal. I don’t fully believe that has to be the end all be all of the discussion though.

There are some really good TEs in the playoffs and it’s not super crazy to pick them over the other players on their teams. I’d say sticking between 1-3 TEs is the best way to build your roster, more than 3 TEs seems excessive.

The obvious choice here is Travis Kelce, and rightfully so. He is a DAWG! With that said, I am going to assume most people are picking Kelce as their TE. So I don’t want to be overly heavy on my Kelce exposure. However, as someone who isn’t just making 1 lineup, I’d be remiss if I didn’t at least take him a couple of times.

The TE position should be a player you at least expect to make the conference championship. Having a TE in the Super Bowl could be important due to the TE premium scoring along with the double points. Each catch would be worth at least 3 points plus the yards. Just something to keep in mind.

What to do with Kickers and Defense?

The Kicker and defense positions are intriguing to say the least in this playoff challenge format. From the research I have done, the consensus is that you want a Kicker or defense on a team that won’t make it to the Super Bowl, but at least has a strong chance to make it past the first round.

Essentially don’t go picking the Bills’ defense or kicker. This is because they could make the Super Bowl and they have other players on their team (Josh Allen, Stefon Diggs) that would most likely score more points throughout the playoffs.

On the flip side, a team like the Buccaneers could be a good candidate for the Kicker or defense pick. They could beat Dallas in the Wildcard Round and then lose the following week.

Really there is no secret sauce to these positions. Though I feel like you could automatically eliminate the Kicker and defenses for any team you feel could make the Super Bowl.

1 point for every sack

2 points for every team takeaway (interception or fumble recovery)

2 points for every return after a blocked/failed extra point or failed two-point try (i.e. on an interception or fumble).

5 points for every safety

12 points for every shutout

8 points for allowing between 1- 6 points

One last time for the people in the back. If you haven’t signed up for FFPC Playoff Challenge yet, Click the link. http://sg.pn/ffpc  Or feel free to use our PROMO code, SGP, at sign up and get $25 off of your first $35 or more entry fee. Again, that is promo code SGP.