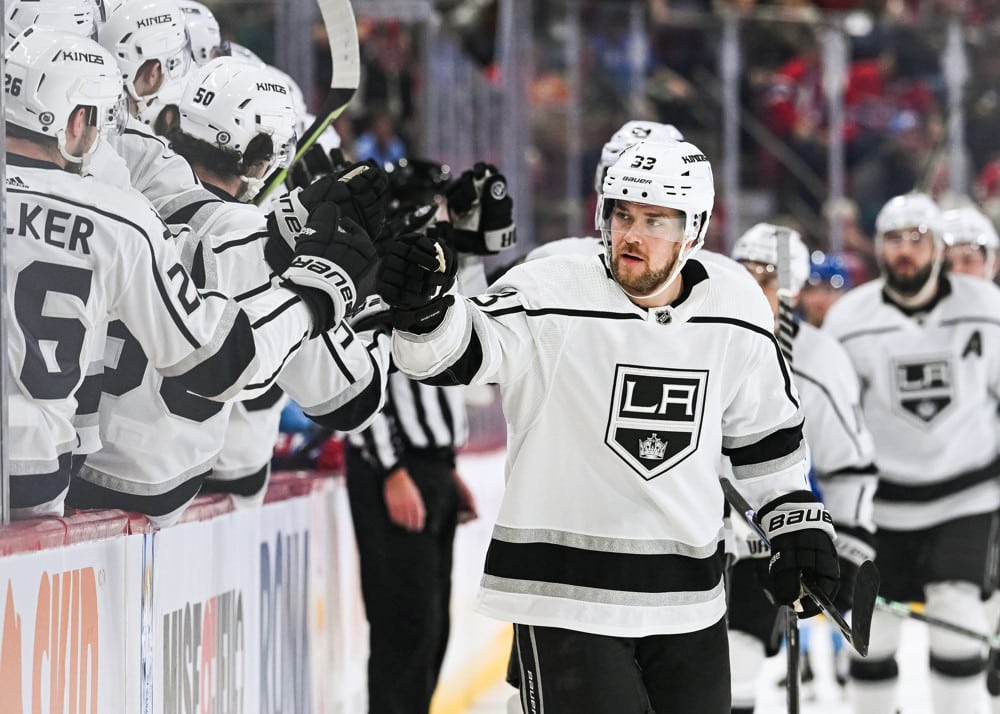 Viktor Arvidsson‘s two-game goal-scoring streak has propelled him to the spot of top-rated player available on the majority of fantasy hockey waiver wires. Over his past two games, he has two goals, an assist, is +2, and has six shots on net. The L.A. second-liner has always been a solid goal scorer, averaging 23 goals over his last six seasons, but this year he’s added playmaking to his skillset. His career-high of 32 assists in a season is well within reach for him.

We stick in La La Land and we stick with the Kings’ second line, and recommend taking a look at Arvidsson’s center, Phillip Danault. Since I wrote about him last week, he’s had a three-game point streak, with a goal and two assists. That’s what happens when you get the Best Fantasy Hockey Waiver Wire Pickups column rub. Danault continues to trend toward having a career-best offensive season.

Yep – another Kings player. Sean Durzi is having a very solid sophomore campaign as a top-four defenseman for Los Angeles, and has a goal and an assist over his last three games. And the game he didn’t register a point in – his last game – he got three shots on goal and blocked five pucks. While he blocks a lot of shots, his 11 power play points are a real bonus for a defenseman.

I know what you’re thinking – Brady Skjei got traded to the Kings?! No, no – I’m finally including a non-Kings player on the list this week. Skjei’s eight goals are tied for eighth-best among defensemen in the NHL this season, and he’s only one goal away from tying his career high of nine he netted last season. And he helps you out greatly in the plus-minus, shots on goal, and blocked shots categories as well.

Despite having his four-game winning streak snapped last outing, I’ll continue to bang the drum for Capitals’ backup goalie Charlie Lindgren. Having split the previous six seasons as a professional between the AHL and the NHL, Lindgren seems to have found a home in D.C. His 11 wins are tied for 20th best in the league; his 2.60 goals against 14th best; and his .912 save percentage is 20th. If it wasn’t for teammate Darcy Kuemper‘s similar exemplary play, Lindgren would be a lock as the #1 keeper in Washington.

We’ll stick with the backup goalies this week since the starters available are abysmal. Filip Gustavsson actually has better numbers than Minnesota’s #1, Marc-Andre Fleury, this season, so maybe he’ll start to see an increase in minutes between the pipes. As it is, Gustavsson’s goals against average of 2.25 is second-best in the league, and his .924 save percentage is third-best.