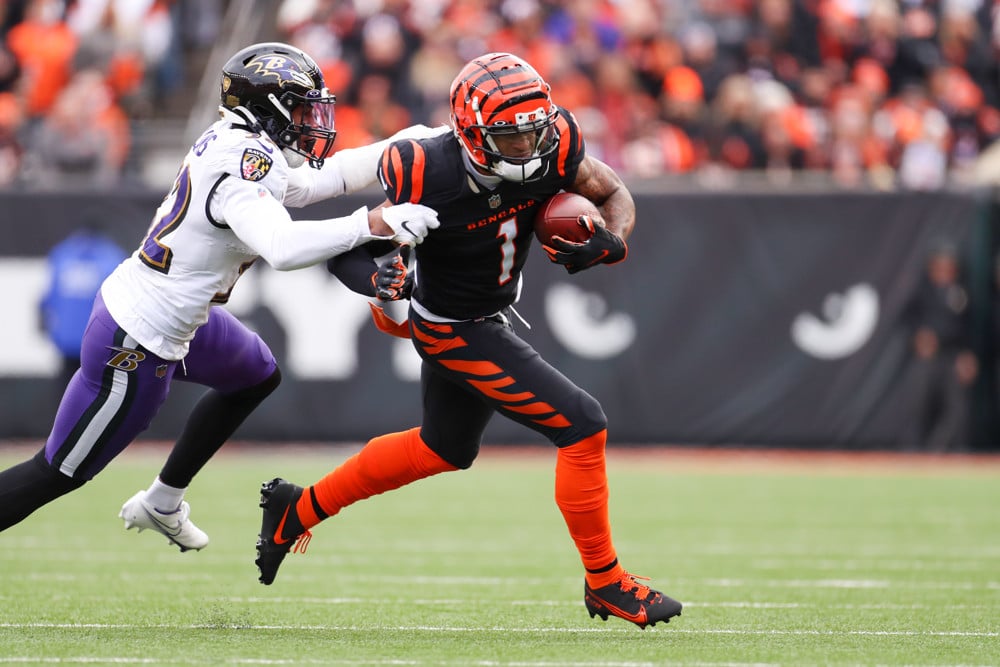 The guys (@GamblingPodcast) break down all the NFL Week 18 action in their NFL playoff schedule reaction podcast. They give out all the NFL playoff lines available at WynnBET and then fire off a playoff fantasy football best ball draft.

After a long NFL season, Week 18 brought along the end of the regular season. By this point of the season, the losers seem to be trying to lose, and the winners are fighting for postseason positioning. Even still, the limbo of the last week allows for a showcase of moments. The Bills put on a show against the Pats in honor of Damar Hamlin in thanks to two Nyheim Hines return touchdowns.

You got to be fucking kidding me KALIF RAYMOND WAS IN!!!!

The Eagles clinched the 1 seed in the NFC with a win over the resting Giants. Sam Howell and the Commanders found a way to sour the Cowboys one more time before the playoffs. Dak Prescott takes the crown of the most interceptions in the NFL, even with missing 5 games. Mike Tomlin also gets another season of a positive record even without his best player TJ Watt for a decent portion of the season.

The Dolphins found a way to sneak into the playoffs with a win over the Jets in possibly the best example of the reverse barn burner all year. The Seahawks certainly made it hard for themselves as they beat the Rams in Overtime to close the year. With this win and the Lions beating the Packers, the Seahawks were able to sneak into the 7th seed. The struggling Texans beat the struggling Colts, but the Texans still let head coach Lovie Smith go. The Chargers nobly put out their starters, but still suffered a loss and saw Mike Williams experience back spasms.

The NFL Playoffs come around quickly, as Wildcard Weekend comes up this weekend, the matchups are now set. On Saturday, Seahawks visit the 49ers at 4:30 and the Jaguars host the Chargers at 8:15. On Sunday the Dolphins play the Bills at 1, the Giants travel back to Minnesota to face the Vikings at 4:30, and the Bengals host the Ravens at 8:15 to close the night. Monday hosts a single game battle with the Cowboys traveling to Tampa Bay to face the Buccaneers at 8:15. The Eagles and Chiefs will both be on bye this week and play the lowest remaining seed after.

The 49ers are 10-point favorites against the Seahawks. Even though it is hard to beat a team 3 times, Geno Smith has looked rough as of late and the 49ers have a strong rush defense.

Bills Dolphins comes in with the Bills as 11-point favorites. The Dolphins are spiraling at quarterback and the Bills have high spirits as they continue to play for Damar Hamlin. However, the spread could be too large, especially if we see Tua or Teddy.

Sunday afternoon the Giants are 3-point road dogs in Minnesota. With the extra rest the Giants could shock the Vikings especially with the return of Adoree Jackson to cover Justin Jefferson.

Without Lamar most likely for this game, the Ravens are 6.5 dogs against the Bengals. Tyler Huntley is also banged up, putting the Bengals in a good position.

The Cowboys are favored on the road against Tampa Bay at -3. Both of these teams have proven to be underwhelming this season and might be lucky to be here. Dak has looked terrible recently and is not giving bettors confidence.

The underdogs look strong in this wildcard!